Home » We think we’re in control of our lives…’

We think we’re in control of our lives…’ 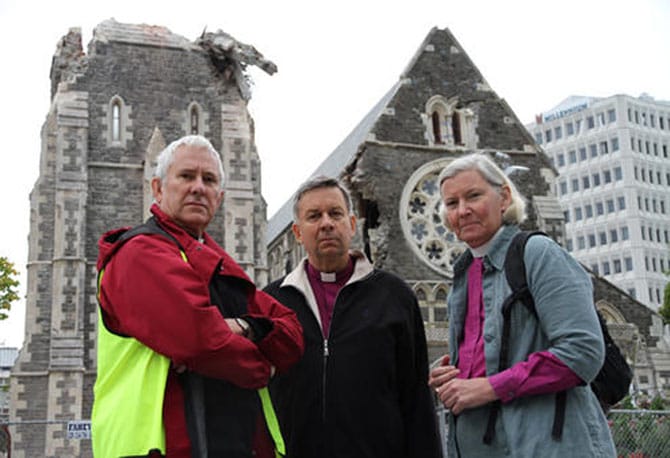 Dean Peter Beck, Co-presiding Bishop and Archbishop of the Anglican Church in Aotearoa, New Zealand and Polynesia David Moxon, and Bishop Victoria Matthews. Behind them is the partly destroyed Anglican Cathedral. Photo:Anglican Taonga

In the midst of the turmoil and chaos that ensued after the Feb. 22 earthquake that devastated Christchurch, New Zealand, a calm, reassuring woman was being interviewed by New Zealand radio interview.

She talked about the extensive damage to churches and property that she saw. But, mostly, she stressed the importance of caring for the people who had been traumatized by the disaster. That voice belonged to Victoria Matthews, Bishop of Christchurch in the Anglican Church of Aotearoa, New Zealand and Polynesia, who is a veteran of many challenges.

Before becoming the first woman bishop in the Anglican Church of Canada in 1993, Bishop Matthews and women priests before her had to struggle with the resistance to the ordination of women. In 2004, she battled breast cancer. Nothing, it seems, fazes her, not even a killer earthquake. Even before becoming bishop of Christchurch in 2008, Matthews already knew that aside from its natural beauty, New Zealand was prone to earthquakes.

In a 30-minute telephone interview with Anglican Journal staff writer Marites N. Sison, Bishop Matthews reported that more than 160 bodies have been recovered from the rubble as of March 3. There are still about 200 people missing and some may never be identified. Excavation work also continues at Christchurch Cathedral, where an estimated 22 people are believed to be trapped.

She also talked about what the disaster has meant for the church and the people of Christchurch. What follows is an excerpt of that interview.

Q: How are you? Are reports about your home being destroyed accurate?

A: I am fine, thank you. I wouldn’t say [my home was] destroyed, [but] it is badly damaged, no doubt about that. And it is deemed unsafe. I’m sleeping out behind the house.

A: Not in a tent. There is a separate structure where I have a sleeping bag, but there’s running water and electricity so I’m camping out there. I can still pick up wireless Internet from the house. Few places have that, so it’s still advantageous.

Q: During the early days of the disaster, you said people were enormously anxious. Has the mood changed at all?

A: People are traumatized, but at the same time there’s an amazing amount of constructive energy. The Kiwis, as the New Zealanders call themselves, are a very close community. And the desire to help one another is extraordinarily strong and that gives people hope.

A: It reminds me that life is precious and never should be taken for granted. I happened to be in the restaurant when it hit. I was mid-sentence and the next thing, we were under the table taking shelter. Within one minute we went from totally normal to total chaos and destruction. We walked outside after it stopped. We saw that the building right across the road had completely collapsed; it was on the ground.

We think we’re in control of our lives in the First World, and in actual fact, life is every bit as fragile as it is in the Third World. But we ignore that. If it’s not an earthquake, it could be a tornado or hurricane, a forest fire or a flood. Nature is much, much stronger than humanity and every once in awhile, we become victims of the force of nature. But living in First World cities we forget that.

Q: The diocese had plans to set up pastoral centres. Are they up and running?

A: I was at a meeting of 200 to 300 clergy….We’re asking every priest and the lay leaders to go door to door checking on neighbors. One huge concern is the rise in domestic violence. When people feel they have lost control they often become violent towards people they love. The more you can strengthen community and just drop in on your neighbour and have a cup of tea, and say, ‘How are you doing? What can I do to help you?’ actually relieves tension. Isolation is one of the great, great dangers at this time.

Q: What message, if any, would you like to convey to Anglicans in Canada?

A: It’s the same message as I’m giving here, which is with the sense of total loss of control and a sense of helplessness comes a strengthening of faith and hope in something that is beyond the human. We had record-breaking attendance at church across the city on Sunday. We had huge numbers for the memorial on Tuesday and people are saying, “I can’t control what happens in the next hour, but I can have a relationship with the God of love and love is stronger than death, love is stronger than any earthquake. If I can re-establish a relationship with God and neighbour, that relationship with God and neighbour will see us through whatever the next hours, weeks, months and years bring.

Q: What can Anglicans in Canada do to help?

A: We will be doing a fundraiser to rebuild the city of Christchurch. Virtually all our Anglican schools in the city have been badly damaged, roughly 26 churches. Plus there will be ongoing pastoral care and emergency services needed for people who are living right at the edge. I know the world is praying for us and I would say, ‘please, don’t stop’. We need the prayers of Canadians and those around the world so that we keep our hope and our determination.

Q: What do you pray for these days?

A: I’m praying that people will be able to remain focused and able to do the job without either anxiety or distress getting in the way. The trauma has caused what we call “earthquake brain” and it means that it’s very hard to do the basic things, [because] you are so distracted. [I’m also praying] for the families of those who have died, who are injured and those who are missing.

Q: Oftentimes disasters either strengthen or weaken people’s faiths. Have people asked you the inevitable question, ‘Why did this happen?’

A: It’s very important, first of all, to say this is not God’s punishment on Christchurch for any sinfulness. Not that we’re not sinful, but it’s just not God’s way… Secondly, I think people’s faith is actually being strengthened because there’s a fundamental question about where do we find meaning. And you no longer find meaning in having a nice big car or a big office or a beautiful home because all those probably went on the 22nd of February.

Where does one find meaning? One finds meaning in love and life and community. Community means not only community with other humans, but community with God who is Father, Son and Holy Spirit.

Q: You don’t emerge from this experience without being changed. How has this changed you?

A: I think the real answer will probably be a year from now. At the moment there are some very, very basic changes. It sounds ridiculous, but I don’t go anywhere without a wind-up torch, that’s a flashlight in Canadian terms, which you don’t need batteries because it’s self-generating if you wind it up. I don’t go anywhere without a bottle of water because you don’t know where you could get stranded if it hits again. I always have my mobile phone charged because if there’s another earthquake it may be my way of telling people where I’m trapped…Even where you sit changes. It sounds ridiculous. But you don’t sit under a light fixture. You don’t sit near a bookshelf that could come down on you… Two nights ago we had an after-shock of 4.6… You tend to sit in a room if the weather’s good, which it has been, with the door open, in case you need to get outside quickly. It’s very little things but they become part of how you live.

One of the first things I learned in New Zealand because I knew of the threat of earthquake is that I always have my shoes right beside the bed as well as a flashlight and because one thing that always happens is broken glass. You actually need to have good strong shoes if you’re going to get out of the house without lacerating your feet. It sounds over the top but it’s absolutely real.