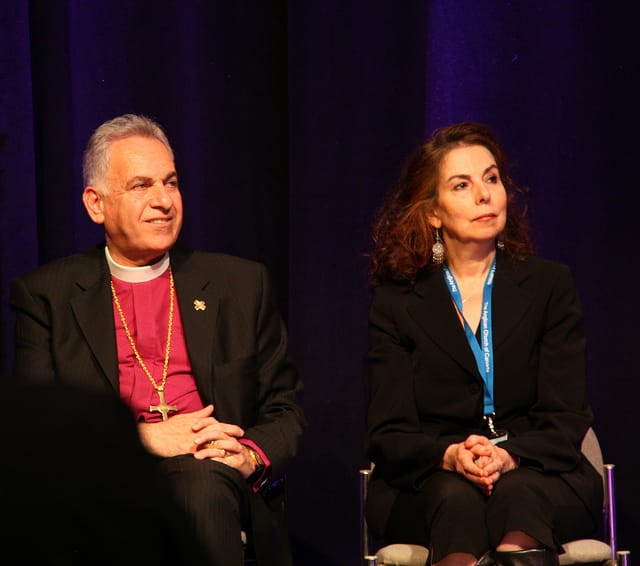 Diocese of Jerusalem Bishop Suheil Dawani and his wife, Shafeeqa, at the 2010 General Synod of the Anglican Church of Canada. Photo: General Synod Communications

The Anglican bishop in Jerusalem, Suheil Dawani, has asked an Israeli court to intervene after Israeli authorities revoked his residency permit alleging he has engaged in anti-Israeli activities.

After receiving no response to repeated attempts to clear his name and to resolve the matter “with restraint,” Bishop Dawani said in a press statement that he has no recourse but to seek redress through the Israeli justice system.

Israel’s Ministry of Interior denied the renewal of “Temporary Residency Status” in Jerusalem to Bishop Dawani, his wife and their youngest daughter effective Sept. 24, 2010, said the press statement.

Although Bishop Dawani is a native of the Holy Land, under Israel’s Citizenship and Entry Law, he cannot obtain citizenship or legal residence in Israel since he was born in Nablus, which has been under Israeli occupation since 1967.

Bishop Dawani said that he tried to renew the permits in August 2010 and was informed in writing that they were being denied because of allegations pending against him. He added: “The letter, in Hebrew, included the following: ‘Bishop Suheil acted with the Palestinian Authority in transferring lands owned by Jewish people to the Palestinians and also helped to register the lands of Jewish people in the name of the Church.’ ” He was also accused of forging documents, said Bishop Dawani.

According to Bishop Dawani, several religious and political leaders have tried to intervene on his behalf. The Archbishop of Canterbury, Rowan Williams, has been in contact with the office of the Prime Minister of Israel and Israel’s Chief Rabbi Shlomo Amer. Archbishop Williams “received assurances that the situation would be resolved promptly,” said Bishop Dawani. Anglican leaders, including the primates (senior archbishops) of the Anglican Communion also “used their influence individually and collectively with Israeli authorities without success to date,” said Bishop Dawani.

Elected in 2007, Bishop Dawani was recognized by the State of Israel as head of the Episcopal Diocese of Jerusalem, which is one of the 13 recognized churches in Israel. The Bishops’ residence, diocesan offices and cathedral are located in Jerusalem.

The ministry of the diocese extends to Lebanon, Syria, Jordan, Palestine and Israel. It has 27 parishes and supports 33 institutions that run hospitals, clinics and schools.
In June 2010, Bishop Dawani and his spouse, Shafeeqa, attended the Anglican Church of Canada’s General Synod in Halifax as observers. In an address to General Synod, Bishop Dawani urged Canadian Anglicans to support the peace process in the Middle East. He also spoke about how the continuing violence and “rise of extremism” has foced more Christians to leave the Holy Land.

Bishop Dawani talked about how the ministries of Christians in Jerusalem have become a “bridge” for Muslims and Jews and have helped stem the growth of extremism.

The diocese operates schools that are open to anyone regardless of gender, race and religion. It runs 13 schools with 7,000 students, 70 per cent of whom are Muslim and 30 per cent Christian.

The diocese also plays a crucial role in inter-faith relations.