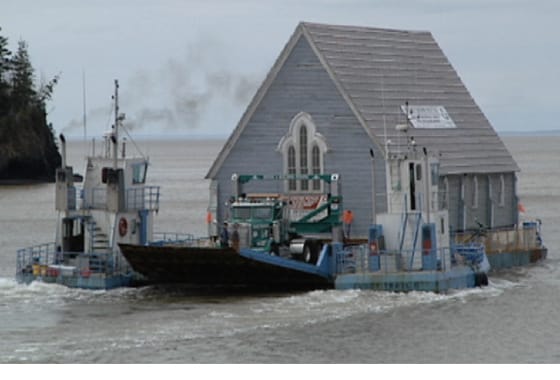 De-consecrated St. Matthew’s Anglican Church is ferried across the Bay of Fundy to begin its new mission as a local winery. Photo: cbcnews.ca

If Christ turned water into wine, a watery journey has helped turn one of Christ’s churches into a wine store.

On May 5, a converted ferry laboured along the treacherous Bay of Fundy and up the Avon River carrying 30-tonne, 19th-century St. Matthew’s Anglican Church from its original site in Walton, N.S., to Newport Landing in the Annapolis Valley.

“St. Matthews had a journey lasting just over 24 hours riding tides that fell and rose over 43 feet,” says Stewart Creaser, the vintner who, with his wife, Lorraine Vassalo, purchased the church last year. St. Matthew’s had to wait out the winter by the bay before it was safe to move it. From the landing, the pale blue wooden house of worship, begun in 1837 and opened in 1844, will travel this week by flatbed truck about a kilometre down the road to its new home at the Avondale Sky Winery.

Creuser and Vassalo bought the church for the same price paid in 1837 by its original congregation— $1.67—when they were looking for a building to house their new wine store and learned that the simple yet elegant church was scheduled for the wrecking ball. It closed its doors to a congregation of just four people and underwent deconsecration in 2008. “We couldn’t stand to know that if we couldn’t give it a new home, it would be destroyed,” says Creaser. “Moving it wouldn’t be easy, but we were confident it would be worth the effort.”

Adds Ted MacDonald, former warden of the parish, “The parishioners were sad to see it go, but preferred to have the building removed or demolished rather than left to decay on its old site.”

Renovations will soon be under way, and the wine store is expected to open in early August. “The pews were missing, but the kneeling benches are still there, as well as a baptismal font, and we hope to incorporate these into the new space,” says Vassalo.