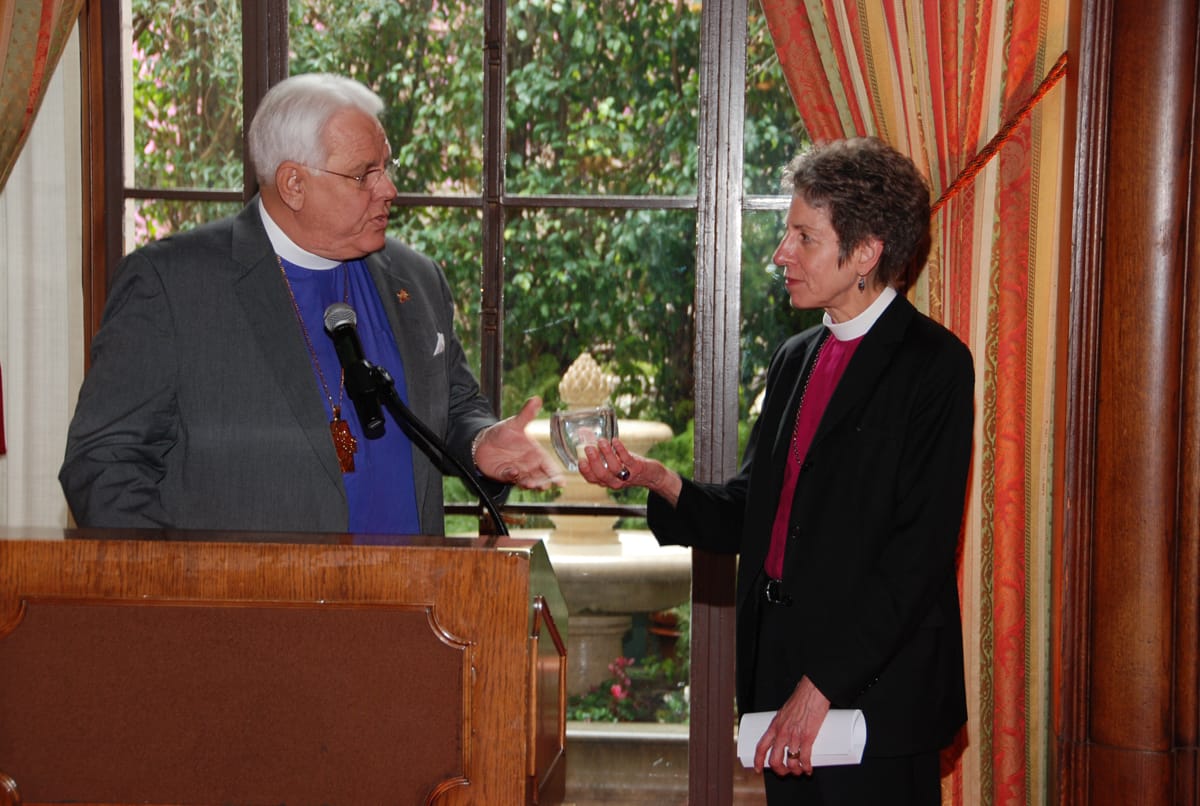 Presiding Bishop Katharine Jefferts Schori urged Episcopalians to “invest in legitimate development in Palestine’s West Bank and in Gaza” rather than focusing on divestment or boycotts of Israel, during a March 25 “Middle East Peacemakers” luncheon in Los Angeles.

She also called for “a two-state solution with a dignified home for Palestinians and for Israelis” and for “deeper engagement, people of different traditions eating together, listening to each other’s stories,” she said, adding that the interreligious, multi-ethnic gathering hosted by Bishop J. Jon Bruno of the Diocese of Los Angeles was an example of what is possible.

Bruno concurred. “Bishop Katharine and I have the same opinion about peace in Jerusalem and what kind of settlement should be taking place there, and we checked it out with Bishop Suheil Dawani and he agrees with us,” he said.

Dawani also addressed the gathering, which raised in excess of $50,000 for ministries and pilgrimages in the Episcopal Diocese of Jerusalem as part of the companion relationship with the Diocese of Los Angeles. Dawani echoed Jefferts Schori’s call for deeper engagement through visits and relationship building with “the living stones,” the people of the land who face economic hardship and such other challenges.

Because of concerns about “the Christian community (where) we are losing so many young families and young people who leave and look for a better future outside our land,” education and formation for young people is a major priority, he said.

The Diocese of Jerusalem sponsors some 20 educational institutions for more than 6,400 Arab children regardless of faith. They include kindergarten through high school classes and centers for children with special needs, as well as technical and vocational institutions.

Dawani noted especially “Educate for Hope,” an initiative founded several years ago by Mary Bruno, spouse of Jon Bruno, which helps educate children in Zababdeh, one of the few remaining predominantly Christian towns, located between Nablus and Geniene in Palestine. Funds administered through St. Matthew’s Episcopal Church in Zababdeh seek to help children build lives for themselves, stay in their home country, and help stem the steady decline of the Christian population in the Holy Land. Educate for Hope now sponsors about 56 students each school year, at a cost of about $700 per child.

Similarly, the Department for Peace, Reconciliation, and Interfaith Dialogue, created when Dawani was enthroned as the 14th Bishop of Jerusalem in 2007, oversees Kids4Peace, a program that brings Christian, Jewish and Muslim children from the Holy Land to summer camps with their U.S. counterparts in for peace-building and formation, Dawani said.

The department also oversees other interfaith peace-building efforts, including a continuing emphasis on women’s empowerment. An upcoming interfaith women’s conference will further those efforts by bringing women together for prayer, conversation and leadership training.

Dawani also praised the contributions of American Friends of the Episcopal Diocese of Jerusalem, which offers support for many ministries and projects.

Emphasizing the need for Jerusalem to “remain open for all,” he added, “We need your support to work for peace and justice.

Encouraging visits to the Holy Land he said, “It is very important for our people when you come and visit,” adding that such visits offer hope and that the diocese values its partnership with other dioceses throughout the church.

“Our hearts always welcome you. Please come and visit us,” he said.

The diocese encompasses 6,000 Anglicans in 27 parishes throughout Jordan, Palestine, Israel, Syria and Lebanon, and more than 30 schools and healthcare institutions, educating about 6,400 students in schools, employing about 1,500 people and maintaining about 200 hospital beds.

Prayers were offered at the start of the luncheon by Rabbi Joshua Levine Grater of the Pasadena Jewish Temple and Center and by Shakeel Syed, executive director of the Islamic Shura Council of Southern California.

Bruno presented both Dawani and Jefferts Schori with a glass globe inscribed with symbols of the three Abrahamic faiths, including the Jewish Star of David, the Islamic crescent moon and the Hands in Healing cross-a cross made of hands of all colors reaching out to hold each other, the iconic representation of his ministry as bishop of the Diocese of Los Angeles.

The globes were unveiled during the “One Light, One Faith, One Peace” interfaith service Bruno organized to commemorate the tenth anniversary of the Sept. 11, 2001 terrorist attacks. Hundreds of Christians, Muslims and Jews, in addition to civic leaders, attended the event on the steps of the Los Angeles City Hall on Sept. 10, 2011. A representative from each congregation, synagogue and temple served as designated “light-bearer” to take a globe back to his or her house of worship as a reminder of hope and the need to work for peace.

“It has a candle inside it and I pray when you get discouraged you light the candle and pray for the peace of Jerusalem,” Bruno told Dawani.

Olive tree centerpieces were the gifts of the American Friends of the Episcopal Diocese of Jerusalem and offered to anyone who wanted them, provided they were to be planted in a church or school yard as a symbol of peace, Bruno told the gathering.

Jefferts Schori described a previous visit to the Holy Land at Dawani’s invitation several years ago, just before Easter and Passover, when she encountered both suffering and pain but also hope of new life through interfaith collaboration in the West Bank and Gaza.

“We met the faithful of several traditions who in spite of and likely because of their daily experience were engaged in hope-filled living, bridge-building, seeking understanding, finding ways to work together,” she said.

“We saw hope and healing for all at the Al Ahli Arab Hospital,” an institution of the Jerusalem diocese.

“Wherever we went we met communities of Christians and Muslims working together. We met leaders of all three Abrahamic faith traditions working together for peace. We met others including representatives of this [Los Angeles] diocese who come to the land of the Holy One to learn and listen, to pray and to build relationships.

“Pilgrimage forms peacemakers people who stand in solidarity with those who suffer,” she said.

She added that the Diocese of Jerusalem “is a deeply faithful leader of peace-building, often one person and one encounter at a time.” She urged Episcopalians to support the ministries of the diocese.

“They continue to seek partners of solidarity and witness like the people gathered in this room. They continue to seek support for their work of educating and forming new leaders of different faiths to be peacemakers. They develop health care and healing ministries to serve people of all faiths. They are advancing interreligious dialogue, building solidarity and bridges of understanding. They’re developing social and economic infrastructure in Palestinian territories. They are helping to build a society of peace with justice for all, the city of Salaam and Shalom.”

But, she added, there is no quick fix to the Middle East conflict.

Ultimately, peace will take “continued engagement,” the presiding bishop said. “It takes living out of the deep place of hope. Out of the deep and soul searing sort of hope, the kind that is borne of rejecting fear. What can we do here?

“I would urge you to pray for the peace of Jerusalem, to pray and work together for a society of peace with justice for that vision that is shared by all Abrahamic faiths. Salaam, shalom, peace.”

? The Rev. Pat McCaughan is a correspondent for The Episcopal News.