Home » Environmentalist gets busy for his grandchildren

Environmentalist gets busy for his grandchildren 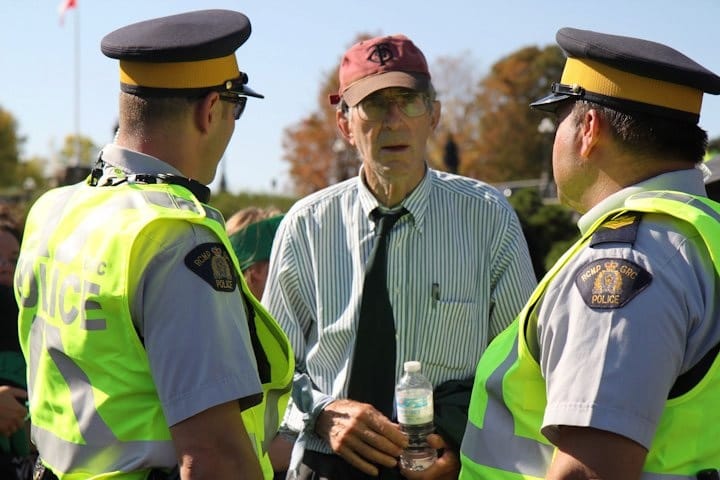 Anthony Ketchum was arrested last September at a Parliament Hill protest against the expansion of the Alberta oil sands and reliance on fossil fuels. Photo: Contributed.

Anthony Ketchum, a passionate environmentalist and family man, shows his love for his grandchildren by lobbying all levels of government for legislation that will effectively deal with climate change. He’s even prepared to make his point with acts of civil disobedience, which got him into hot water recently at a protest rally on Parliament Hill in Ottawa.

Among other things, Ketchum and other concerned grandparents who have formed the environmental action group “For Our Grandchildren.” They are currently in the midst of a new letter-writing campaign aimed at MPs, senators and provincial MPPs and their last campaign received some very high profile support.

“It’s a lot of envelope addressing, I can tell you,” says Ketchum, a former English teacher, who lives in an off-grid house he built after retirement. “A lot of people still think it’s a matter of recycling and turning the lights out,” he says. “That’s not going to help us in the current crisis.”

Five recipients of the Order of Canada signed the first letter For Our Grandchildren sent out. They included Walter Pitman, former president of Ryerson University, and a member of the For Our Grandchildren steering committee; Dr. John Evans, former president of the University of Toronto; David Crombie, former mayor of Toronto; John Polanyi, a Nobel prize-winning scientist and author Margaret Atwood. Other humanitarians such as Archbishop Emeritus Desmond Tutu and Stephen Lewis have accepted invitations to be honorary members of the steering committee.

On the group’s website, forourgrandchildren.ca, recommendations for resources are provided as well as ways to get involved. “It’s a matter of trying to educate people,” says Ketchum. Videos made by For our Grandchildren are posted on the website; one of them was seen at the United Nations Climate Change Conference in Durban, South Africa, last November.

Sometimes making a difference requires putting yourself on the line. Last September, when Ketchum went to Ottawa to take part in a protest on Parliament Hill against the expansion of the Alberta oil sands,he was arrested and charged for trespassing when he climbed over a police fence. Although he says he was prepared to go to jail, he was released from custody after being driven off Parliament Hill. “…we are prepared to be civilly disobedient [when] we feel the policy is fundamentally mistaken,” Ketchum told the Anglican Journal. “We cannot accept that the treatment of this creation is morally justified.

Importantly, the group thinks it can make a difference. “The situation looks pretty bleak but we do have hope,” says Ketchum. “As Desmond Tutu says, the powerful vested interests need to be challenged…. [He] reminds us that it is a moral universe and we don’t need to feel powerless. We can be agents of change.”

On May 6, at 2 p.m., For our Grandchildren is hosting a town hall meeting at Yorkminster Park Baptist Church in Toronto. Guest speakers include environmental journalist Alanna Mitchell; Stephen Scharper from the University of Toronto’s Centre for the Environment; Glen Murray, Ontario minister of economic development and innovation; and Glenn McGillivray, managing director of the Institute for Catastrophic Loss Reduction.