Home » Please keep us in your prayers’

Please keep us in your prayers’ 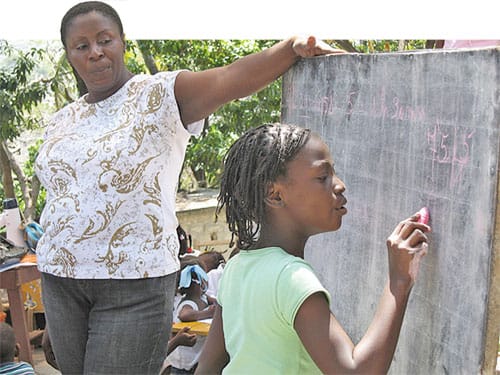 A portion of PWRDF funds will support big tent classrooms.

A Canadian Anglican who recently visited earthquake-ravaged Haiti said her experience “leaves no illusion that quick fixes or neat solutions will work.”

Writing on her blog, notes.anglican.ca/haiti, Mann said that while the clearing of rubble and rebuilding work has begun, “the scale of devastation to human life, land, local economies, physical infrastructure and future generations has been enormous.” More than 250,000 people are believed to have died and nearly all buildings and homes in and around Port-au-Prince were flattened from the 7.0 magnitude earthquake that hit Haiti on Jan. 12.

Life continues to be a “living hell” for hundreds of thousands of people there who are “homeless, jobless, school-less, without the tools of their trade, without transportation, reliable or safe food and water, living vulnerable to illness, trauma, violence and further loss as hurricane season descends,” wrote Mann.

Mann visited the Episcopal diocese of Haiti parishes in Port-au-Prince, Leogane, Hinche, Cange and Montrouis from March 23 to 30. Naba Gurung, humanitarian response co-ordinator of The Primate’s World Relief and Development Fund (PWRDF), travelled with Mann on some parts of the trip and also spent his time meeting with emergency and relief groups.

“Over and over again, people were saying, ‘Merci beaucoup. Thank you for your prayers. Thank you for the parishes and churches that have remembered us and supported us. Please continue to keep us in your prayers,'” said Mann in an interview. Her visit was co-ordinated by Canon Oge Beauvoir, principal of the Episcopal diocese of Haiti Seminary, and co-ordinator of the crisis committee set up by the Haiti church in the earthquake’s aftermath.

Mann noted that continuing short-term needs such as temporary housing, schools and hospitals are being met with financial support from overseas. At the recent UN Conference on Haiti, the international community pledged $5.3 billion in new aid for Haiti’s reconstruction in the next two years. However, long-term support will be needed to rebuild church buildings, other structures like seminaries and permanent homes.

Mann and Gurung visited St. Therese Park, a camp that is home to 4,356 displaced families. It is one of those supported by the Lutheran World Federation (LWF), with funding from PWRDF, as part of the Action by Churches Together (ACT) Alliance. PWRDF has received more than $2 million in donations for Haiti from Canadian Anglicans. It has identified $1.990.141 as eligible for matching funds from the Canadian International Development Agency or CIDA.

Mann also visited the Episcopal Church seminary, which still stands but is unsafe. “Estimates and plans for cleanup and restoration are underway,” she said.

Getting children back to school is one of the diocese’s major priorities, said Mann. Most elementary and secondary students have been out of school since mid-December, the start of the Christmas break, and had only been back to school for a day when the earthquake struck. More than 100 of the diocese’s 254 schools were damaged by the earthquake. “Remaining schools have been affected indirectly by the migration of families to regional towns and villages, adding thousands of students to classrooms and teachers’ workloads already stretched to capacity,” Mann said.

Gurung said a portion of the PWRDF donations will go toward supporting students in these Episcopal schools. Areas of support include big tent classrooms, school supplies, feeding programs, salaries for teachers, water and sanitation, and psycho-social support.

Gurung also identified shelter and livelihood as areas where PWRDF funds could be put to effective use. PWRDF is going to pool its resources with other church-based relief and development agencies in Canada under a coalition called Canadian Churches in Action (CCA), which collectively has raised more than $15 million for Haiti. The CCA is awaiting word from CIDA about its application for matching grants.

Mann described her visit as “quite overwhelming at times, intensely beautiful at times.”

In her blog, she writes, “I have been inspired by the sheer determination, courage and stamina of people struggling to survive. As our friend and partner Canon Oge Beauvoir says, ‘Life goes on.’ Indeed, in every way imaginable.” Juxtaposed against blazing bougainvillea, beautiful sunsets and mango trees heavy with fruit are “fires of burning garbage, salvaged cord low with laundry, and people meeting people where rubble meets the road,” writes Mann.

Meanwhile, Haiti Bishop Jean Zache Duracin has asked the bishop of the Convocation of Episcopal Churches in Europe, Pierre Whalon, to guide “what is expected to be a multi-step, multi-year and multi-million effort” to rebuild the Holy Trinity Cathedral in Port-au-Prince, Episcopal News Service (ENS) has reported. Ω