Home » New “igloo church” to rise from the ashes

New “igloo church” to rise from the ashes 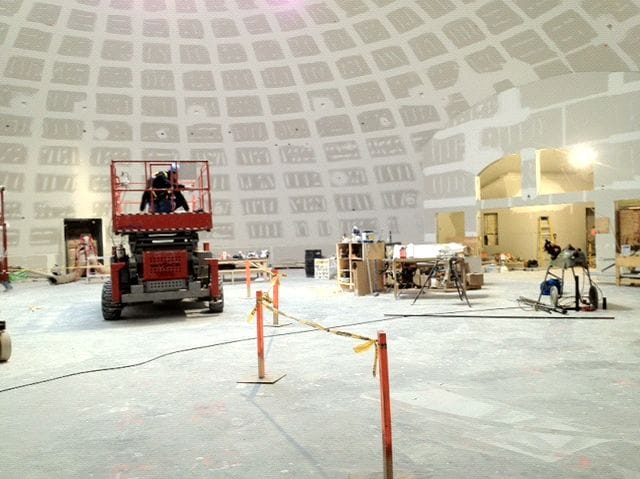 The new St. Jude’s Cathedral will be completed and formally turned over to the Arctic diocese on May 1. Photo: Diocese of the Arctic

The much-anticipated completion of St. Jude’s Cathedral in Iqaluit will take place on May 1.

That’s when NCC Dowland hands over the keys of the new “igloo church” to the diocese of the Arctic and the parish of St. Simon’s/St. Jude’s.

Anglicans and residents of Iqaluit will get a chance to worship at the new cathedral for the first time during the dedication service scheduled on June 3. The primate of the Anglican Church of Canada, Archbishop Fred Hiltz, and the metropolitan (senior bishop) of the ecclesiastical province of Rupert’s Land, David Ashdown, are expected to attend.

“We’re all excited, of course,” said Bishop Andrew Atagotaaluk. “It’s been a long process [but] I believe that in our faithfulness to the project, we’re going to have something greater.”

In fact, it has taken seven-and-a-half years and $8 million to build a new cathedral after the original church was destroyed by arson in 2005. What’s more, the diocese still has to raise $3.5 million to complete its payment to NCC Dowland.

The new St. Jude’s is made of stronger material than the wooden cathedral it replaces. It has a new metal clad dome, layers of fire resistant insulation, a sprinkler system, thick concrete floor and a security alarm system.

Like the old iconic cathedral with its white half-dome, the new St. Jude’s retains its distinctive dome-and-spire shape. The entrance hall simulates the entrance to a traditional snow house or “igloo” and the central portion of the cathedral will have a ceiling that rises 40 feet.

Like a new bride, the cathedral will be dressed in something old and something new. The altar, a gift from St. John the Evangelist church in the diocese of Edmonton, will be shipped for the June opening. New pews and chairs that can extend the seating capacity beyond 350 also have been ordered.

Artifacts and eucharistic vessels recovered from the fire have been cleaned and polished for their new home. The old communion rails and pulpit, made out of oak sleds, have also been recovered and installed.

Not everything may be ready for the dedication service, however, said Atagotaaluk. The curtains and hangings around the altar have been sent only recently to church women’s groups across the Arctic, who will embroider them with images of life in their church and community. The old cathedral’s embroidered tapestries, which were made by women from Igloolik, Puvirnituq, Inukjuak, Baker Lake, Arviat and Kugluktuk, were lost in the fire. Other cherished items destroyed include: a baptismal font from Puvirnituq that had a base of soapstone in the shape of an Inuit oil lamp; the soapstone top in the shape of a cooking pot came from the people of Inukjuak; and three supporting narwhal tusks were a gift from the people of Baffin Island.

Atagotaaluk said the diocese has received a donation of a six-foot narwhal tusk from the people of Taloyoak (Spence Bay) and is hoping another piece will be donated so that an ivory cross can be made for the altar. Many parishes and individuals have made contributions in various ways, noted Atagotaaluk, who singled out the diocese of Ottawa for its support.