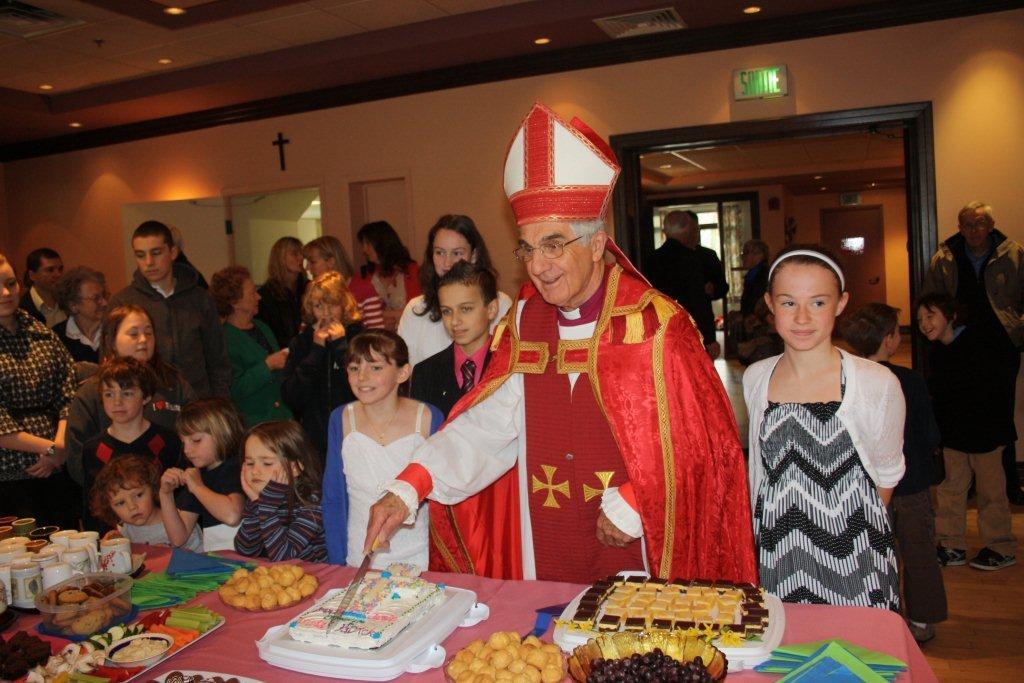 Bishop Leonard Whitten, former bishop of Western Newfoundland, is joined by confirmation candidates and other guests as he cuts the traditional cake after the confirmation. Photo: Harvey Shepherd

A casual visitor to either of two church services in the Montreal area Sunday (April 22) might have had no inkling that they were part of a historic effort to heal wounds resulting from doctrinal differences, especially ones related to homosexuality.

Bishop Leonard Whitten, retired bishop of Western Newfoundland, administered the rite of confirmation to five young people in the Church of St. John the Baptist in Pointe Claire, a Montreal suburb in the West Island area. At a lively prayer service that evening at St. Paul’s Church in Knowlton in the Eastern Townships, Bishop Barry Clarke of Montreal presented him with a licence to officiate as an assisting bishop in the Montreal diocese.

Whitten also scheduled a retreat with six clergy of the diocese in Sutton in the Eastern Townships Tuesday and Wednesday.

It was the first pastoral visit by Whitten to the Montreal diocese under an agreement worked out last fall by the two bishops, six clergy of the diocese and several of the parishes they serve. The clergy and parishes object to recent actions of Clarke and the diocese to accept same-sex marriages. These included the approval of a protocol for the blessing of civil unions, including same-sex ones, and the ordination or induction into parishes of several clergy with same-sex partners.

Former members left several parishes in the diocese of Montreal in 2009 to form two parishes of the traditionalist Anglican Network in Canada.

The shared episcopal ministry between Whitten and Clarke is the first effort in Canada, aside from one or two brief experiments on the West Coast some years ago, to put into practice a suggestion endorsed by the Canadian House of Bishops in 2004. It had been proposed the same year in the Windsor Report, a document from the Lambeth Commission on Communion.

Whitten, who is in his mid-70s and lives with his wife in Pasadena NL, voted against same-sex blessings at the international Lambeth Conference of Anglican bishops in 2008 and has been quoted as saying he still believes marriage, scripturally, is between a man and woman.

However, there was no discussion of same-sex unions or other specific doctrinal controversies-at least during the public portions of his visit to Montreal. The mood was upbeat at both the confirmation service, attended by close to 70 people, and the evening service, attended by more than 40.

Whitten devoted his morning sermon, directed largely to the young confirmands, to joy and delight in serving Christ and to the importance of prayer. He said it was perhaps the second confirmation at which he had presided since retiring as a diocesan bishop nine years ago. “I am pleased that Bishop Barry has asked me to do this and I will be pleased to help out in any capacity in which he wants to have me.”

Whitten’s evening sermon was about ministry. By accident or design, he made a point that has been a favourite of Bishop Barry’s on other occasions: the importance for Anglicans and parishes of not being content with maintenance but moving into mission.

In a brief conversations after the gathering, both bishops said they were pleased with the day’s events. Whitten said he hopes to be back, but has no specific information about when.

Rev. Tim Wiebe of St. Paul’s, one of the six clergy involved in the shared episcopal ministry, as well as pastor of the host church (and drummer in the upbeat quartet that accompanied the hymns) was also pleased. “It’s pretty early days (in the life of the ministry) but we wanted to celebrate this part,” said Weibe. “Bishop Barry has been very gracious.”

Harvey Shepherd is editor of the diocesan newspaper, The Montreal Anglican.