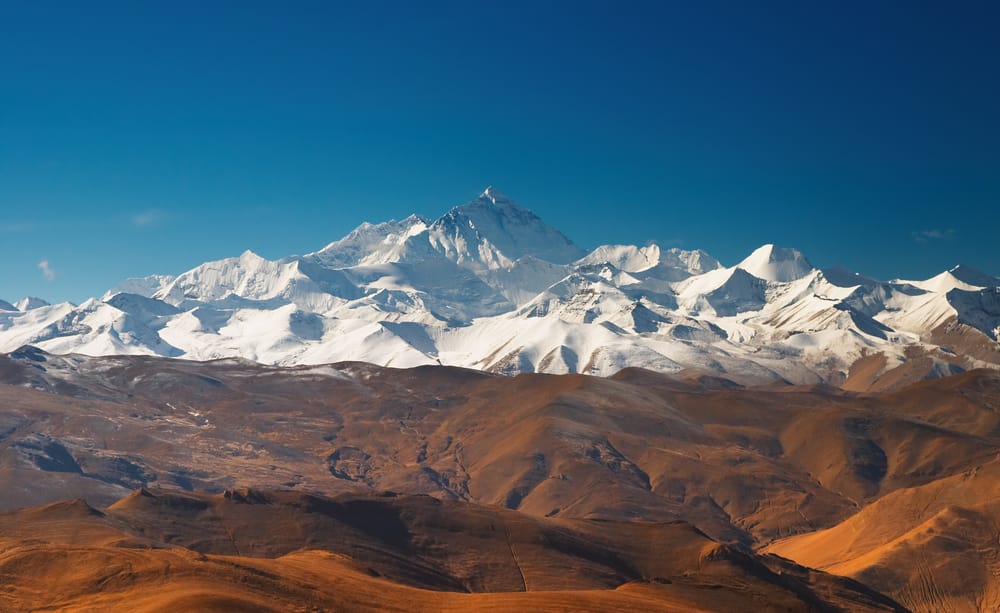 Various religious groups are making a beeline for Mt. Everest to proclaim the message of peace and spirituality from the top of the world. Photo: Pichugin Dmitry

Kathmandu, Nepal
Moses received the Ten Commandments on Mount Sinai, and Jesus  preached his greatest sermon sitting on a mountain. Now the devout from different religious groups are following in their footsteps, making a beeline for the world’s highest mountain to reinforce the message of peace and spirituality from the top of the
world.

Mount Everest, the 8,848-meter peak straddling the border between China and Nepal and first climbed to its summit by Sir Edmund Hillary and Tenzing Norgay Sherpa in 1953, is turning into the world’s highest pulpit. This spring alone, three spiritual expeditions are seeking to reach the top.

Jogabyasa Bhoi is a primary school teacher from Kalahandi, a district in eastern India’s impoverished Orissa state also known as the "Ethiopia of India" because of frequent famines and the high number of starvation deaths. The 32-year-old’s Spiritual Mountain Everest Expedition 2011 aims to spread the message of Sri Aurobindo, an Indian revolutionary who fought against British rule and later became a spiritual leader.

"Aurobindo believed India would have a spiritual regeneration and become the leader of the world," Bhoi told ENInews from his camp at 6,065 meter. "He also said it would be proclaimed from the top of the world."

While Bhoi struggled to raise funds for his ascent, Bhakta Kumar Rai is leading an entourage of 14 people, including a bodyguard. Coming from a remote village in eastern Nepal’s Udaypur district, Rai calls himself "Supreme Master Godangel" and is regarded as divine by followers. The 26-year-old is the founder of Heavenly Path, a sect that emphasizes self-healing and has followers in the United Kingdom, Hong Kong, Brunei, Malaysia and elsewhere.

Followers said Rai will start out for the summit May 17, carrying a flag with quotes from the Bible, Koran and Hindu and Buddhist scriptures. He planned to meditate on the mount for 27 hours, praying for an end to discord.

He’s set himself a tough task. The region above 8,000 meters is darkly mdescribed as the "Death Zone," where breathing is difficult because of the scarcity of oxygen. This month, three people died of high-altitude sickness while pursuing the summit.

Besides the two men, a 36-year-old Nepalese woman from a sect that claims to have over 1,000 centers in 137 countries is climbing the mountain in the name of world peace.

The "Prayer, Meditation and Request for World Peace on the Top of the World" team comprises Sharada Kumari Rayamajhi, a nun from the sect commonly called Brahmakumaris. Originally known as Om Mandala, the order began in 1937 in Sindh, now a province in Pakistan, and shifted to western India’s desert state of Rajasthan in 1950.

"We believe in positive thoughts, harmony, self-discipline and philanthropy for changing the world," said Ram Kumar Ayer, a monk or Brahmakumar at the sect’s Kathmandu office. "It was Rayamajhi’s personal decision to attempt the climb, and she has our best wishes."

The idea of climbing Mount Everest for world peace gained traction especially after 2006, when an American secondhand book dealer, Lance Trumbull, assembled an all-faith team including Christians, Buddhists, a Palestinian Muslim, two Jews from Israel and a Hindu and an atheist.

Already lined up for 2012 are two more spiritual expeditions. Chicago-based survivalist, folk musician and adventurer Rubee Blackriver plans to climb Mount Everest to fulfill the dream of the Rev. Dr. Martin Luther King Jr: "I just want to do God’s will. And He’s allowed me to go up to the mountain."

Costa Rican Immanuel Mendez has announced an expedition by Los Valientes
de David — David’s Braves — to take the word of Jesus to the top of the world.

Nepal’s Catholic Church is not rushing to join the spiritual drive to the summit.

"We do not think it is necessary to climb Mount Everest to pray," said
Anthony Sharma, Nepal’s first Rome-ordained bishop. "However, we will
pray for their success."