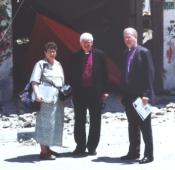 Marion Pardy, Michael Peers and Telmor Sartison stand outside ruins of a bombed building in Gaza.

It is a sad, sad country.

In Gaza and the suburbs of Jerusalem children are dying, victims of bombs and their parents’ war.

Even more obscene than the death of a four-month-old girl by Israeli shelling or the deaths, in retaliation, of two 14-year-old boys by stoning at the hands of Palestinians, is the debate that rages afterwards about who was to blame.

And even more obscene than that, is the posturing that emerges for political profit after the deaths of children.

This is Israel, the Holy Land.

Here, Israelis and Palestinians are locked, in the words of Michael Bell, the Canadian ambassador to Tel Aviv, “in a deadly embrace which neither side can get out of. Each is tied to the myths it has of the other.”

Never, in the 53-year history of Israel, have members of the Palestinian minority been so without hope. Never have they been so angry. With Israeli bombs going off within earshot of downtown Jerusalem, never has a peaceful resolution to the Israeli-Palestinian conflict seemed so impossibly distant.

In a five-day visit to Israel that included tours of some of the hottest spots, a delegation of Canadian church leaders experienced that hopelessness first-hand in meeting after meeting with Palestinian groups. The visit was organized after Canadian church leaders found themselves in disagreement over a statement they drafted in response to the conflict. They decided that before attempting to say any more, as many of them as possible should visit Israel and learn about the situation first-hand.

Amid the daily escalating violence of the second intifada (uprising) in 15 years, the church leaders, including Archbishop Michael Peers, the Canadian Anglican primate, heard predictions of a looming bloodbath that has the potential of turning an appalling situation into something unthinkable.

The delegation also included Marion Pardy, moderator of the United Church, Bishop Telmor Sartison of the Evangelical Lutheran Church in Canada, and Marjorie Ross of the Presbyterian Church.

The group heard the situation likened to Rwanda, to South Africa in its darkest hour and to a second holocaust.

In the process of visiting places and people, the Canadians were exposed to hectoring insults and spit from a Jewish settler in the West Bank city of Hebron, to a fiery Palestinian street demonstration in Gaza, to surveillance by Israeli tanks, and twice they had to flee communities they were about to visit after warnings of imminent Israeli bombardment.

What emerged from tours of West Bank areas and Gaza was a profound sense of anger and an inexpressible hopelessness felt by the Palestinian minority, which, since the second intifada began in September, has been subjected to random attacks by Israelis using artillery, tanks, machineguns and helicopters.

Scores of Palestinians, including many children and young people, have been killed, maimed or injured. The Israeli death toll is much lower.

In the cities, photographs of the youngest, most pathetic victims of shelling, adorn the walls of buildings and become rallying cries for still more protests which breed still more violence.

Of more than a dozen people interviewed during a five-day visit by the Canadians, virtually none expressed any hope for improvement. Many predicted the situation would deteriorate even more.

Many also predicted that if the violence reached Jerusalem, there would be a bloodbath the scale of which can scarcely be imagined. Already, Bethlehem and surrounding communities such as Beit Jala, a stone’s thrown from the Holy City, come under virtually daily shelling by Israelis.

“It means that there is no point to negotiations; and it means that Palestinian people will fight.”

The first intifada in the late 1980s was primarily an economic protest, he noted. This time, the uprising is much more violent and there are many more injuries and deaths on a daily basis. The first, he said, was essentially a call for coexistence and peace. The second is a cry rising from national despair.

“Today the message is that negotiations are hopeless and that Palestinians are determined to fight for their rights.”

The intifada was sparked in September by a visit to Temple Mount, a site holy to Muslims and Jews, by Ariel Sharon, now prime minister of Israel. Under his leadership, the Middle East situation is at its lowest ebb in memory.

But behind that trigger incident is the mushrooming of Israeli settlements in the Occupied Territories, encroaching on the little land that the Palestinians have left, the construction of roads to isolate them even more, the deliberate deforestation of olive trees and fruit groves in the name of security and daily, systemic harassment of Palestinians through travel restrictions and checkpoints that have brought decades of discontent to a seething, violent anger.

“You cannot talk to Israelis anymore,” said Mahmoud Okshiyya, a teacher and Palestinian leader in Gaza.

People who speak for the Palestinians, including Riah Abu Al Assal, the Anglican Bishop of Jerusalem, liken the situation here to the worst days of apartheid in South Africa.

And as with the South African experience, they stress, there is no hope for change, let alone a solution, until the world beyond the Holy Land mobilizes and demands it either through international pressure or sanctions.

Palestinians feel utterly alone, abandoned by the international community to a gradual death by neglect.

Over the complexities of the situation in Israel looms the shadow of the Holocaust, which has, in the eyes of many Palestinians, made the Western world incapable of criticizing Israel for fear that an anti-Israeli stance will be deemed anti-Semitic.

Terry Greenblat, an Israeli Jew who works for the rights of Palestinians, says her fellow Israelis have assaulted her and called her both a mistress of Arafat and a Nazi.

But to allow Israel to hide behind the memory of the Holocaust, she says, would be to set a standard for behavior that is unique to Israel and unacceptable.

“Any position you take,” she says, “puts you in conflict with people. Does that mean you do nothing? The worse position you can take is to do nothing.”

Any resolution to the conflict will take a lot of time, people say, and meanwhile people lose hope, children are blown up, and the violence escalates daily.

“The violence is being imposed on all the people,” said Michel Sabbah, the Latin (Roman Catholic) Patriarch of Jerusalem. “The occupation is violence. The only hope,” he added, “is to wait for another generation of leaders, and that will take many years.

“The only way for Israel to achieve security is through friendship with the Palestinian people. The present leaders do not understand this. They can kill thousands of Palestinians and in the end there will still be a million of them left. The soul of a people that wants to be free cannot be killed.”