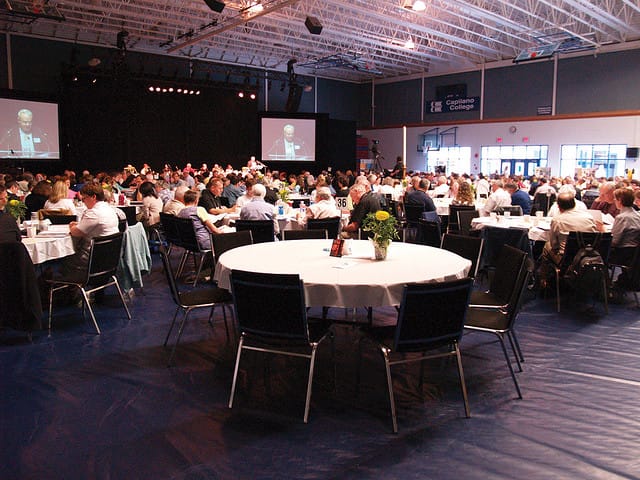 For years now, the New Westminster synod has set aside an empty table for members who have left over the issue of same-sex blessings. Photo: Neale Adams

The diocese of New Westminster has asked the Supreme Court of Canada to end the legal battle over church properties filed by breakaway members of four Anglican churches opposed to the blessing of same-sex unions.

The members, who are part of the Anglican Network in Canada (ANiC), filed an application for leave to the high court on Jan. 14, two months after the British Columbia Court of Appeal upheld a 2009 Supreme Court of B.C. ruling that the diocese should retain possession of the church properties worth $20 million. The courts ruled that the church properties are to be used for worship within the Anglican Church of Canada and under the jurisdiction of the bishop of the diocese.

In a 20-page brief filed with the high court on Feb. 11, the diocese asked the court to decline ANiC’s appeal, citing among other reasons that the previous judgements are “clear and persuasive authority and will put the litigation to rest.”

The diocese also argued that, contrary to ANiC’s opinion, the case “does not present an issue of such national and public importance as to merit the attention of the Court.” The case is “about facts, not legal analysis,” it argued. “…It is not a case that will determine broader issues for religious organizations.”

New Westminster Bishop Michael Ingham reiterated that the diocese’s policy does not compel clergy or parishioners to accept or participate in the blessing of same-sex unions. “No one is required to act against their conscience,” said Bishop Ingham in a statement.

The diocese said the case, initiated in 2008, has dragged on far too long and has come at the expense of its ministry “for its people and those in need.”

The diocese also said that, since prior agreements that allowed disaffected clergy to stay in the church buildings have now expired and the high court has yet to decide on the appeal, counsel for both parties need to appear before the trial court to seek its direction “if agreement on use of the buildings cannot be reached.”

Cheryl Chang, special counsel to ANiC, had said earlier that awarding the properties to ANiC congregations “would mean that the original purpose of Anglican ministry would continue to be fulfilled in those church properties.”