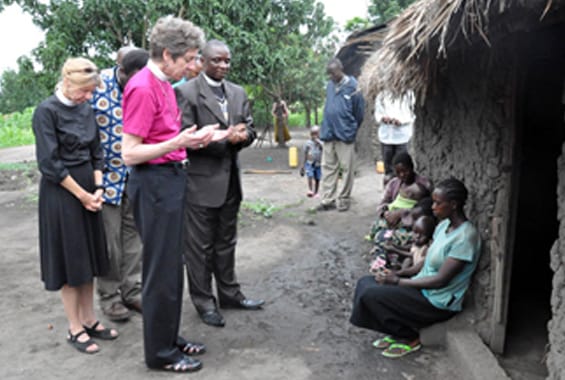 Thousands of women brutally raped by marauding militiamen in the Democratic Republic of the Congo are marred by stigma, frequently abandoned by their families and communities.

At a church guest house in the center of Goma, in the Anglican Diocese of Bukavu, the Rev. Desire Mukanirwa and his wife, Claudaline, provide a safe haven for victims of gender-based violence to work through their trauma and carve out a new life. The end goal is the women’s integration back into society.

Shouldering immense psychological issues, some of the women become pregnant or find themselves infected with HIV as a result of sexual violation.

"We’re helping to heal the wounds of trauma," said Mukanirwa over breakfast one July morning at his Goma home. "We didn’t want to shut our eyes. We need action."
Ordained a priest in the Province L’Eglise Anglicane du Congo (Anglican Church of Congo) in 1998, the same year the guest house opened, Mukanirwa told a chilling story about children, one as young as 3, being raped during the Second Congo War (1998−2003).   When women raped by the militia are abandoned and find solace in the Anglican church, Claudaline said, "we pray with them, we joke with them and speak to them in love about how they can be integrated in society." Claudaline heads a nongovernmental organization that offers trauma counseling, combats adult illiteracy, trains women in professional and domestic skills, and feeds and cares for a growing population of malnourished orphans made parentless through rebel violence or disease or abandoned as rape victims.

It’s a ministry replicated throughout Congo’s Anglican dioceses at the same time some other churches in Africa’s second-largest nation turn their backs on victims of sexual violence.

A mainline Protestant church recently received training in women’s rights from Heal Africa, a hospital and community development center in Goma. Center Director and Anglican Lyn Lusi received a letter from the church thanking the organization for the training but noting that some adult leaders strongly opposed the teaching that girls younger than 18 should not marry and that the church shouldn’t reject victims of sexual violation.

"Can you believe it?" she asked. "The church that should be helping them and comforting them is throwing them out because they have been raped." Similarly, Lusi said, some churches force widows, who are considered outcasts in many Congolese communities, to face the wall during worship.

Lusi’s stories were among many disturbing accounts about the Congolese’s ongoing plight that Presiding Bishop Katharine Jefferts Schori and an Episcopal Church delegation heard during a six-day visit to the dioceses of Bukavu, North Kivu and Boga in late July.

The group learned that the day before they visited Beni, located some 190 miles north of Goma in the North Kivu diocese, a girl had been sexually attacked and killed in the village and that rebels had kidnapped a director of a local hospital a few weeks earlier.

"People are dying every day. The government does nothing. They cannot protect us. It’s terrible," said the Rev. Albert Atoko-Ntungo, archdeacon for the province, speaking in French as the Rev. Margaret Rose, the Episcopal Church’s associate director of mission for program, interpreted.

Rose and Jefferts Schori were joined by the Rev. Petero Sabune, the Episcopal Church’s Africa partnerships officer, for the visit, an opportunity for the two churches to deepen relationships and develop new partnerships.

"We have come here to learn from you and to go back and tell your story so that we can be stronger together," Sabune told Bishop Adolph Isesoma in his Diocese of North Kivu office in Butembo. "We are brothers and sisters in Christ," Jefferts Schori said, "and we are glad to be able to stand together."

At a July 24 Eucharist service at All Saints Church in Bunia, Jefferts Schori preached in French, sharing her impressions of the Anglican Church of Congo, while Bishop William Bahemuka of Boga translated the sermon into Swahili.

"I see remarkable resilience, hope, the ability to celebrate the presence of God in the face of life’s tragedy. That is the kingdom of heaven, my friends, surprising as it is," Jefferts Schori said.

-The above is an abridged version of a longer article accessible at www.episcopalchurch.org/ens/