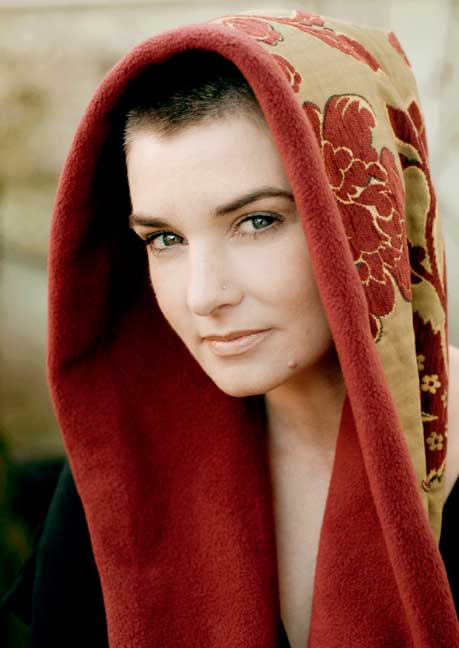 When I heard that the pop musician Sinead O’Connor had released an album called Theology, it took me right back to my university days, when I used to comb through the lyrics of my rock records, searching for signs that at least a few of these artists – whose music formed the soundtrack for my coming of age – might actually share a belief in the God of my own Christian faith. In O’Connor, did we have a new Christian artist on our hands, one who could stand beside U2’s Bono as a public and outspoken person of faith? I’m apparently not alone in this thought, either. The project has won detailed reviews and long interviews with high profile Christian media like Christianity Today, beliefnet.com, and even the Salvation Army’s War Cry.

Anyone paying attention to pop music in the early ’90s will remember O’Connor’s single, Nothing Compares 2 U, from her highly successful album I Do Not Want What I Haven’t Got. That album drew freely and creatively from the language of the Christian tradition, reflecting O’Connor’s upbringing as an Irish Roman Catholic, but also hinting at her fiercely personal spiritual search. In 1992, she caused a stir when, during an appearance on TV’s Saturday Night Live, she dramatically tore in half a photo of John Paul II, calling him “the real enemy.” Since then, she has explored womanist spiritualities, was ordained as Mother Bernadette Marie in a break-away catholic group, immersed herself in Rastafarianism, and most recently pursued studies at a Catholic college in Dublin. To call her a complex figure is an understatement.

[pullquote]The two-CD Theology is made up of 12 songs, most written or co-written by O’Connor, and all but two offered in both acoustic and instrumental versions. All of the original songs are based on readings from the Hebrew scriptures, and most remain remarkably true to the biblical texts. If You Had a Vineyard (Isaiah 5), 33 (Psalm 33), and Whomsoever Dwells (Psalm 91) are notable in this regard, as are Dark I am Yet Lovely (Song of Solomon) and Watcher of Men (Job), each of which manage to capture admirably the spirit of an entire biblical book in just four or five stanzas.

It is on the two songs on which she works most freely from the texts – Something Beautiful, which draws on Jeremiah, and Out of the Depths, which is based on Psalm 130 – in the latter one really hears O’Connor’s personal theology bubbling through to the surface. In different ways, both songs wrestle with a picture of God who weeps for a people more taken up with religion and ecclesial ideology than with faith and a true openness to the divine; a people who, in the name of God, can justify war and violence. “Theology,” O’Connor said, “is an attempt to create a place of peace in a time of war.” While her vision of a peaceable world is by no means entirely foreign to Christian thought and belief, her “theology” does not fit entirely within the mainstream of the Christian theological tradition. “I believe that God, Jesus, and the Holy Spirit and that whole kind of thing is one particular energy,” she said in one interview. “That energy is the same no matter where you are in the world or whose side you’re on. If you call it Allah or you call it God or you call it Buddha, it’s all the same.”

There is a long and important tradition of poets and mystics and writers who speak from the periphery of the church, often bringing insights and uncovering truths which we’ve left buried. For all of the oddness of much of his vision, William Blake certainly played that role, while in our own time John Irving, in his magnificent A Prayer for Owen Meany, and Reynolds Price, in just about everything he has published in the past 30 years, have had so very much to say to the church. While not a poet of the stature of Blake, O’Connor, with Theology, has located herself in that line. In fact, while the recordings themselves are often unremarkable, even a bit bland, her poetic and lyrical work does deserve the attention of people more squarely within the church.

Even for poets, though, theology does not happen in a vacuum. Price, for instance, while defining himself as an “outlaw” Christian, is both deeply immersed in the literature of the tradition and engaged in ongoing dialogue with Duke University colleagues such as Stanley Hauerwas. While O’Connor may well have carried out some studies at the college level, on the whole it would seem that her engagement has been almost solely with the biblical texts. That in itself is not necessarily a bad thing, but it does render her vision narrow, even thin, and limits the degree to which she can sustain any conversation with the living theological tradition.

Maybe that glimmer of my youthful excitement over a pop musician being willing to write about God is not such a bad thing, in that it got me thinking again of how important it is for the church to attend to the work of the poets and the singers of our own time. It also got me thinking about our need to create space for the artistic and poetic vocation within our church, and to see if perhaps the work of theological inquiry isn’t best carried out in a searching and imaginative dialogue with the poetic imagination. And maybe such a church would be one that would feel as if it had enough space to accommodate, or even shape, the Sinead O’Connors of this world.

Rev. Jamie Howison is a priest in Winnipeg and director of st. benedict’s table, a “community with a slightly unconventional take on the conventions of Anglicanism.”