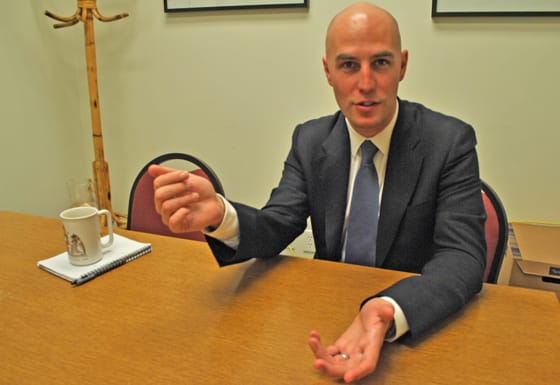 The new-ish director of communications for the Anglican Communion Office is working diligently to share the good news.

Part of this involves helping Anglicans and Episcopalians realize that they need to learn to tell their own stories better.

Importantly, says Jan Butter, who was appointed in March 2010, they need to stop letting others, namely secular journalists, tell their stories. Stories of transformation don’t make headlines, he points out.

“The role of the journalist is to sell newspapers, to sell advertising and you do that by picking the most scandalous and controversial headline,” Butter told the Anglican Journal in a recent interview.

By allowing others to tell the stories, “I think the reputation of the church, the reputation of the Gospel, to a certain extent, has been tarnished,” says Butter. “I genuinely believe it’s down to us, not just communication professionals, but as Anglicans and Episcopalians, to tell our own story and to tell it better.”

The really good news? “There are exciting, dynamic, hopeful stories out there that are going on at parish, diocesan and provincial level,” says Butter.

Prior to his appointment in the Anglican Communion Office, Butter was in charge of global advocacy communications for the international office of World Vision. He has also served in the organization’s United Nations liaison office in New York, as well as at its offices in Sri Lanka and the U.K. In addition, he has worked as a journal in secular media, including the Western Mail in Cardiff, Wales. Butter is also a director of the World Association for Christian Communication.

One of the first items on the communications agenda was securing funding for a three-year pilot project to hire a communications officer “from Africa, for Africa,” says Butter. “The idea is to support those provinces that currently have weak communications capacity.”

Initially, the communications officer will work with provinces in eastern Africa helping people to write and share their own stories. Effective communications is about having a person in place who is “dedicated to sharing the story of a particular church or a diocese,” he says. “We’re really hoping that the provinces in Africa will want to chip in and maintain that role.”

In his travels across the Communion, Butter is hearing that people want to tell their story, want to share the exciting things that are happening at all levels of church life. “That really encourages me,” he says.

Butter plans to strengthen the Anglican Communion News Service so that it can become the central hub for news about Anglicans worldwide. “Part of the strategy is to create a website that will become a central place for the news service, almost like the BBC site…To do that we need a set of correspondents around the world,” he says.

Harnessing social media is also a priority. “Social media is neither good nor bad, it is a tool,” says Butter. “People with an axe to grind, those who have a particular agenda, have understood (its) power and opportunity much better than the rest of us.”

Nonetheless, Anglicans-particularly those in Africa and the U.K.-are catching on to the power of social media, says Butter. “…Traditional parish boundaries, in terms of those who access the Internet, are becoming less and less relevant,” he says. He cited the case of an Anglican he met in Guyana, who managed, through conversations on Facebook, to prevent two people from committing suicide. In England, he says there are bishops who use blogs to engage Anglicans and non-Anglicans alike. “One bishop said to me, ‘I can speak to 200 people on a Sunday morning with my service, but I have several thousand people following my blog…'”

Aside from wanting to share stories, there is a yearning among Anglicans and Episcopalians to connect, says Butter. When he assumed office, Butter conducted an informal survey to “get a feel” for what they thought of the Communion. It surprised him that 80 per cent of the comments were either neutral or positive, and that 97 per cent said, “they would like a way to connect” with Anglicans worldwide.

This finding was bolstered by the results of a Facebook page Butter set up to show solidarity for Anglicans in Zimbabwe who were being threatened by allies of an excommunicated bishop.

“The (thought) I had was, as an English Anglican, I’m shocked, appalled and outraged and I want to do something about it…I bet there are some who would want to do something about this, too,” he says. Within three days, 600 people signified support by clicking the “Like” button on the page; it now has about 1,300 supporters. People were also writing messages such as, “We’re praying for you, we understand what you’re going through.” And, Zimbabwe Anglicans were writing back, “Thanks so much, it really means a lot knowing you’re out there for us…”