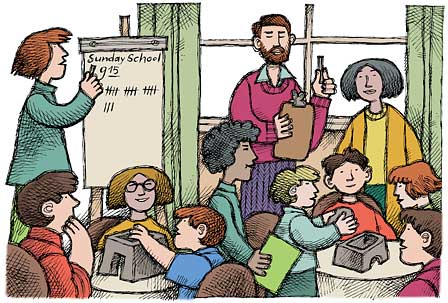 “At that time, Caesar Augustus ordered a census to be taken throughout the Roman Empire … Everyone, then, went to register himself, each to his own home town.” Luke 2: 1-3

How many Anglicans are there in Canada? How many Anglican priests? How many baptisms took place in Anglican churches in Canada last year? How many funerals?
Finding the answers to these questions has become increasingly difficult in recent years since the national church’s statistics-gathering function has slowed significantly.
The 2007 Anglican Church Directory, an annual reference book published by ABC Publishing, in the section that normally carries national statistics, now carries a sentence that reads: “Figures will be available in 2008 after the installation of a new statistics-gathering system.” However, the same sentence, with the date reading “2007,” appeared in the 2006 directory. The church last published statistics in the 2005 directory and those were from 2001.
“I get comments from people: ‘Why don’t we have statistics?'” acknowledged General Synod treasurer Peter Blachford, whose financial management and development department is responsible for collecting the data.
Karen Evans, one of two librarians at the church’s national office in Toronto, said the library gets several inquiries each month about church numbers from journalists, students, directory publishers, other churches, members of the general public and national church staff who need accurate figures for such things as grant applications.
“People are not impressed” that the most-recent data she can provide is from 2001, she said in an interview. “People sound contemptuous, or puzzled and critical. We look like an organization that is not transparent, not self-discerning and aware. Up-to-date statistics would allow the church to better plan for the future and respond to the present. Would you deal with a bank that could only tell you how much money you had in 2001?” she commented.
However, Ms. Evans also pointed out, gathering statistics is a lot of work at smaller, multi-point parishes that may have little secretarial help.
Statistics Canada, a federal government department, publishes a certain amount of information about religious denominations as part of the decennial census, but it is not as detailed as a particular church’s data and often numbers vary. For instance, the 2001 national census reported that about two million Canadians identified themselves as Anglican, but the Anglican Church of Canada’s 2001 figures show that there are 212,577 people identified as regular givers out of a total of 641,845 people on parish rolls.
In previous years, the financial management department sent out paper questionnaires to the 30 dioceses, which were then responsible for contacting their parishes for such information as number of children in Sunday school and number of marriages.
Compliance has been spotty as some financially-troubled dioceses have trimmed staff, said Mr. Blachford. “What you had was that it was one more thing they had to do and as their staff got smaller, this fell by the wayside,” he said.
The financial department is responsible for collating the results of the questionnaires, but Mr. Blachford said he believes the church needs to examine why it collects data. “Everyone feels it’s important, but we have to be sure they are the right statistics. We’ve got to look at why we collect statistics and make sure they are meaningful,” he said.
The department has received a $15,000 grant from the Anglican Foundation to develop an electronic data-gathering system and the diocese of Montreal’s executive officer, Mark Gibson is a consultant on the project. “Mark is talking to (diocesan) finance officers and asking them what stats are important to them,” said Mr. Blachford.
He said he is also talking to officials in New York at the national office of the Episcopal Church about the design of its statistics-gathering system; he plans to travel there to observe it. Installing another computer server at the Toronto office to handle the system “isn’t a big issue,” he said. “Designing the system is. If we can get assistance from the Episcopal Church concerning the basic platform, that would be a big help,” he said.
Canada’s largest Protestant denomination, the United Church of Canada, meanwhile, maintains an impressive, up-to-date directory of detailed statistics, but its collection system differs from the Anglican church.
The national office in Toronto sends its questionnaire directly to the church’s 2,300 “pastoral charges,” or parishes that may include one large church or several smaller churches. The response rate is impressive – 92 per cent – and Tom Broadhurst, information and statistics co-ordinator, and his two-person staff call parishes that have not responded. “It’s not the most enjoyable task (for the parishes), but there is a strong sense of duty,” he noted. Last year, he and his staff contacted more than 400 churches to verify their data. One function of the data is to calculate the amounts each presbytery (regional grouping) contributes to the national conference budget.
Paper questionnaires are sent in December and the church’s Web site also posts the forms for downloading and e-mailing back to the national office; Mr. Broadhurst estimated that only about 15 churches use the electronic function.
The United Church has considered data-gathering to be an important function since its beginning in 1925, when four denominations merged. “If you are going to look at trends, it’s valuable to have accurate numbers to base policy on. Is a trend real or imagined? The best way to know for sure is to have the hard data,” said Mr. Broadhurst.