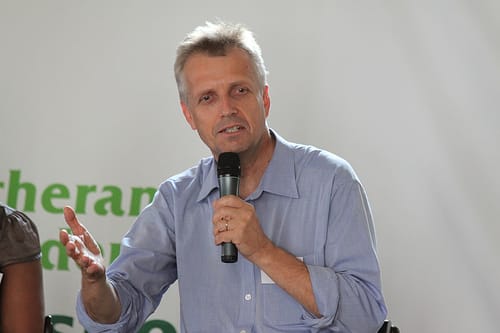 The Rev. Martin Junge, who will become the new general secretary of the Lutheran World Federation on Nov. 1. Photo:LWF/JELC/F. Hubner

When the Rev. Martin Junge becomes the first Latin American to head the Lutheran World Federation on Nov. 1, the issue of economic justice and illegitimate debt is likely to feature high on his agenda.

Junge, a Chilean born in 1961, takes office as general secretary of the Geneva-based LWF upon the retirement of the Rev. Ishmael Noko, a Zimbabwean theologian, who is leaving after 16 years in the post.

On July 26, Junge spoke to the highest governing body of the LWF, its assembly, which has been meeting in Stuttgart, Germany, from July 20 to 27.

"There is an economic order that is absolutely unfair, unjust and a deep expression of sin, depriving millions of human beings from their rights and even their lives," Junge told delegates at the assembly, which takes place every six or seven years.

"Did you know that the G20 [grouping of countries] spent US$816 billion to bail out its banks?" he asked. "All of a sudden, the money was there, overnight, to save banks."

Junge said he wondered why money was never available to provide sufficient anti-retroviral drugs to fight HIV and AIDS, or to cancel debts, "of clearly illegal or illegitimate origin."

He continued, "Isn’t this a moral question, which a communion like the LWF, with its global structure, should be raising, hopefully together with other denominations, religions and organizations?"

Junge was one of the people who worked on the 2008 publication, "Not just numbers – Explaining the legitimacy of foreign debt", which was presented to the October 2008 International Symposium of Illegitimate Debt, in Oslo, Norway.

Junge pointed out to the assembly that the global North’s continuing commercial dealings with the South offset the cost of current development aid. He said, "Did you know that in the year 2006, the global South transferred US$657 billion to the North? This means that after summing up all financial flows – commercial, loans, gifts – the global North had a surplus of US$657 billion?"

Junge also noted that in 2009, regarded as one of the best years for development aid, only US$123 billion was offered to countries needing such support.

He said, "Shouldn’t the LWF take an active role in this discussion as well, raising its prophetic voice on behalf of those people, who are not an abstract number but an important part of its 70 million members?"

Junge said it was when he was 12 years old, at the time of his confirmation in the early years of the Chilean dictatorship, that he thought he should enter the Christian ministry.

He told assembly delegates that those years in his home country had made him realise that it is easy to lose democracy but difficult to get it back.

"As with many people in my country of my own generation, I was profoundly shaped by the period of great political difficulties. We suffered the loss of democracy and freedoms, and lived under the rule of military dictatorship," said Junge.

In 1973, General Augusto Pinochet seized power in Chile in a bloody coup. He remained as the Latin American country’s ruler until 1990, when he stepped down after losing a national referendum on whether he could continue as president until 1997.

"During that period of time, I learned how little it takes to lose democracy, and how much it takes to regain it," said Junge. He added that he had also learned the, "tremendous value of participatory democracy".

The new LWF general secretary comes from the Evangelical Lutheran Church in Chile, of which he was president from 1996 to 2000. It is one of the smallest of the LWF’s 145 member churches.

After schooling in Chile, Junge studied theology at Germany’s Georg-August University in Gottingen. He also holds an advanced studies diploma in the management of not-for-profit organizations from Switzerland’s University of Fribourg.