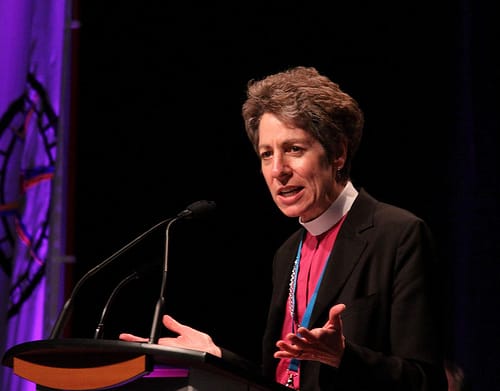 The Standing Committee of the Anglican Communion adjourned its July 23-27 meeting here with its members celebrating a renewed focus on mission and greater commitment to transparency.

"I feel like we’ve grown closer as a body and we’re living more deeply into our charge to be the trustees for the various offices and programs of the Anglican Communion," Bishop Ian Douglas of Connecticut, who serves on the Standing Committee as an elected representative of the Anglican Consultative Council, the communion’s main policy-making body, told ENS following the meeting.

Douglas said the committee, through the support of the Anglican Communion Office, "has pursued a course of transparency and open communication, which I think is vitally important if trust and understanding across the communion is to be engendered. We cannot minimize what a significant move that is in the right direction for our health as a communion."

The Anglican Communion Office’s communications department, under the directorship of Jan Butter, has issued two daily bulletins during the meeting and more are expected. This is the first time the committee’s proceedings have been communicated in this way.

"I actually believe that our functioning continues to improve," Presiding Bishop Katharine Jefferts Schori told ENS. "The new commitment to transparency is already making a significant difference. Members are generally willing to speak clearly about their positions and beliefs."

Throughout the five days of closed sessions, the 14 committee members heard about efforts to improve communication across the Anglican Communion’s officially sanctioned networks. With its networks, the ACC recognizes groups of Anglicans who want to organize formally around a ministry or issue and monitors their efforts.

The committee also heard about the progress towards establishing an alliance intended to develop a more coordinated and collaborative approach to relief, development and advocacy work in the Anglican Communion.

Through the alliance, Douglas said, "there is great hope and possibility for more effective and united service on behalf of the poor and marginalized of the world."

Douglas celebrated efforts to integrate initiatives and ministries at the Anglican Communion Office that focus on evangelism and church growth. "Not only does it demonstrate the wholeness of God’s mission, it also gives it a greater visibility," he said. "I think that’s a very significant move."

The committee also heard reports on the Bible and the Life of the Church project, which is exploring how Anglicans of different contexts read the Bible, and ongoing work in theological education throughout the Anglican Communion. "They were much more than reports, they actually invited us to consider our own biblical interpretation from our own contexts," Douglas said. "We actually were participating in the work."

Jefferts Schori said "it is clear that very important work is being facilitated out of the Anglican Communion Office. We are beginning to pay far more attention to our mutual participation in God’s mission."

Archbishop of Canterbury Rowan Williams proposed in his May 28 letter that representatives currently serving on some of the Anglican Communion’s ecumenical dialogues should resign their membership if they are from a province that has not complied with moratoria on same-gender blessings, cross-border interventions and the ordination of gay and lesbian people to the episcopate.

On June 7, the Rev. Canon Kenneth Kearon, secretary general of the Anglican Communion, wrote to the Episcopal Church members on those dialogues informing them that their memberships had been discontinued.

The Standing Committee discussed whether some of its members whose churches had not complied with the moratoria should absent themselves from participation in certain discussions, Douglas said.

"There was a sense that we didn’t want to participate in the diminishing of our voices any further and we realized that it was not within our authority to make decisions about who can and cannot participate in which discussion," Douglas said, noting that it was the responsibility of the ACC and the Primates Meeting, which elected the committee members, to respond to such questions.

Earlier in the meeting, a proposal made by South East Asia member Dato Stanley Isaacs to separate the Episcopal Church from the rest of the Anglican Communion was not supported by the committee, which agreed such action "would inhibit dialogue and … would therefore be unhelpful."

The Standing Committee membership has changed in recent months following several resignations and appointments since its last meeting in December 2009.

Most recently, Diocese of Iran Bishop Azad Marshall, Archbishop Henry Orombi of Uganda and his elected alternate, Archbishop Justice Akrofi of West Africa, tendered their resignations from the committee. Orombi was elected in February 2007 by his fellow primates to represent Africa on the Standing Committee but he did not attend any of its meetings.

Bishop Paul Sarker, moderator of the Church of Bangladesh and bishop of Dhaka, joined the July meeting as the elected alternate for Middle East President Bishop Mouneer Anis, who resigned his membership in February saying that his presence has "no value whatsoever" and that his voice is "like a useless cry in the wilderness."

"We felt as a group that we were less whole, less representative of the church catholic in all of its many perspectives by the loss of those who have chosen to resign," Douglas said. "While it wasn’t always easy for me as a person from the Episcopal Church to hear our brothers’ concerns and observations about our life, the fact that they weren’t at the meeting diminished us."

The committee agreed that its response to those who’d resigned "would express regret that their voices would be missed and that the committee’s work was diminished when it lacked a range of opinion as well as full representation."

The Rev. Canon Janet Trisk of South Africa was elected at the last Standing Committee meeting in December 2009 to replace Nomfundo Walaza, also from South Africa. Trisk was formally welcomed as a member to the July meeting.

"I don’t know if I will be returning to this group or not," said Jefferts Schori, who was elected by her fellow primates from the Americas in February 2007 to represent them on the Standing Committee, "but I must say that it has been a privilege to serve the communion in this way."

The committee confirmed that the next meeting of the Consultative Council will be held at Holy Trinity Cathedral in Auckland, New Zealand. The meeting is due to be held in 2012, but no dates have been announced.

Overall, Douglas said, the meeting was "much more focused on mission and living into the fullness and comprehensiveness of God’s mission."

The Standing Committee usually meets annually but has met biannually for the past three years. It oversees the day-to-day operations of the Anglican Communion Office and the programs and ministries of the four instruments of communion — the archbishop of Canterbury, the ACC, the Primates Meeting, and the Lambeth Conference of bishops.

The current members of the Standing Committee are:

— Matthew Davies is editor and international correspondent of the Episcopal News Service.