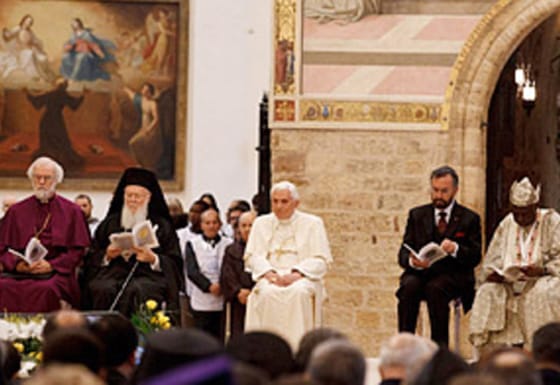 Archbishop Rowan Williams joined Pope Benedict XVI at a day of reflection, dialogue and prayer for peace in Assisi on Oct 27.

The event commemorates the 25th anniversary of the historic World Day of Prayer for Peace meeting in 1986, called by Pope John Paul II, which brought representatives of both Christian communities and other traditional world religions together and was attended by Archbishop Robert Runcie.

Representatives of Christian communities and other principal religious traditions were joined by figures from the worlds of culture and science, according to a press release on the archbishop’s website.

The day, which takes as its theme Pilgrims of Truth, Pilgrims of Peace, began in the Basilica of Santa Maria degli Angeli, where the Archbishop delivered an address as one of the day’s 10 Testimonies for Peace.

In his address, the Archbishop spoke of the first Day of Prayer for Peace in 1986, describing John Paul II as somebody who “believed passionately that the concerns of human beings in our age for justice and stability were matters that demanded a common witness from people of faith, without any compromise of our own particular convictions and traditions.

Dr. Williams called on all people of faith to “embody…mutual recognition in true and lasting relationships of friendship’: “The challenges of our time are such that no one religious body can claim to have all the practical resources needed to confront them, even if we believe that we have all we need in the spiritual or doctrinal realm.”

He added that “All people of faith have in common the conviction that we are not ultimately strangers to each other. And if we are not strangers, we must sooner or later find a way to embody that mutual recognition in true and lasting relationships of friendship. We are here today to declare our will-or rather our passionate determination-to persuade our world that human beings do not have to be strangers, and that recognition is as possible as it is necessary because of our universal relation to God.

The archbishop also quoted the opening verses of “What Is Man,” a poem by Welsh poet Waldo Williams.

He concluded by saying that “We are here today to declare our will-or rather our passionate determination-to persuade our world that human beings do not have to be strangers, and that recognition is as possible as it is necessary because of our universal relation to God.”

The day ended with a solemn renewal of the joint commitment to peace.