Home » Young at home with sisterhood

Young at home with sisterhood 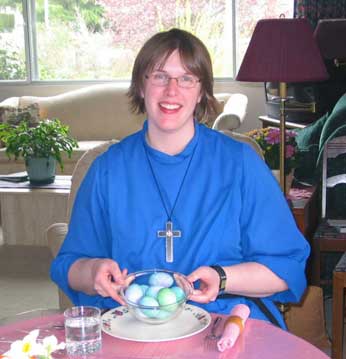 Sister Amy Hamilton, who is in her second year of a three-year profession with the Sisters of St. John the Divine, finds her work with the religious community more satisfying than her past secular work.

Sister Amy Hamilton is turning 30 this year and experiencing the same angst as any other 20-something nearing that milestone. The only difference is that Sister Amy, who is a nun with the Sisterhood of St. John the Divine, an Anglican religious community with a convent in North York, has more than 30 other women to reassure her that everything will be fine.

“It’s funny, because I am living with these women and 30 to them is very young,” she says. “And it’s kind of a milestone for me, and they are making their milestones of 50 and 60 and 70. It’s good, because they are saying: ‘Amy, you are still young!'”

Speaking to Sister Amy, one senses a deep contentment with the unconventional life path she has chosen, though for years she resisted the pull of her vocation. “When I was in Grade 9, I saw a movie called Brides of Christ,” she recalls. “It was about a Catholic sisterhood that was going through Vatican II. And even though they were going through some really rough changes, there was still that underlying myth of community. I felt very attracted to that.” Her priest in Stirling, Ont., Rev. Bob Wright, an associate of the Sisterhood of St. John the Divine, assured her that there were Anglican sisters and the idea stayed in the back of her mind.

She went on to study culinary management at college and stayed in the industry for several years. During that time, she visited the convent for a quiet day. “I thought I would check it out,” she says. “And there was no spark. I didn’t feel anything. And I thought: ‘Oh, good. I’m safe.'”

She worked in technical support for a computer company, but satisfaction was eluding her. “I was struggling. I knew that there must be something out there for me for a fit. All the choices that I had made were fine, but they didn’t fulfill that deeper longing.”

She was considering whether to go back to school when the sisterhood beckoned again. She saw an advertisement for a discernment program at the convent called “Women at a Crossroads.” She decided this was another chance to check out the sisterhood without making a commitment.

“At that time, the discernment program was a month,” she says. “It was just amazing, the way the sisters’ whole life was centred around the different offices and eucharist. You didn’t have to struggle to make time to go to church; it was embedded in the timetable. And the community and the way they interacted with each other – I just kind of fell in love with it. And then I left, because I thought I’m too young. One of the mentors I had, Sister Brenda, gave me a little exercise where you did pros and cons for coming in and pros and cons for staying in a secular life, and for me there were too many cons for the sisterhood and too many pros for staying out.”

But she found she couldn’t stay away. She returned in January of 2003, and this time, she stayed for good. Since then, her daily life has followed a regular rhythm that many outsiders might find stifling, but which she says has given her immense opportunity for growth.

“I just did my first sermon,” she says. “It was such a shock that my ideas were actually appreciated and were something that people wanted to hear and that I could actually pull together a reflection on a Scripture. The thought of that, just five years ago, had never even entered my mind. Being able to formulate what my spirituality is or what God means to me – I don’t think I would have had the words to do that. Living in community and the opportunities I’ve been given have stretched me and pulled me and given me the words to be able to formulate what I’m feeling and what I’m thinking.”

Every morning, the sisters wake up in time to attend to what they call their spiritual duties. “It’s three types of prayer: lectio [slow contemplative praying of the Scriptures or other texts], meditation and spiritual reading,” says Sister Amy. “In our rule, it says we are supposed to do two hours of spiritual duties. So it’s an hour of meditation, half an hour of spiritual reading, and half an hour of lectio. Most sisters try to do the two hours in the morning, because it really sets your day.”

The rest of the day is a balance of worship, work, recreation and community time. “Last year I was working in our guest house,” says Sister Amy. “I was also doing the receipting for fundraising and the layout for our newsletter. Everybody’s job is different; some of us have two or three jobs.” She is now at the sisterhood’s branch house in British Columbia for a year, an assignment that is part of her process of formation. “I’m the cook, and I’ve also done preaching and quiet days,” she says; she is also working with youth in the diocese.

She has found her community’s approach to work infinitely more satisfying than her experiences in the secular world. “You move where the community needs you,” she says. “It’s quite different from the place where I worked before, where you are very possessive of the work that you do and if you are moved up into management, you are that position. That’s not how we see each other. We’re foremost the person that we are. I’m Amy -I’m not Amy in Victoria who does the cooking … It was amazing to be loved because of who I am, not because of what I can bring to the community. It’s very affirming to me.”

Sister Amy has completed her novitiate and is now in her second year of a three-year process called first profession. “After that, the community and I decide whether it’s appropriate for me to move forward to life profession,” she explains. “You have to write a letter and explain what your wishes are and then the sisters vote. It’s an election into life profession.”

In the meantime, Sister Amy says: “It’s just such an amazing feeling to actually find the thing that fit, that something more. This was it. To be able to find that I did have a purpose and to be able to say ‘Yes, I love my work and I’m happy where I am,’ was just amazing.”

Henrieta Paukov is communications co-ordinator with the diocese of Toronto.