Williams will meet with U.S. bishops 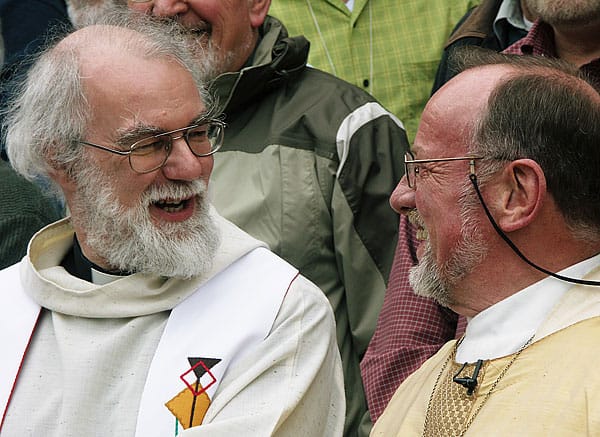 Archbishop of Canterbury Rowan Williams (left), seen above with Canadian primate Archbishop Andrew Hutchison, responded to an urgent call for a meeting from bishops in the United States. He will meet with them in September at their regular fall meeting in New Orleans.

Ending weeks of speculation and criticism, Archbishop of Canterbury Rowan Williams said he will meet with bishops in the United States to discuss tensions in the worldwide Anglican church caused by differences over homosexuality.

He also declared that he considered cancelling the 2008 Lambeth Conference of the world’s Anglican bishops due to the sexuality debates roiling the church, but decided against it. (See related story)

Speaking at a news conference at the Anglican Church of Canada’s national office in Toronto on April 16, Archbishop Williams said he will attend the regularly-scheduled fall meeting of house of bishops of the Episcopal Church. It is set to take place in New Orleans, Sept. 20-25. The visit comes after the U.S. bishops’ meeting in March, at which they rejected demands placed on them by the primates (senior bishops) a month earlier; they instead issued an urgent call for a consultation with Archbishop Williams.

“Whatever has been said in the press, there’s never been any suggestion I should decline that invitation. These are difficult days because I think the (global Anglican) Communion in recent years has had to face the fact that the division on certain subjects, especially human sexuality, has been getting much more deep and bitter and threatens to divide us,” he said.

He said he hoped that the meeting would result in better understanding on the part of the American church as to what the primates, or national bishops, are attempting to communicate.

In February, a meeting of the primates of the Anglican Communion’s 38 provinces called upon the U.S. church to cease blessing ceremonies for gay couples and not to consecrate additional gay candidates to the episcopate. (The election of Gene Robinson, an openly gay man, as bishop of New Hampshire caused an uproar in the Communion.) The communique from the meeting gave the U.S. church until Sept. 30 to comply, but did not spell out consequences. The primates also developed a “pastoral scheme” that would establish a pastoral council and a primatial vicar whom the Episcopal Church’s Presiding Bishop (primate) would name to provide alternative oversight of dioceses – seven of the Episcopal Church’s 111 – that disagree with their church’s more-liberal stance on homosexuality.

The pastoral scheme was rejected at the March house of bishops meeting in Navasota, Tex., as being “injurious to the polity of the Episcopal Church,” which reserves such decisions for the triennial governing General Convention. The bishops called on Archbishop Williams to meet with them; there was considerable criticism in recent weeks when it seemed that he did not intend to respond.

At the Toronto news conference, Archbishop Williams said he intends to go to the September conference with several members of the standing committee of the primates’ meeting and members of the Anglican Consultative Council, an internationally representative group. He said he also hoped to understand, from the meeting, the problems the primates’ request is causing for the American church, under its constitution. “I’m still waiting to see what the Episcopal Church will come up with as an alternative. The reaction was a very strongly worded protest against what they see as interference, but if not that, then what? I’ve spoken privately to people in the United States and am waiting to see,” he said.

[pullquote]As leader of churches affiliated with the Church of England, Archbishop Williams said that his aim “is to try and keep people around the table as long as possible, to understand one another and to encourage local churches on this side of the Atlantic and elsewhere to ask what they might need to do to keep in that conversation, to keep around the table.”

In addition to fielding questions at a news conference and touring the Canadian church’s national office, Archbishop Williams spent a day at the regularly-scheduled spring meeting of the Canadian house of bishops in Niagara Falls, Ont., leading a day of retreat (see related story, this page). He was asked what the consequences might be if the Canadian church’s governing convention, General Synod, decides at its June meeting to allow dioceses the so-called “local option” of deciding whether to bless same-sex unions and to explore changing the marriage canon (church law) to admit gay couples.

“I won’t speculate on outcomes, but I don’t think it takes rocket science to work out that (a positive decision) will pose some problems,” he said. Anglican churches in other areas of world, particularly in the southern hemisphere, are vehemently against liberalizing attitudes toward homosexuality, believing it contrary to Scripture.

Canada’s General Synod must make its own decisions, but “I hope whatever decision is made will be made out of a resolution to maintain the highest degree of communion possible across the Anglican world, and not just to say that is an unfortunate casualty,” he said. He would like to see, he said, “some awareness of what level of consensus is needed for a church to go forward with a sense that a decision is owned not just by a slender majority but by a solid, defensible body of prayerful opinion.” A resolution prepared for the meeting calls for a vote of 60 per cent to approve same-sex blessings.

He added that he hoped that members of General Synod would ask the question, “What is for the health of the body of Christ, both locally and globally?” Blessings touch upon such questions as the doctrine of marriage, he said. “Is there more than one form of covenanted sexual union that is sacramental of God’s grace? The second question is, what about the authority of Scripture? I think there is more than one way of answering that, but that is clearly one of the questions,” he said.

It’s not, he said, “just about nice people who want to include gay and lesbian Christians and nasty people who don’t. It is a question on which there is real principled disagreement. What are the forms of behaviour the church has the freedom to bless, and be faithful to Scripture, tradition and reason? That is the question that is tearing us apart at the moment because there are real differences of conviction.”

A split in the Anglican Communion would be terrible, he said. “I believe passionately that we need each other in the Anglican Communion. A communion divided into a liberal segment and a conservative segment would be very, very much impoverished on both sides and to the degree that it would isolate the churches of the developed world from some of the more vulnerable churches of the global south,” he said.

To those who believe the church is very slow about making these kinds of decisions, Archbishop Williams said that he doesn’t mind “a slower process of decision-making that is fully owned.”