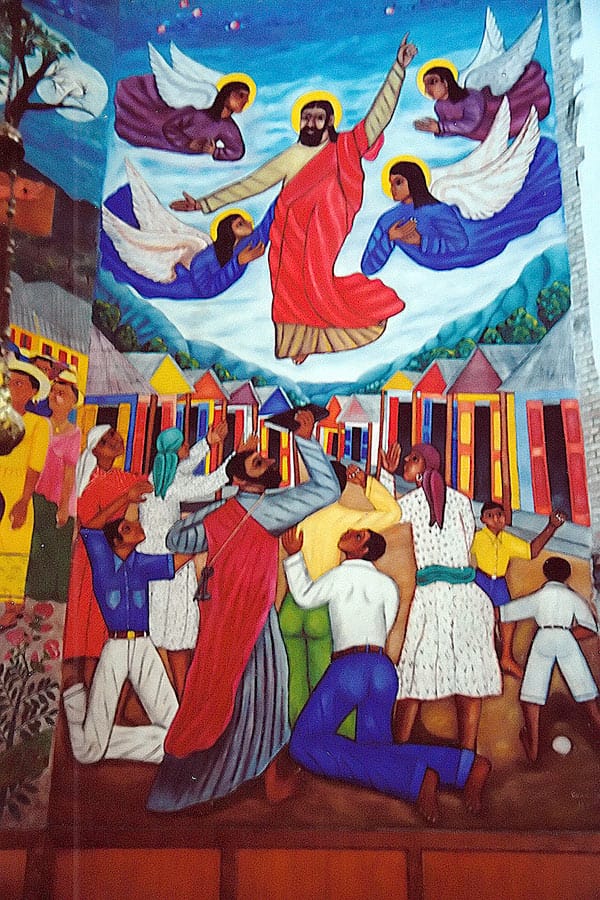 Journalists who covered the devastating earthquake in Haiti have written that among the saddest scenes they witnessed was the destruction of places where Haitians prayed and sought solace.

That included the Episcopal diocese of Haiti’s Cathedrale Sainte Trinite, in Port-au-Prince. The church was reduced to dust and rubble in one fell swoop. Destroyed along with it were vibrant murals, all painted in the 1950s by some of Haiti’s old masters. The murals, which illustrated the story of the Bible, now resemble “an unfinished jigsaw puzzle,” according to The New York Times.

The loss of the murals, along with countless other touchstones of Haitian art and culture, cannot compare to the loss of lives-nearly 200,000. But they are no less overwhelming because of what they meant to Haitians, said art experts. Haiti’s thriving and proud cultural landscape helped many Haitians endure hardscrabble lives and numerous assaults on their dignity. Yes, Haiti may be the poorest nation in the Western hemisphere. But its art instilled national pride and reminded Haitians that they were the world’s first black-led republic. And when their people revolted against French colonial rule in the early 19th century, they became the first independent Caribbean state.

That pride was evident in the murals, which rendered the story of the Bible-from the temptation of Adam and Eve to the crucifixion of Jesus-using all black figures. The giants of Haitian art, most of them no longer alive, each contributed their genius to the murals. The crucifixion scene on the apse was by Philome Obin, one of the founding fathers of modern Haitian art. The nativity scene was by Rigaud Benoit, one of the most highly-prized Haitian artists. The other masters who each depicted a biblical scene were Castera Bazile, Prefete Dufaud, Gabriel Leveque, Adam Leontus, Toussaint Auguste and Wilson Bigaud.

The murals were painted in 1950 and 1951 under the direction of Dewitt Peters and Selden Rodman, two American art critics who were tireless promoters of Haitian art.

Also smashed by the earthquake was the Cathedral’s Rieger pipe organ, said to be the largest in the Caribbean.