Home » What would happen if we say ‘no’ to Communion Covenant?

What would happen if we say ‘no’ to Communion Covenant? 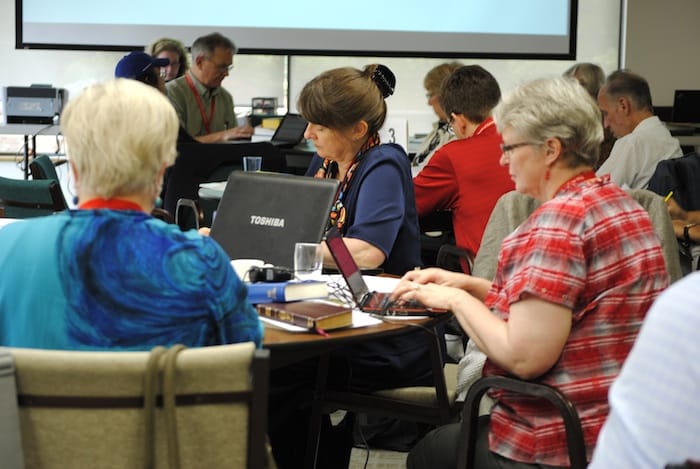 CoGS members consider key messages about the proposed Covenant that will be prepared for the Anglican Consultative Council meeting this fall. Photo: Marites N. Sison

Mississauga, Ont.-The Anglican Church of Canada needs more clarity around what the “relational consequences” would be for not adopting the proposed Anglican Communion Covenant.

This is one of the key messages that Council of General Synod (CoGS) members said the church must convey when the 15th Anglican Consultative Council (ACC) meets in New Zealand Oct. 27-Nov. 7.

All member provinces of the Communion have been asked to report on progress made in response to the covenant, which has been recommended as a way of healing divisions triggered by debates over the issue of sexuality.

Emerging from small group discussions, some CoGs members said there’s a lot of uncertainty around what happens when a province decides to adopt or not adopt the covenant. Critics of the covenant have long warned that adopting it could result in a two-tier Communion.

Although a comprehensive study guide on the covenant was prepared and recommended for Canadian Anglicans, “there’s not much interest in discussing it,” reported members of one CoGS discussion group. “We’re not sure why,” they added.

The House of Bishops would like to include a message that the church wants to continue being engaged in the life of the Communion, regardless of whether or not there’s a covenant. There are a variety of ways to do this, noted Hiltz, including companion relationships with overseas dioceses and taking part in the continuing indaba (purposeful dialogue) process.

The covenant has been rejected by The Episcopal Church in the Philippines, and in the Church of England, more than half of the dioceses have voted against it; the proposal cannot be reconsidered until a new Synod is elected in 2015.

In addition, there “huge challenges” for adoption of the covenant in the Anglican Province of New Zealand, Aoteaora and Polynesia, said the report. The Tikanga Maori have rejected the covenant and although it will still come before the province’s General Synod in July, adoption requires a majority vote.

The Episcopal Church in the U.S. will consider the covenant at its General Convention this July. The Anglican Church of Canada will decide whether to adopt or reject it at General Synod 2013.