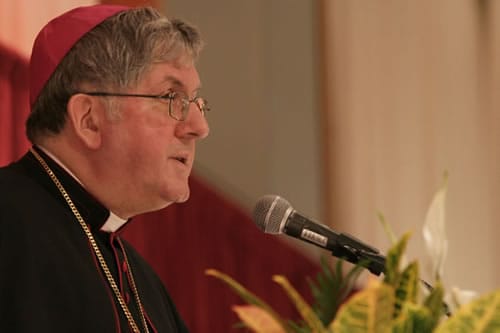 The Most Rev. Thomas Collins, Roman Catholic archbishop of Toronto. Photo: Courtesy of the Archdiocese of Toronto

The Most Rev. Thomas Collins, Roman Catholic archbishop of Toronto, will be elevated in February to the College of Cardinals, an international body of principal advisors to the pontiff that selects the successor to a pope who has died.

“I am deeply honoured that the Holy Father has called me to be a member of the College of Cardinals. I am grateful for the trust he has placed in me, and recognize this honour as a sign of his esteem for the role of Canada and of the archdiocese of Toronto in the universal Church,” said Archbishop Collins, who will continue to serve in Toronto.

Born and raised in Guelph, Ont., Collins was ordained a priest in 1973. In 1997, Pope John Paul II named him bishop of St. Paul, Alta., and archbishop of Edmonton in 1999. Pope Benedict appointed him 10th archbishop of Toronto in Dec. 2006.

The formal consistory, at which this year’s new cardinals will be created, will take place in Rome, Feb. 18-19. Cardinal designate Collins will become the 16th cardinal to come from the ranks of the Roman Catholic Church in Canada and the fourth to emerge from the archdiocese of Toronto.