Sustainable development starts with a cow 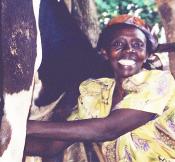 Nakibuuka beams as she relieves a cow of her milk.

It is sustainable development in its simplest form, an African take on the ?give a man a fish? parable. In this case, give a family a cow and their whole lot will improve.

The family must first demonstrate that it can provide for the cow; they build a hut to house the cow and its calf and they must also plant a creeping plant called lablab and elephant grass to cultivate for the cow?s feed. Elephant grass improves the cow?s milk production.

The family then has a cow that provides milk, with a surplus that can be sold. Nothing goes to waste: dung is used as fertilizer and urine serves as an insecticide for the family?s crops, which can include potato, banana, coffee, cassava and avocado.

Apart from the obvious financial benefits of the project, James Mutayitwako says some of the most satisfying results can be seen in the families? health because of the improved nutrition.

?You see these families before they get the cows and then, even three months later, even their bodies are changing,? said Mr. Mutayitwako, a staff member in the church?s diocese of Namirembe.

Many families name their cow after the wife?s mother. It is a compliment: the cow provides milk, just like a mother, says another PDR staffer, John Baptist-Ddungu.

The project ? which has been running for two years in this area about a half hour west of Kampala ? does not end with the donation of the cow (which is pregnant when it goes to the family.) The agreement between the church and the family stipulates that the cow?s first female calf be donated back to the program at the age of one, hence the program?s sustainability. If the first offspring is a male, the family may keep it or sell it. Subsequent calves are the family?s to keep.

Kakande (surnames are not used by many Ugandans) and his wife Jane proudly show off their cow Rebecca and her calf, Tendo (Bugandan for miracle).

Kakande says through an interpreter that while in the beginning his six children were not interested in Rebecca?s upkeep, they began to help out when they recognized the financial benefits the cow brought. Now the income helps pay for the children?s school fees.

The cow provides about nine litres of milk a day; the family uses about three litres and sells the rest.

Kakande says he has noticed a great improvement in his vanilla and vegetable crops since he introduced the natural fertilizer. He also sells some of his surplus crops, earning his family an income of about 5,000 Ugandan shillings a week.

Further down the road, another family awaits the birth of their cow?s second calf. Tyaba and Nalongo (whose name is not her given name, but rather, a title meaning she has had twins) have had their cow for nearly two years. The first calf was male; the cow will calf again before the end of the year. So far, with the proceeds from the eight litres of milk they sell daily, they have built an addition to their house and bought some dishes and a wheelbarrow. They have also paid school fees for their children, three of whom are in technical schools. Fifteen people live in their home.

Also nearby, Nakibuuka, a single woman raising five children (two her own and three orphaned grandchildren), has bought pigs and is building a larger house for her family with proceeds of her sales of milk. The children help, fetching water for the cow and brushing flies away from the animal while Nakibuuka milks her. Mr. Mutayitwako says families are chosen for the project based on their needs. Nakibuuka heard about the project at church.

She says the children love the cow ?because they can share the milk.?

?She gets very tired,? with the work of keeping up the farm, says

Jessica Nalwoga, a church worker. ?But at the end of the day, she says

it?s good to have milk for her tea.?