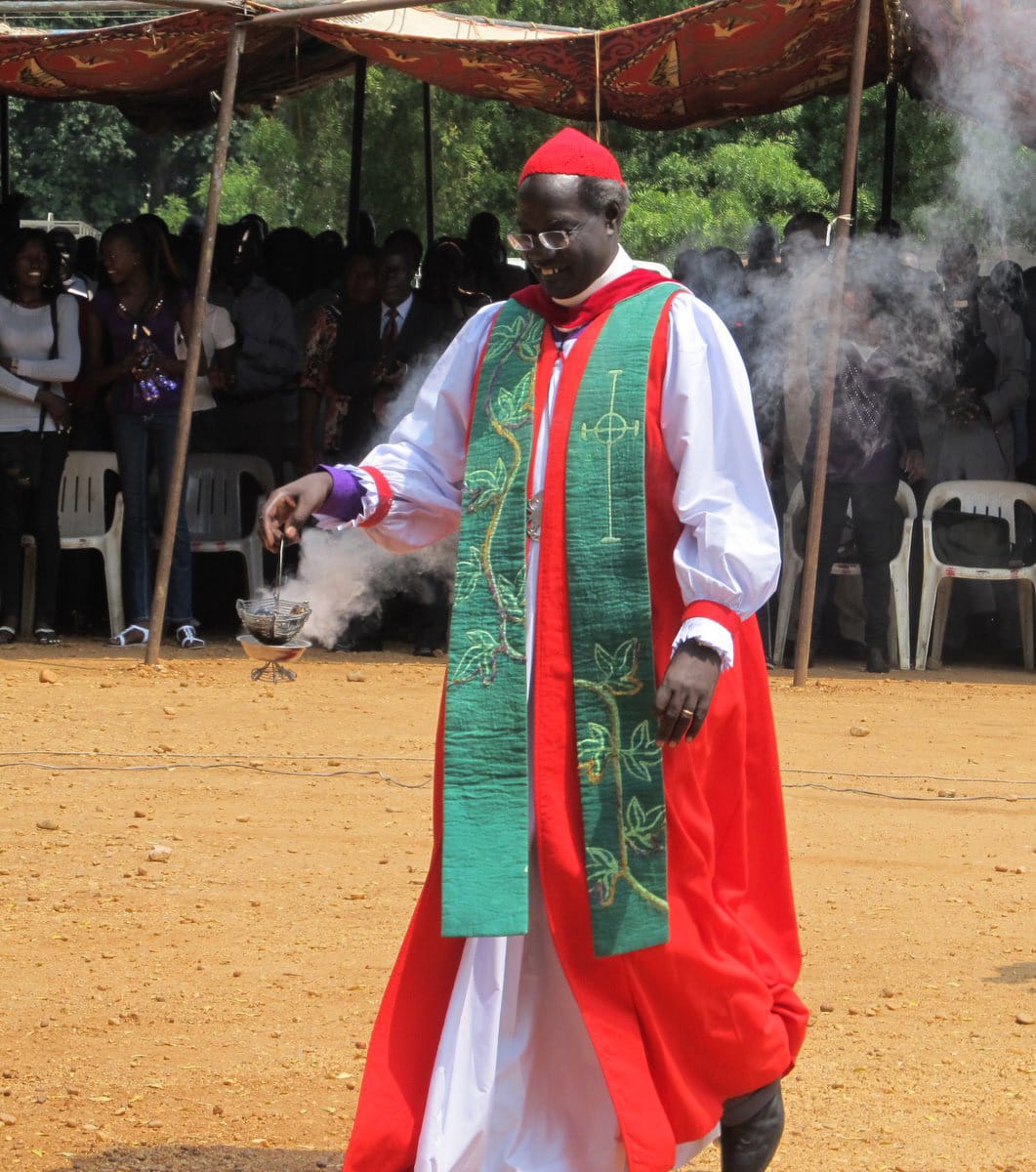 In an exuberant and joyous three-and-a-half hour service here July 10, South Sudanese Episcopalians celebrated the birth of their new nation, even as they looked towards the difficult future of their country.

All Saints Cathedral in Juba —  the capital of the new Republic of South Sudan — was full more than half an hour before the service began and an overflow crowd watched on television screens set up in the church yard.

Church leaders were realistic about the size of the challenges facing South Sudan, officially recognized as the world’s newest nation on July 9. South Sudan has a history of inter-tribal violence that has continued in the run-up to independence.

In his sermon, Archbishop Daniel Deng Bul of the Episcopal Church of Sudan noted how South Sudan President Salva Kiir had reiterated his amnesty offer in his July 9 inaugural address. "The message of God is peace and unity among all peoples," said Deng. "Corruption and tribalism has become a crisis in our nation." In a message to Kiir, Deng said, "We are ready to work with you so there is no need for our people to suffer again. The Episcopal Church of Sudan is ready at any time to work for reconciliation. We have to bring everybody in."

South Sudan is at the bottom of the world’s development tables, with pervasive poverty and disease. A young girl has a greater chance of dying in childbirth than graduating from secondary school. Many southerners rely on international food aid. Deng noted the scale of the challenge. "Our people have been taught to receive food from their time in the refugee camps. We have a culture of dependency." Pointing to the church’s extensive agricultural education programs, Deng said, "To build a new nation, let us learn to produce our own food. Our country is rich in resources but we need to work to realize the potential."

Suffragan Bishop Graham Kings of the Church of England’s Diocese of Salisbury sent text message updates from the July 9 independence ceremonies that were read at the church’s General Synod meeting in York. During the July 10 cathedral service, Kings read a letter from Archbishop of Canterbury Rowan Williams that noted the ongoing violence in Abyei, South Kordofan, and other border regions of Sudan and pledged that the Church of England "will continue to pray for a peaceful future and for the church’s work towards a just and secure future for South Sudan." Kings was visibly moved by the celebratory atmosphere and proclaimed that the independence celebrations was "one of the best days of my whole life."

The Rev. Canon Petero Sabune, Africa partnerships officer for the Episcopal Church, represented Presiding Bishop Katharine Jefferts Schori during the weekend’s celebrations. Sabune noted how Jefferts Schori has called for a season of prayer for Sudan and pledged the U.S.-based Episcopal Church’s continued prayer and support for the new nation and its church. "For us, the first line of defense is prayer," he said. "We will continue to be with you in this coming period."

The service also featured speeches from some of the government ministers, members of parliament, tribal elders, and revolution leaders in attendance, many of whom are members of the cathedral congregation on a regular basis. All reiterated their desire for a stable future for South Sudan rooted in a Biblical vision of peace and justice.

Despite the cautious words about the future, the celebratory atmosphere of the service was unmistakable, especially during the two singings of South Sudan’s new national anthem. Using incense donated by a Muslim friend, Deng censed the congregation — both those inside and those outside the cathedral — to symbolize the birth of the new nation while many women ululated in joy. After two decades-long civil wars that made millions of refugees, Deng rejoiced in what this moment represented. "We have come home. We have come home to stay. We are not going anywhere."

— Jesse Zink is a student at Berkeley Divinity School at Yale. His reporting from South Sudan is sponsored in part by the Seminary Consultation on Mission and the Evangelical Education Society of the Episcopal Church.