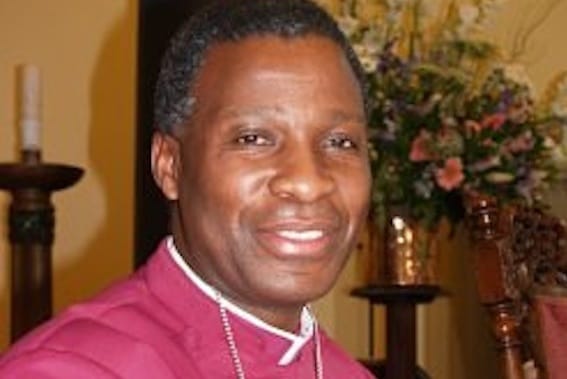 The Most Rev. Thabo Makgoba
Photo: Courtesy of Anglican Church of Southern Africa

The Most Rev. Thabo Makgoba, Archbishop of Capetown and Metropolitan of the Anglican Church of Southern Africa is an accidental Anglican.

“My father was a lukewarm first-generation Christian who attended the local Zion Church, and my mother went to whatever church her friends went to,” he says candidly, on a recent visit to Church House in Toronto. “The only good schools were Anglican or Catholic. The closest one was Anglican, so I went there and was baptized an Anglican,” he says with a chuckle.

Elegant, quiet-spoken and quick to laugh, the archbishop took some professional detours on his way to the primacy, to which he was elected in December 2007 at age 48, succeeding Archbishop Njongonkulu Ndungane. He is South Africa’s youngest-ever primate.

Earlier he completed a master’s degree in psychology and practised in the educational setting as a counsellor to children with learning disabilities and their parents, later working with spinal-cord-injured mine workers.

The tools he acquired, through his education and job experience, stand him in good stead in his current role, he says. Understanding one’s fellow humans is paramount, as is the ability to draw people out, to see beneath the facade and capitalize on group dynamics. “Whether primate or parish priest,” says Archbishop Makgoba, “one deals with God’s people, their complex natures, their joys and sadness, and how the abundant life that Christ talks about plays out for them in the everyday.”

And in the almost since 20 years since the 1994 free elections that signalled the official end of apartheid, the church has continued to play a similar role in drilling beneath the surface to the very core of South African society. “The church has done what it does best–what it did even during apartheid–and that is to get into the vein of what makes society tick,” he says. “We were able to fight apartheid because we knew where the rubber hit the road and what really pained the people.”

Though the era of heroic front-page church leaders is past, the church is still able to get into the bones and muscles and sinews of the new democracy and monitor where it is heading. “There has been noticeable progress, yes, but there are still big lags,” he says, pointing to education, health and gender-based violence. “The church has to continue to be vocal. If we are all created in God’s image, no one should be thus demeaned.”

Makgoba believes that the South African church has a unique place in the Anglican Communion. What sets it apart is its recent history of suffering. Paradoxically, though apartheid was intolerable, it did bring the people closer to the Gospel’s concept of suffering. “The Gospel has a preferential option for the poor and the suffering,” he says. “That is something we will cherish and we should not lose sight of it.”

For a South African primate, political involvement is perhaps a matter of course. “But not in a partisan political role,” he says. “I assume the tools of justice that go back to Christ are saying ‘I have come that they might have life, and that they might have it more abundantly.’ And I encourage my parishioners to seek that every day.”

He is also a lover of the venerable liturgy and sacramental rites of the Anglican church–“I was brought up high church and at my core I am still high church,” he says. But for him, realizing the Marks of Mission in loving service is most important. In that commitment the archbishop takes as words to live by Matthew 25:36: I was naked, and ye clothed me: I was sick, and ye visited me: I was in prison, and ye came unto me. “Those words speak very deeply to me,” he says.

The South African church has recently adopted a new mission statement based on three principles: anchored in Jesus Christ, committed to God’s mission and transformed by the Holy Spirit. It has identified young people as a priority and also leadership as critical in the days ahead. “Good leadership requires good theological awareness and education, financial stability and people with skills and good health,” the archbishop says. Recently, reflection and prayer have been added to the agenda. “In life after apartheid we all tend to do and do,” he says. “We need to remember that we are grounded in Scripture and that prayer should undergird every action.”

As for the 85-million-member Anglican Communion, the archbishop is looking forward to the meeting of the Anglican Consultative Council in New Zealand this spring. “This always brings an interesting dynamic with it, with different people trying to position themselves-and that is healthy,” he says. He will be bringing the issues of climate change and stewardship to the top of the agenda.

As for the Anglican Covenant, which will also grace the council’s agenda, he does not think it will be as divisive an issue as some think. “Many people have a lot of energy for mission, a lot of energy for partnership and for other contextual things that make the Communion a communion.” His province has already adopted the covenant, and will go before the next provincial synod in three years’ time for final acceptance. He believes that people will be far more concerned with the Communion’s new focus on Bible studies as the part of the Marks of Mission.

As in many countries, religious life in South Africa is becoming increasingly ecumenical, with interfaith prayer and worship a common occurrence. One interesting new development on the ecclesiastical landscape is the coming together, with government help, of the many once-scattered African indigenous churches, which are Christian bodies that incorporate elements such as polygamy. “The government sees potential voters there, and our president is a polygamist,” he says wryly.

As deputy chair of the country’s interfaith National Religious Leaders’ Forum, Makgoba is active in an initiative called Walks of Witness, in which interreligious representatives visit sites to highlight specific social ills caused by big business exploitation or government neglect. “Our current focus is water and sanitation and how these create more illness in a country that can ill afford more sick children,” he says. “We are critical of business and government, but at the same time we are supportive of their efforts for the people.”

At the heart of the archbishop’s mission is emulating the earthly life of the second entity of the Trinity, the incarnate Christ, who was so touched by the poor and disadvantaged. “We must take that vocation seriously,” he says. “The church cannot afford to be aloof or it risks irrelevant.”