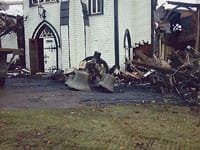 Anglican congregations across Canada will be called upon to make collection plates a little heavier to help offset skyrocketing church insurance rates that have spiked premiums in some dioceses by more than double and added to a range of financial demands.

And while most dioceses can probably absorb the budget shortfalls caused by the rate hikes, church financial advisors say, others will have to find ways to trim their insurance costs.

“We never had a parish last year that didn’t make its financial commitments – it was a great year, but next year? I have to admit that I am worried about what’s going to happen with this increase,” says Rev. David Torraville, financial officer with the diocese of Central Newfoundland, which has 32 mostly-rural parishes. “We’re going to have a really close look at whether we can afford it and keep our commitments. We have commitments to our national church, our theological college, to the Primate’s World Relief Development Fund, the residential schools fund, and all sorts of different commitments.”

The three dioceses in Newfoundland and Labrador have seen their coverage for churches, rectories and parish halls rise to about $600,000 this year from about $340,000 last year. But those rates pale in comparison to rates in the diocese of Nova Scotia and Prince Edward Island, where premiums are reported to have soared 250 per cent, among the highest in the country – in part, because of the fire that leveled the 247-year-old wooden St. John’s Church in Lunenburg, N.S., last Halloween. The rates do not even take into account the damages dealt Nova Scotia by September’s Hurricane Juan.

Rates are also up overall in Quebec , Ontario and the Prairies. And the diocese of New Westminster , in British Columbia , has seen its insurance bill jump to just over $400,000 this year from about $240,000 last year. Insurance companies attribute the high rates to many factors, including the Sept. 11 terrorist attacks which hit the global insurance industry with a $40-billion loss. Damage claims that many denominations have incurred in abuse lawsuits have also been cited as a cause. And the distance from church buildings to the fire station and building materials used in the churches always has a bearing on the calculations.

But Matthew Cook of Aon Reed Stenhouse, a Toronto brokerage firm that handles the insurance of a large number of Anglican dioceses in Ontario , says churches are not being singled out. “There is not a huge bias between western Canada , eastern Canada or central Canada ,” said Mr. Cook. “Individual churches and individual dioceses are being treated according to their loss ratios more than anything else, whether those losses arise from storm or fire. If you keep going to an insurance company asking for large claims to be paid, they’re going to increase payments.”

“To try and figure out an average or mean increase (for the country) is almost self-defeating. Various church (insurance) programs that are out there, some of them are obligatory – they have different rate increases than programs that are optional,” he said.

Some churches have actually seen reductions, said Mr. Cook, “not because the insurance as such has got cheaper, but because they’ve looked at the way they’ve bought insurance in the past and found a better structure.”

Mr. Cook says all major denominations buy their insurance en masse or by the diocese. Ecclesiastical Insurance Group is the largest insurer of Anglican church property nationally. But Mr. Cook says the cost of abuse insurance is not so much the driving factor because churches can hardly even get it these days.

Mike Wellwood, financial manager for the Diocese of New Westminster, says, “We’re much better off than many dioceses – there’s a real advantage to being an urban-based church because of the availability of emergency services.”

“In the downtown section (of our diocese) the big churches like the cathedral and others are stone and masonry and are much less a risk, unlike some very old wooden ones which, of course, one spark and they’re gone.”

Mr. Wellwood says churches have no choice but to pay the prices, since all insurance companies are offering similar rates. But he says he believes the new rates, which came out last spring, are in line with the overall insurance rate hikes across the country and beyond. “It’s like the hydro bill in many jurisdictions,” he said.

Mr. Torraville says Central Newfoundland was hit with a double whammy this year when, for the first time, the insurer insisted that all buildings be appraised for coverage at market value.

“The truth is we have not been great insurance risks,” says Mr. Torraville, listing a fire in St. John’s a few years ago and an expensive oil spill last year at another church. “One of the things that I try to do here is to encourage churches to inspect oil tanks and keep on top of maintenance.”

Fred Evans, the financial officer who administers the insurance program for the three Newfoundland dioceses, says some dwindling rural congregations that have churches that are too expensive to operate because of the overall cost increases for electricity and maintenance, as well as for insurance, may have to face closing their churches and attending services in neighbouring towns.

Will Hilliard is a writer in St. John’s.