Sense of community developing in Fredericton 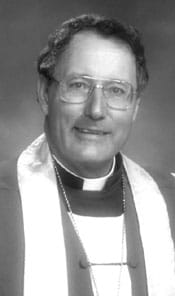 `It was a bit upsetting to hear that the No. 1 issue in the diocese was lack of trust … We had to get away from being lone rangers and share our ministry with each other and the laity.’

BISHOP GEORGE Lemmon, the seventh bishop of Fredericton, has spent the past 10 years helping to build a sense of community and forge bonds of trust throughout the more than 187 congregations that make up the New Brunswick diocese.

“The very first bishop of the diocese had a vision of having each church in the diocese no more than a buggy ride apart,” explained Bishop Lemmon. “So, initially, the churches were about six miles apart.”

But, as the diocese grew, the churches became more sparsely spread out. In some cases, churches can be separated by more than 100 kilometres. By the time he arrived in 1989, Bishop Lemmon discovered most of the 90-plus clergy in the diocese felt disconnected from their colleagues and from the church hierarchy. In fact, it was the key issue they identified as a challenge to their work in the church.

“We’ve spent a lot of my time as bishop trying to develop a sense of community,” he said. “For the past six years, we’ve had a Monday morning meeting of the clergy. This is used as a time of prayer and reflection on the upcoming Sunday’s lectionary. This not only helps build a stronger sense of community, it also helps fertilize the mind with new thoughts and ideas.”

Those early meetings with the clergy also served to set up the notion of shared ministry in the diocese, said Bishop Lemmon, who explained he wanted to lead the diocese with not only a sense of shared management, but also a sense of common purpose.

“It was a bit upsetting to hear that the No. 1 issue in the diocese was lack of trust,” he recalled. “It’s not the kind of thing you want to hear in a community of faith. We had to get away from being lone rangers and share our ministry with each other and the laity.”

This sharing has given rise to the strong sense of lay ministry in the diocese.

“There is a strong lay ministry focus,” said Bishop Lemmon. “The laity are assisting in the services, yes, but it goes beyond Sundays. We are looking at what we do in the community as ministry and making sure the church is a significant part of the community.”

It is vital to do this, he added, because in many parts of rural New Brunswick, the churches are among the only remaining community-based institutions.

“In most cases, the post office is gone, so is the train station. Even the general stores are gone,” he said. “And, with them, go the places people can meet their friends and neighbours. It is up to the churches to take the places of these things. It is part of our ministry to provide a food bank, or a soup kitchen, or a community kitchen, in addition to maintaining our same high standards for Sunday worship.”

In order to do all this, Bishop Lemmon found it necessary to subdivide the diocese into six deaneries and have archdeacons become “the eyes and ears of the bishop.”

In this way, he said, it is easier to provide support to the clergy and people – and further encourage the development of strong clergy partnerships – and to encourage creative solutions to problems like declining church attendance and stretched-to-the-limit church budgets.

During his tenure, a rural life commission has also been set up to determine how to make more effective use of church resources in rural areas. In one four-point parish, the congregations have elected to rotate the Sunday services through each of the four churches and have a fellowship meal after each service.

“The largest of the churches recently had to build a new church,” said Bishop Lemmon. “And, they got some help from the other churches. They also built a larger meeting space with the shared dinners in mind.”

Amalgamation of churches has also been an option for some communities, so there are a number of double parishes in the diocese. In one case, a suburban church and a rural one joined forces to help rebuild a church and church hall, saving about $40,000 in the process because there were a number of tradespeople in both churches willing to donate their skills. Later, the group did the same pooling of resources to renovate the rectory.

Bishop Lemmon observed that in the diocese of Fredricton, the will to think creatively about how to make the church work better comes from a deep-seated faith.

“The church is still very important to the people here,” he said. “It is part of who they are.”

For this reason, programs aimed at faith development, such as Alpha, Cursillo and Day of Enrichment, are tremendously well supported throughout the diocese. A new program, called Emmaus, a kind of Alpha follow-up program, has begun in three or four parishes in St. John, Moncton and Fredericton.

“I believe we are called to not only make Christ’s disciples, we are also called to teach them and train them,” said Bishop Lemmon. “But first and foremost, we have to trust each other. Jesus built the first community of Christians based on trust. He called them to follow him, and they had to trust him enough to leave their homes without having a clue where they were going.

“On that first Easter, they must have been feeling fearful – maybe they might be next – but they gathered together for that shared meal and that is where they drew their power.

“We draw our power from each other in the same way. The challenge is to build the trust it takes to make Jesus the lord of our lives. Our thoughts need to be expressed, they need to be offered in openness to God and then we need to listen and wait on Him.”

Bishop Lemmon will leave his office in April 2000 and Bishop William Hockin will become the diocese’s eighth bishop. Bishop Lemmon and his wife, Lois, are planning to retire to their new home in Fredericton.

“The most rewarding thing about this job has been seeing what God can do with parishes with people,” he said. “I saw a lot of God working in people’s lives. It was also a great blessing to think of 10,000 people praying for me every Sunday.”

It has been, he added, a walk of faith.

“I never wanted this job,” Bishop Lemmon said. “But I am glad I was entrusted with it. Working with these priests and these people has been a wonderful experience.”

Nancy Devine is a freelance writer and editor living in Aurora, Ont.