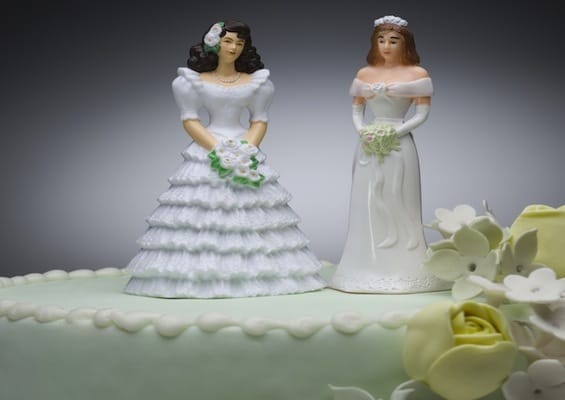 The Scottish government has indicated religious groups will have freedom of choice in deciding whether to officiate at gay weddings. Photo: Shutterstock

Edinburgh, Scotland – The Scottish government has begun a 14-week public consultation, running from Sept. 2 to 9 Dec. 9, on the question of legalizing marriage for gay couples, encouraging individuals and groups such as religious organizations to take part.

Catholic church leaders have already begun to criticize the idea. Cardinal Keith O’Brien, in a homily given in early September at St. Patrick’s Church, Edinburgh, said "the view of the Church is clear. No government can re-write human nature: the family and marriage existed before the state and are built on the union between a man and a woman."

Nicola Sturgeon, Scotland’s Deputy First Minister, said the government "[tends] towards the view that religious ceremonies for civil partnerships should no longer be prohibited and that same sex marriage should be introduced so that same sex couples have the option of getting married if that is how they wish to demonstrate their commitment to one another."

The government has said it would like to hear from religious groups and ordinary people, and has indicated religious organizations will have freedom of choice in deciding whether to officiate at gay weddings.

A recent Scottish Social Attitudes survey showed that more than 60 percent of Scots believe same-sex couples should have the right to marry, compared with 19 percent who disagree; the rest said they don’t know. Some 66 percent of Scotland’s population of five million describe themselves as Christians, and about 690,000 are Catholic.

"What we have here is the start of a serious church-state confrontation," said Harry Reid, a former editor of Scotland’s The Herald and author of the best-selling book "The Reformation: The Dangerous Birth of the Modern World."

"For many Catholics, the idea of gay men and lesbians marrying in churches is just a step too far," said Reid. "Already, some of the most important leaders of the Catholic Church have said, ‘So far, no further.’ And there are divisions in the Church of Scotland following plans to ordain gay men as ministers. Whole congregations are threatening to break away later this year and form their own groups."

Other Christian groups, as well as Jewish, Muslim and Hindu leaders, said they are considering the consultation but have not yet responded.

The Church of Scotland refused to comment because of its moratorium on the gay ordination issue.

Rachel Lampard, Joint Public Issues team leader at the Methodist Church, said "The Methodist Conference would have to vote in favor of civil partnerships taking place in Methodist churches for the legislation to have any effect."

"All the legal rights of marriage are already available to homosexual couples through civil-partnership registrations," said Mike Judge of the Christian Institute in Scotland. "This is not about rights. This is about re-defining marriage for the whole of society at the behest of a small minority of activists."