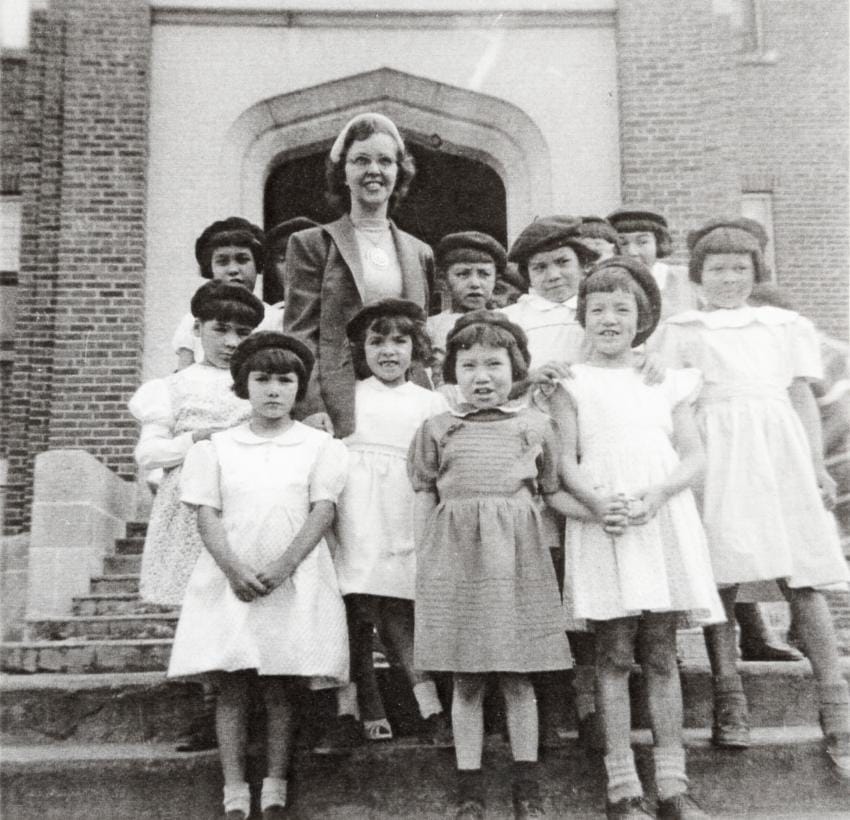 Bernice Logan (then, Bernice Mason) poses with some of her students at the Shingwauk Indian Residential School in the early 1950s.

They were not abusers. They cared for native children in the residential schools. They responded in good faith to a call from their church. They worked long hours for little pay in remote locations. Now, they are hurt and bewildered. Because some workers were abusive, all staff are suspect. Their church is busy apologizing to native people and no one cares about their feelings.

That is how some former teachers, supervisors and workers in the native residential schools system are feeling and they say they too need a road to healing.

One of the most vocal former workers is Bernice Logan, 71, of Tangier, N.S. She has formed a group called the Association of Former Indian Residential School Workers and telephoned and written numerous letters to newspapers, government and church officials to draw attention to what she sees as a great injustice.

“I have talked to over 100 (former) staff and I feel the staff have been unfairly targeted,” said Ms. Logan in an interview. “We don’t feel the church did anything wrong by taking these children and educating them. These schools were partly orphanages. Children with terrible home lives and children whose parents wanted them to come went to the schools.”

The Anglican Church of Canada operated 26 of 80 native boarding schools in a nationwide system that began in the mid-19th century and ended in the 1970s. Hundreds of natives have sued the federal government and the four churches that ran the schools, alleging sexual and physical abuse. Many also claim that the institutions damaged their ability to be good parents by taking them from their families and, by ignoring and demeaning their culture, tried to force them to assimilate into “white” society.

Ms. Logan taught for four years in the early 1950s in residential schools, two years at All Saints school in Prince Albert, Sask., and two years at the Shingwauk school in Sault Ste. Marie, Ont. Returning to Nova Scotia, she attended teachers’ college, taught in the provincial school system and raised a family. She volunteered for the Indian schools because, “I thought it sounded exciting to work with Indian children.”

She remembered happy times with children learning lessons, praying in chapel and going on picnics. She acknowledged that she was given no training or knowledge about Indian culture, but adds that “the children were there to be educated and the only way they could be educated was through learning English.”

Ms. Logan was inspired to begin talking about her experiences in 1991, when she saw a CBC movie, Where the Spirit Lives, which portrayed the schools as hellish places for native children. In the last 10 years, she has assembled a two volume, 700-page book, The Teaching Wigwams, that contains letters, stories, memories and photographs of life in several residential schools, including letters criticizing her views.

Ms. Logan is not alone in her belief that staff have been treated unfairly. As they approved contributions to the $25 million residential schools settlement fund earlier this year, the dioceses of Athabasca (in a letter from the bishop) and Fredericton (in a motion at synod) mentioned former staff. The Fredericton synod’s motion suggested that the primate, Archbishop Michael Peers, apologize to former school staff members “who have suffered through the process of litigation, accusation and pain.”

Ms. Logan said she felt the primate should not have apologized to native people in 1993 for the church’s role in the residential school system. “I don’t like to disagree with the primate, but once you’ve admitted you’ve done something wrong, you are going to be sued for it,” she said. She said she believes that where abuse is proven, victims should be compensated; she said she intends to contribute to the settlement fund.

Bishop David Ashdown, 52, of the mostly-native diocese of Keewatin, said he understands Ms. Logan’s viewpoint, but that many former workers seem to have a blind spot. Bishop Ashdown worked as a supervisor at the Stringer Hall school in Inuvik, N.W.T., for four years in the early 1970s. “Ten years ago, I was extremely defensive of the whole system,” he said. Gradually, he said, he came to realize that “there is a difference between the person in the system and the system itself” and what he once thought was a good system with a few bad people, he now sees as a bad system with some good people. “When you pull people out of their families and put them in an institution, it doesn’t matter how wonderful the staff are,” he said.

Ms. Logan has carefully collected photos from the schools and kept in touch with some of her former students. She recalled how she brought an orphan boy, Donald Nashkew, home to Nova Scotia for a summer. “He had a happy summer,” she recalled but later, as an adult, Mr. Nashkew “ended up drinking quite a bit.” He told her he felt he didn’t fit in either white or Indian society and “they found him dead in his room at age 47,” she said. The Teaching Wigwams is dedicated to Mr. Nashkew.

The Anglican church’s national archives has no statistics on the number of men and women who worked in the Anglican schools, nor on how many are living. Ms. Logan said her association has about 20 members and there are no plans for a reunion or other event. “We don’t have the money and the staff really aren’t that interested in getting together and holding each others’ hands. As far as we could see, the children were happy, the parents were satisfied,” she said. So far, membership has been limited to written correspondence, including a newsletter written by Ms. Logan.

Bishop Ashdown said his diocese plans to organize an event for former staff “to share their stories in a mutually respectful way.” At the Keewatin synod that approved the diocese’s settlement fund contribution, the aboriginal caucus formed a circle and Rev. Ron Evans, chief of the Norway House Cree nation, said “it’s time to forgive and move on,” said Bishop Ashdown. “Some of that has to happen in terms of the schools and the staff.”

‘Never seen anything this bad’

Recovering the blessing of a Métis heritage

Saying yes to God’s call—one seed at a time

Should Queen Elizabeth II be sainted?