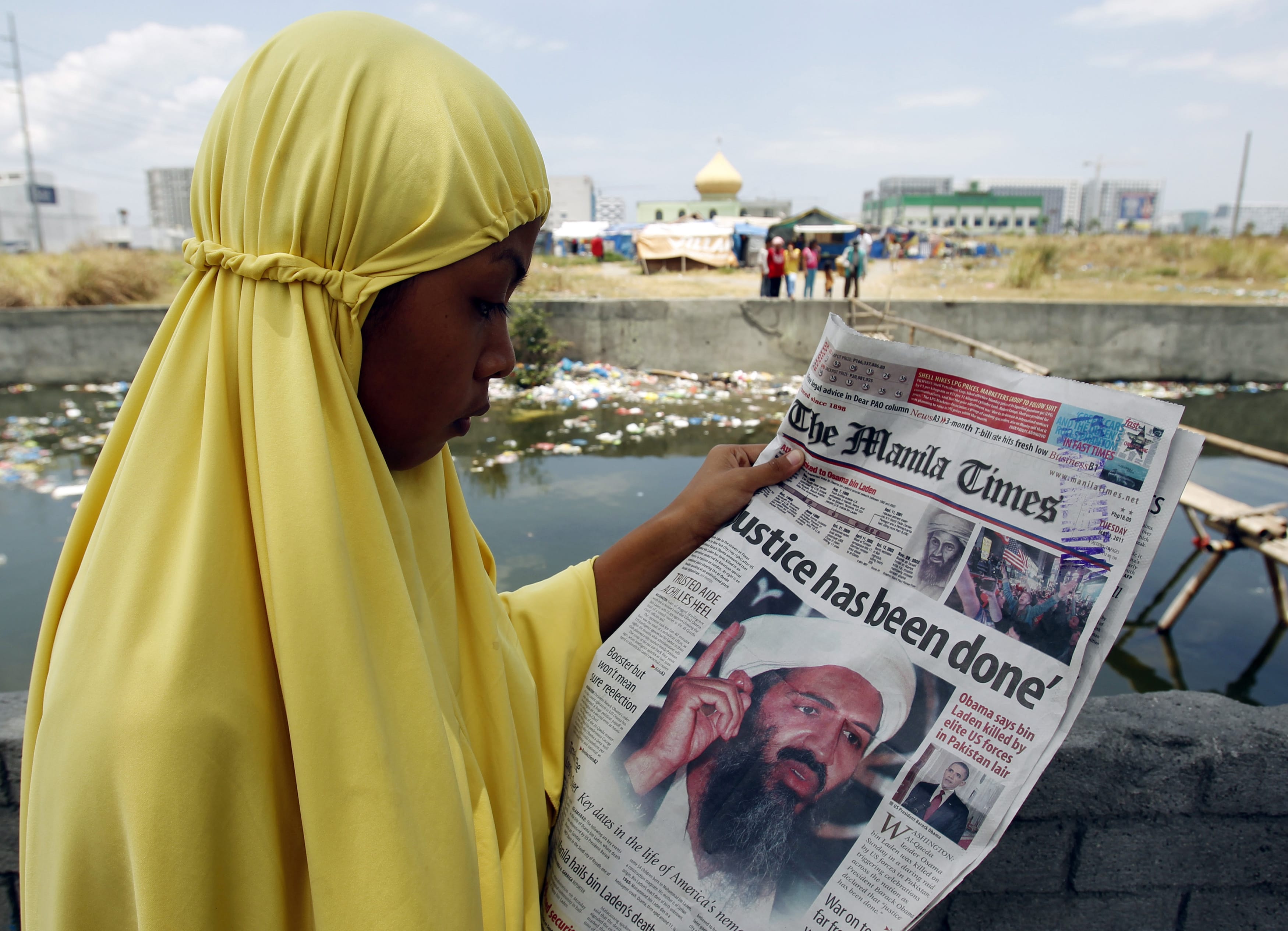 A MUSLIM woman in Manila reads about the death of the Al-Qaeda leader on May 1. In the U.S., some took to the streets to celebrate
Photo: REUTERS/Romeo Ranoco

A month ago, the world woke up to learn that an elite team of U.S. Navy Seals had entered a fortified compound north of Islamabad and shot dead the unarmed Osama bin Laden, the world’s most wanted man and the Al-Qaeda mastermind of the 9/11 attacks.

World reaction was swift, with many saying that justice had been done, others that a summary execution was no substitute for a fair trial. In the U.S., some took to the streets to celebrate. Alcohol was consumed, placards waved, fists pumped, high-fives exchanged. Everywhere there was a feeling of “Ding, dong, the wicked witch is dead.” The naked triumphalism would have put a victorious Roman general to shame.

After all, as Proverbs 24:17 exhorts, “Rejoice not when thine enemy falleth, and let not thine heart be glad when he stumbleth.” Similarly, Christ’s Sermon on the Mount tells us: “Love your enemies, bless them that curse you, do good to them that hate you, and pray for them which despitefully use you, and persecute you.”

And cathartic though it may have been for those still mourning loved ones lost on 9/11 or seeking a balm for a bruised national ego after a 10-year manhunt, was it appropriate, especially for the Christians among them, to take such obvious delight in the death of a fellow child of God?

The Anglican Journal asked Christians for their thoughts.

“I was saddened at the reaction to news of his death, as there seemed to be a sense of smug satisfaction in the media, which naturally translated, to a certain extent, to many people,” says the Rev. Chris Hayes, rector of the Anglican parish of Quispamsis, N.B. “No Christian person should feel any joy or contentment in the death of another, regardless of what that person did in their life here on earth. This reeks of judgment, and God has very sternly warned those who would judge others.”

Adds the Rev. Dr. Gary Nicolosi, rector of St. James Westminster Anglican Church in London, Ont. “I did not rejoice at bin Laden’s death, and I don’t think people were really rejoicing in the sense of jubilation and celebration as they did in the streets at the end of World War II. It was more an acknowledgment that, in some sense, justice has been done, that the person who planned these horrible attacks has been dealt with.”

In Winnipeg, the Rev. Dr. Canon Brett Cane, rector of St. Aidan’s Anglican Church, reminds us that according to the Book of Common Prayer, Christ “desireth not the death of a sinner, but rather that he may turn from his wickedness, and live.” Hence, “from a Christian point of view, we should be praying for his eternal soul. I did not rejoice. I was sad that it had to end this way in violent death-but neither did I judge those who felt it necessary to take this action,” he says.

Nor did Beverley Whitehouse experience jubilation. Whitehouse is a member of Christ Church Anglican Cathedral in Whitehorse, Y.T. “He was a human being, and as a Christian, I take no joy at anyone’s death. I worried more that the bloodbath was going to get worse now,” says Whitehouse, who watches the news specifically to offer prayer and intercession for events in our embattled world.

Adds an Anglican woman from a parish in rural Alberta: “God loved this man and made him in his own image, so I did not rejoice at his passing. But I do understand how the families of the victims of 9/11 might find a degree of closure in his death.”

Weighing in on world reaction, a Vatican statement said: “In the face of a man’s death, a Christian never rejoices, but reflects on the serious responsibilities of each person before God and before men, and hopes and works so that every event may be the occasion for the further growth of peace and not of hatred.”

Mardi Tindal, moderator of the United Church of Canada, who is also concerned about the event’s impact on world harmony, offers this question: How can our response to Osama bin Laden’s death contribute to healing? “Some of us have fallen into the temptation of taking satisfaction in this death,” she says. “As a result, we risk fuelling further violence. We must invest our energies in building relationships by which pain can be transformed rather than transmitted.”

A statement from the Archbishop of Canterbury, Rowan Williams, pointed to the need for the clear appearance of justice. “I think that the killing of an unarmed man is always going to leave a very uncomfortable feeling because it doesn’t look as if justice is seen to be done. …When we are faced with someone who was manifestly a ‘war criminal,’ as you might say, in terms of the atrocities inflicted, it is important that justice is seen to be observed.”

Those concerns about justice are echoed by Archbishop Michael Peers, who was primate of the Anglican Church of Canada during 9/11. “It’s clear that the action of the United States has avenged to some extent a grievance felt for 10 years, and the signs are there officially and popularly that people feel a grievance has been avenged.”

Archbishop Peers also points to St. Paul’s reminder: “Vengeance is mine; I will repay, saith the Lord” (Romans: 12:19). “The dominant Christian tradition has favoured justice over revenge,” he says, “but it’s hard to tell, knowing what we do of the circumstances and what options were open to the United States, what justice would look like in this case. History will declare whether what was done was, in fact, justice.”

Some say justice was, in fact, served, albeit roughly-by the killing of a combatant in a chronic state of war with the West. And one who was allegedly planning further mass deaths in the transit systems of Europe and North America.

In an early-May poll, 61 per cent of Americans surveyed said they believed bin Laden was rotting in hell.

Archdeacon Michael Pollesel, general secretary of General Synod, feels the U.S. intervention will accomplish little. “My initial reaction was: here we go again. All I could foresee was yet another cycle of violence,” he says. “On a rational level, I can understand why it happened, and even why it had to happen. However, I really don’t see that his death will have advanced the cause of world peace at all.” ?