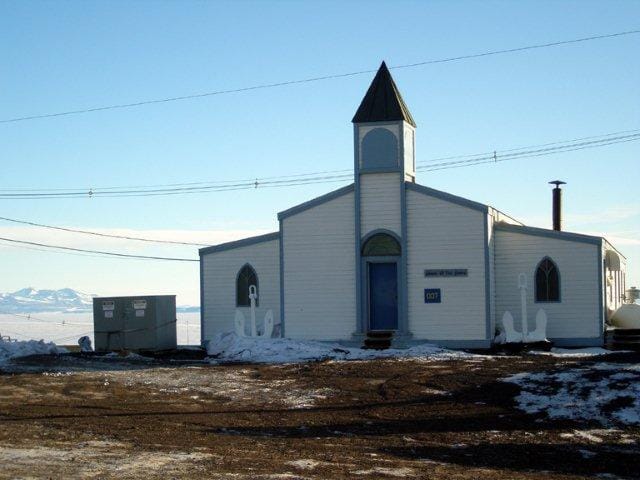 The Chapel of the Snows is the world’s southernmost dedicated religious building.

If you’re wondering where to worship on your next trip to Antarctica, never fear. You can visit the Chapel of the Snows, the world’s southernmost dedicated religious building.

Built in 1965 and destroyed by fire in 1978 before opening again in 1989, the chapel is situated at a latitude of 77.880 south, 840 miles from the south pole. It’s part of McMurdo Station, a U.S. scientific research facility overlooking McMurdo Sound on the southern tip of Ross Island, Antarctica. The inter-faith chapel is staffed in summer by Protestant pastors and Roman Catholic priests.

The 1989 building, seats 63 and features custom stained glass and the station’s only organ. The chapel also hosts religious services for Mormons, Bahai’s and Buddhists, as well as meetings of Alcoholics Anonymous.

Christians make up more than 70 per cent of the station’s summer population of about 1,000, which shrinks to 200 in winter. Ross Island is also home to Mount Erebus, the globe’s southernmost active volcano.