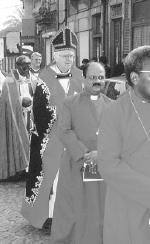 Archbishop Michael Peers was among the 38 leaders of the Anglican Communion who gathered in Porto, Portugal in March.

As expected, homosexuality proved to be the major dividing issue for 38 leaders of the Anglican Communion meeting here for the first time since the 1998 Lambeth Conference. But signals also emerged of an even sharper split on the broad question of how far primates can hold each other – and their churches – to account for actions of dioceses that challenge the position of the majority.

It was the issue of homosexuality that caused the most friction and the primates warned churches in their closing communiqué that ordinations of non-celibate clergy and blessing same-sex relationships “threatened the unity of the communion in a profound way.”

So far, only dioceses in the Episcopal Church U.S.A. have voted to reject Lambeth’s resolution that homosexuality is “incompatible with Scripture.” The Diocese of New Westminster, centred in Vancouver, votes in 2001 whether to ask the bishop to permit blessings of same-sex unions in certain parishes.

The primates’ communiqué said dioceses that flout Lambeth must “weigh the effects of their actions” and “listen to the expressions of pain, anger and perplexity from other parts of the Communion.”

In an interview after the U.S. House of Bishops met in Los Angeles in the wake of the Portugal meeting, American primate Frank Griswold said it was “unrealistic” to expect liberal Episcopal dioceses would change their course.

In an interview with the Los Angeles Times, Bishop Griswold said, “I cannot imagine any diocese altering its present direction in the light of anything that has happened, either here or in Portugal.”

The feeling of freedom to ignore Lambeth resolutions and warnings from the primates is part of the larger divide between different parts of the church.

Primate Michael Peers said one good thing about the communiqué was that it “doesn’t try to make Lambeth resolutions the object of canonical obedience.”

Lambeth is a once-a-decade meeting of all Anglican bishops in England. Its resolutions are only advisory and have no legal status in any of the member churches.

“It’s not about allowing or disallowing” anything, said Archbishop Peers, noting that resolutions are “received” by the churches around the world.

He also said he believes a “substantial majority of the primates” feel that way.

One primate who is challenging his fellow leaders to be more accountable to each other is Maurice Sinclair, bishop of Argentina and primate of the Southern Cone.

He said the primates’ message from Portugal is that “there are limits” to Anglican diversity.

Archbishop Sinclair said it is not appropriate for some decisions to be made at the local (diocesan) level. He said dioceses need to be told they “are not competent” to make certain decision.

He said he doesn’t want a “kind of curia,” like the Roman Catholic Church, but said “there needs to be a process of decision-making.” And he said he wants to see more emphasis put on a 1988 Lambeth resolution reaffirmed in 1998 urging that “the primates’ meeting is able to exercise an enhanced responsibility in offering guidance on doctrinal, moral and pastoral matters.”

He was joined in his concerns by the Archbishop of Rwanda, Emmanuel Kolini, who was quoted after the meeting as saying he saw a sign of hope in “keeping the unity, frank and honest expression, and reminding each other of mutual accountability.”

It was the first meeting of the primates since the 1998 Lambeth Conference where the debate on homosexuality became strident, but “there was a real absence of the incivility that marked Lambeth,” Archbishop Peers said.

And although the primates warned liberal dioceses about the effect of thumbing their nose at the Lambeth resolution, they didn’t go further by chastising them or driving them out of the Communion.

Instead, primates said for a church to break communion with the Archbishop of Canterbury would require a formal and public repudiation of an 1888 Lambeth resolution that accepts Scripture as the “rule and standard” of faith, the creeds of the undivided church, the two sacraments of baptism and eucharist and the historic episcopate – a term referring to bishops being successors to the first Apostles of Jesus.

The statement said a “careful, patient and pastoral process must be encouraged; it is not created by the demonizing of opponents or by overheated, politicized and polarized language in our conflicts.'”

While the disagreement over sexual ethics is a threat to church unity, it “does not necessarily amount to a complete and definitive rupture,” said the statement.

Archbishop Sinclair called the statement “careful and wise” but, asked if he regarded a diocese that votes to endorse same-sex blessings to have broken this test of being in communion, he said, “there is de facto impaired or broken communion when one part of the communion does something another part doesn’t accept.”

Archbishop Kolini was even more blunt. Asked by reporters following the Portugal meeting if a diocese voted to reject the Lambeth resolutions, would the primates consider this an automatic break in the Communion? he replied, “I think that is what the communiqué says.”

One significant event the primates didn’t accept was the January consecration of two American priests as “missionary” bishops by the now-retired primate of South East Asia, Moses Tay of Singapore, and Archbishop Kolini. Defying all convention, they consecrated two bishops to provide oversight to conservative parishes in the United States.

In response, the Portugal communiqué said the primates were “grateful for [the] clear and decisive response” of the Archbishop of Canterbury to the consecrations in Singapore.

At the time, Dr. Carey said the consecrations were valid but irregular, meaning the men wouldn’t have to be consecrated again if they were ever elected to a diocese in the U.S. but, until then, he wouldn’t recognize them as having any jurisdiction as bishops in the Communion.

On the importance of evangelism in their own churches, the “decisive authority” of Scripture and battling world debt, however, the primates were all agreed.

One of the earliest responses from the church to the communiqué came from bishops of the Diocese of Sydney, Australia. In a stinging indictment, they said, “While there is a welcome emphasis on the authority of the Scriptures in the life of our Communion there is a regrettable ambiguity when it comes to the application of Scripture to the challenging issue of sexual relations between members of the same sex.

“It is simply unacceptable to leave the matter as something reflecting regional differences and as an issue unrelated to the question of the Church’s integrity,” the bishops said, adding the were “greatly disappointed” so far with the outcome of the meeting.

But the Communion’s longest-serving primate, Archbishop Khotso Makhulu, who has been primate of Central Africa for 20 years, took a different view. “There has been a nudge forward from the mood at Lambeth to where we are now on the question of sexuality,” he said. “It is my hope that we have halted or slowed down conservative ascendancy.”

One American observer thinks that happened. Rev. Patrick Mauney, director of the Office of Anglican and Global Affairs said “the conservatives didn’t get what they wanted. In fact, it ended up being a roaring defeat for them.”

In an interview with ENS, he noted that ECUSA was not directly condemned or chastised in the document, no directives were aimed at U.S. dioceses who have repudiated Lambeth’s resolution on sexuality, and there was no suggestion of regularizing the consecrations in Singapore or opening the possibility for a parallel province in the U.S.

The final document, he said, was “a classic compromise – no one was completely happy with it.”

Nineteen of the 38 primates were attending their first full meeting since 1997 in Jerusalem. The reason for choosing Porto was to show solidarity with the small Lusitanian (Anglican) Church there.

Media were kept far from the meeting, which was held in a bunker-like concrete Roman Catholic seminary. But primates did venture out occasionally and a large delegation of Americans from most of the major conservative groups were present and met at some length with Archbishop Kolini.

Several sources said the Archbishop of Canterbury, who had the final say in the agenda for the meeting, played a crucial role in keeping the meeting – and possibly the Communion itself – together.

At the Sunday service in the middle of the meeting, he preached humility and patience. “This is not about sexuality, but service; not about gratification, but God’s glory.”

“We are here in Porto as Primates, bearing the weight of our provinces, to meet with our questions and to seek, under God, his answers. But I have found over the years that the answers do not usually come at once. Waiting often precedes the answers. And we shall serve our Communion best when we are patient and wait together with humility to accept what we need to understand.”