Home » Primacy ‘through the lens of mission’

Primacy ‘through the lens of mission’ 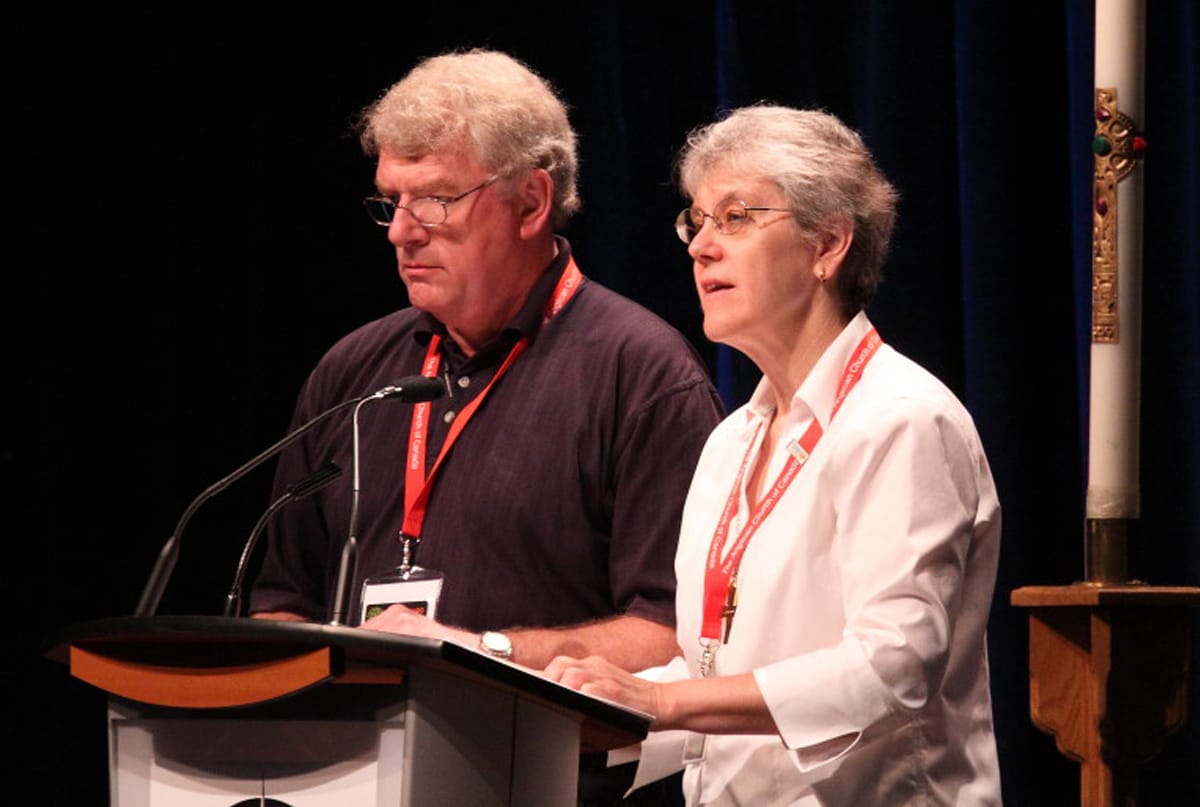 Members of General Synod today approved canonical changes that define more clearly the sacramental and pastoral ministry of the primate (national archbishop) of the Anglican Church of Canada. These changes reflect a leadership more attuned to today’s world.

“In our consultations we have learned that models of leadership cannot remain static. They need to be constantly refreshed and renewed as changing times demand,” said task force member suffragan bishop Linda Nicholls of the diocese of Toronto. “The old models of hierarchy and top down authority no longer work or command respect.” What works is a leadership that is “collaborative and visionary, risk-taking and innovative,” she said.

The 2007 General Synod had called for a task force to conduct “a detailed study of the role, duties and functions of the primate, and recommend changes, if any, to Canon III.” In the fall of 2007, the Council of General Synod (CoGS), the governing body between General Synods, created the task force.

A new section on Canon III on the primacy now expects the primate “to exercise the apostolic ministry of a bishop throughout the Anglican Church of Canada, primarily by teaching and preaching the Word of God in Scripture.” The primate is also expected to lead the national church “in discerning and pursuing the mission of God.”

Subject to the invitation of the diocesan bishop, the primate can now preside at sacraments of baptism, Eucharist, confirmation and ordination during pastoral visits across the national church in Canada. The primate will also act as chief consecrator of the National Indigenous Anglican Bishop and the Bishop Ordinary to the Canadian Armed Forces.

Another significant change allows the primate to speak with a prophetic voice on behalf of the Anglican Church of Canada, “in consultation with metropolitans (senior bishops) and/or the bishops, and the General Synod or its Council, as appropriate.”

Bishop Michael Ingham of the diocese of New Westminster, chair of the Task Force on the Primacy, said “we have chosen to look at the primacy through the lens of mission, asking ourselves, ‘What should be the role, functions and responsibilities for the leader of the church who is being sent out to pursue the mission of God?’ ”

In its report, the task force noted that the “absence of a defined sacramental and liturgical ministry for the primate has been a source of much reflection and concern both in Canada and elsewhere.” Interviews conducted with current and former primates showed that “a wide variety of practices exist across the Canadian church, ranging from minimal acknowledgment of the primate’s presence and ministry in some places to full honour and respect in others.” The new section addresses this “deficiency,” while taking into account the jurisdiction of local bishops.

The task force looked into how free the primate is to speak out publicly on behalf of the national church and exercise a “prophetic ministry.” It concluded that while some see that the primate as limited in making public pronouncements, others were cautious about authorizing a primate “with a ‘carte blanche’ to speak alone or without the support of the church as a whole, particularly on matters of controversy, disagreement, or sensitivity, that could cause scandal or harm.”

Another new provision provides that the primate shall have “a visible role in the installation of metropolitans, including, if invited, presiding at their installation.” The original recommendation had been for the primate to install the new metropolitan, but was revised after differing views across the church were expressed. Nevertheless, the primate, under a new section, is defined as senior metropolitan who is primus inter pares (first among equals) among the provincial metropolitans (senior bishops).

Bishop Ingham said it was not the first time that the church undertaken a review of the primate’s role. “Similar studies have been undertaken throughout the last 117 years,” he told General Synod. “It seems that our church is deeply and constantly aware of the importance of leadership and our church acts every few years to ensure that the primate is properly empowered and appropriately directed to guide our church through the changing times, and shifting priorities in which we find ourselves.”

“What we present today is a reflection of what the church across this country has said it wishes to see in the ministry of our primate. Our report represents a wide consensus, though not unanimity,” he said. “There are regional differences and regional perspectives that make up the spectrum of Canadian Anglicans.”

Bishop Ingham also said that there is “a strong sense of pride across this country in the way leadership has been exercised by our various primates in recent years.”

Bishop Nicholls noted that every province of the worldwide Anglican Communion has developed a model of primacy that reflects their unique identity and context. “In Canada, our primate is expected to act and speak collegially and in consultation with the synodical processes of our church such as this one,” she said. “In other places, the primate has a more presidential authority and can claim the right to speak for the church…”