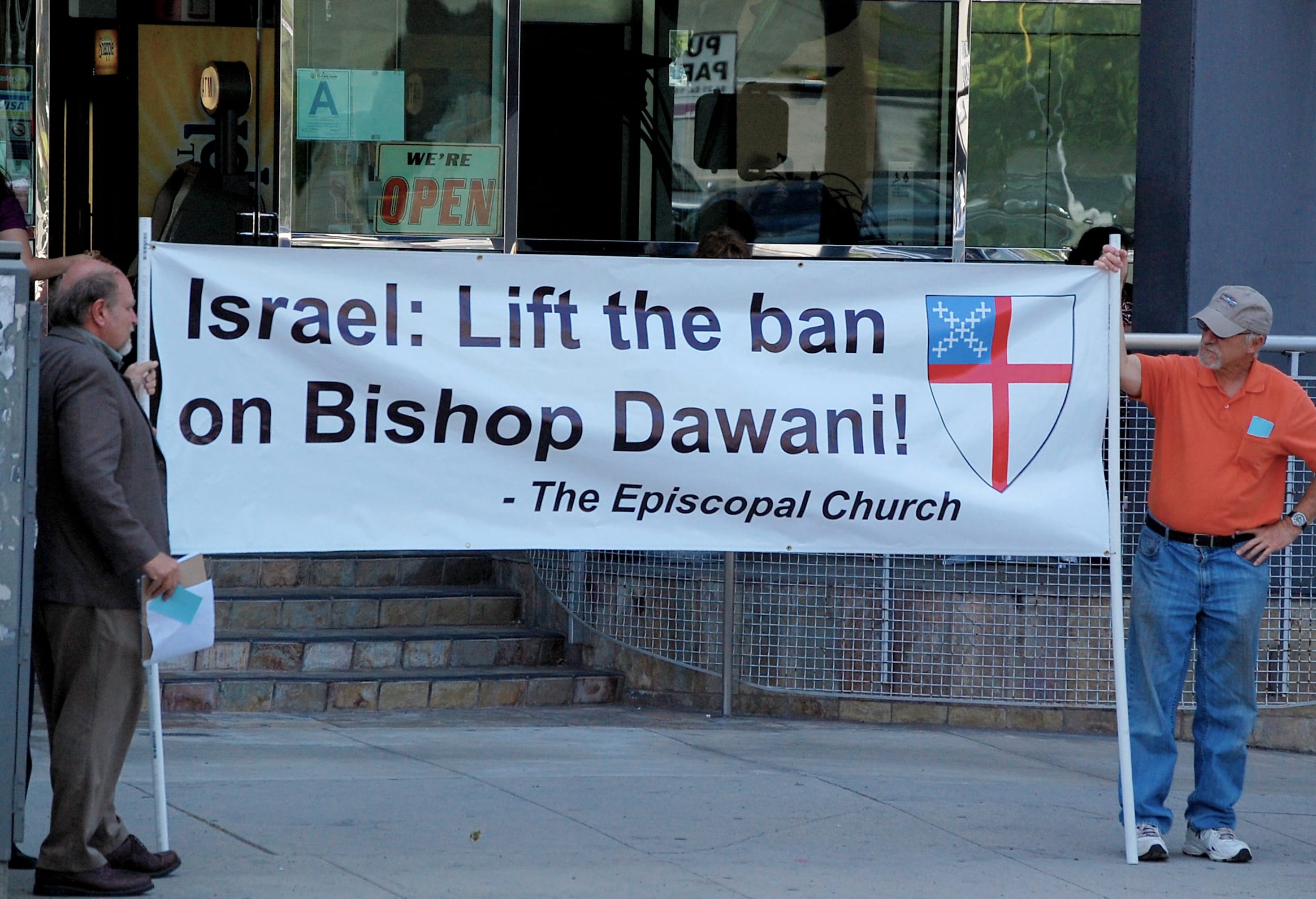 Protesters hold a vigil outside the Israeli consulate in L.A. to call attention to Israel’s refusal to grant a residency permit to Anglican Bishop in Jerusalem Suheil Dawani. Photo/Chris Tumilty, Diocese of Los Angeles/ENS

Episcopalians in Washington, D.C., and Los Angeles held silent prayer vigils in protest of Israeli treatment of Palestinians on May 24, the day Israeli Prime Minister Benjamin Netanyahu addressed a joint session of Congress about the peace process.

They sought to send a message about the Israeli government’s policies towards Palestinians in general and specifically the refusal to grant Anglican Bishop Suheil Dawani a permit to reside in Jerusalem. As bishop of the Episcopal Diocese of Jerusalem, Dawani, a Palestinian Christian, oversees congregations and institutions in Israel, Jordan, Lebanon, Syria and the Palestinian Territories.

"He [Netanyahu] passed by us. I don’t know if he paid attention to our signs or not" on his way to the Capitol, said the Rev. Susan Burns, rector of the Church of the Redeemer in Bethesda, Maryland, in the Diocese of Washington, D.C.

Netanyahu was in Washington, D.C., to address the joint session about alternatives for a meaningful peace process in the Middle East, four days after rejecting President Barack Obama’s vision for ending Israeli-Arab conflict in the troubled region. His address has been considered both an attempt to garner additional support for Israel and an effort to avert an upcoming United Nations vote to establish a Palestinian state over his government’s objections.
About 40 Episcopalians, Lutherans, Presbyterians and others held aloft signs designed to "inch by inch, call the leaders of Israel back to their better selves," Burns said during a telephone interview at the conclusion of the two-hour vigil.

"The signs had quotes from Leviticus about welcoming the stranger, and from Rabbi Hillel about what is hateful to you, do not do to your neighbor," she said.

Later in the day, a dozen or so Episcopalians and others in the Diocese of Los Angeles gathered along Wilshire Blvd’s Miracle Mile District, in front of a building housing the Israeli Consulate. The protesters stood beneath the flags of Israel, the United States and the state of California flown over the consulate.

Randy Heyn-Lamb distributed flyers to passersby during the silent vigil while others held a banner, facing the busy midday traffic, which bore the shield of the Episcopal Church and a message: "Israel: Lift the ban on Bishop Dawania?”the Episcopal Church."

Dan Harston, 69, wearing a T-shirt bearing the message "Christ was a Palestinian," said he joined the vigil because he decided to become more involved "after realizing what was happening in Palestine. The more I heard the more I got upset," he said.

The Rev. Darrell Meyers, a retired Presbyterian pastor, joined the group, as did Paul Waller, wearing a yarmulke, who described himself as a "secular Jew." Both said visits to the Holy Land opened their eyes to the plight of Palestinians and inspired them to work for justice and peace.

"I was in Jerusalem on Ash Wednesday and Bishop Dawani put ashes on my forehead," Meyers said. "This church is part of the first church handed down through the ages. Please hear our call to help them. Know that we’re here. We need to have American Christians be aware that they are there and what is happening to them and that we can’t abandon them."

Waller said: "There is an injustice being perpetrated in the Holy Land. I wore my yarmulke to make a statement, to show that I am Jewish and I support this effort."

Consul General Jacob Dayan, whose offices are located on the 18th floor of the Wilshire Blvd. building, was notified by letter of the vigil, but did not respond, said Heyn-Lamb, a member of the diocesan Commission on the Middle East, which organized the vigil.

"We are using the opportunity of Prime Minister Netanyahu’s address to Congress to stand in support of Bishop Suheil Dawani, who is still without a court date to decide whether he can have his residency permit or if these allegations of impropriety will be dismissed," he said.

After petitioning the Israeli court in late February, Dawani was given a May 18 court date. But that hearing was cancelled "due to a change of venue, in accordance with Israeli law and at the recommendation of the Attorney General of Israel, for this hearing to place in the Supreme Court," according to a May 13 statement issued by Dawani.

Bishop Chane, in his May 24 statement, said it was unlikely that Netanyahu would "speak about his government’s cavalier disregard for the religious liberty of Palestinian Christians or that Israel has sapped the strength of Anglican Christianity in the Middle East by smothering the ministry of its leader under a blanket of false charges" during his address.

Chane and other religious leaders, including Presiding Bishop Katharine Jefferts Schori of the Episcopal Church, Archbishop of Canterbury Rowan Williams and the Chief Rabbi of Jerusalem, have all joined the effort to reinstate Dawani’s visa and residency cards for his family.

Renewal of Dawani’s residency permit, which he had held since 2007, was denied in September 2010 after an unnamed source accused the bishop of selling Israeli land illegally to Palestinians. Dawani has "categorically denied" the charges, Chane said in his May 24 statement.

"The bishop is especially vulnerable when he leaves Jerusalem to tend to his far-flung diocese, which includes schools, churches and hospitals in Israel, the West Bank and occupied territories, Gaza, Jordan, Syria and Lebanon," said Chane, whose diocese has a companion relationship with Dawani’s.

"The single injustice done to Bishop Dawani points beyond the bishop to thousands upon thousands of Palestinians whose liberties have been infringed, whose strength has been sapped and whose hopes are frustrated by an insensitive, unbending bureaucracy that too often disregards their dignity and wellbeing," according to Chane’s statement.

"These Palestinians have no one to bring their individual sufferings to the public’s attention. If the Israeli Government cannot do right by Bishop Dawani, what hope is there for them?"

Los Angeles Bishop Jon Bruno, who has led more than 50 pilgrimages to the Holy Land in the past 30 years and whose diocese also enjoys a companion relationship with Jerusalem, was traveling and could not be reached for comment May 24.

But in an earlier statement Bruno had said the absence of a residency permit inhibits Dawani’s ability to provide not only tangible, but also spiritual assistance to congregations and institutions under his episcopal oversight.
Both groups emphasized that Dawani is a peacemaker and that the vigils were not held in opposition of the Israeli government, but as an efforts to call attention to the injustice.

"We were there because we are friends of Israel," said Burns of Church of the Redeemer in Bethesda. "We love the Jewish people, the Jewish tradition and we are saying that the message that is at the heart of your tradition, which is a tradition that we treasure, is of fairness and we’re calling you to live by that message."

Heyn-Lamb agreed. He was among a group that met with Israeli Consul Jacob Dayan in March to express concerns about Dawani’s plight and request assistance.

"We have no animosity toward the consul or the state of Israel," he said. "We’re here because this is our access point in Los Angeles and this is where we are standing in solidarity with our brothers and sisters in Palestine and with our brother Bishop Dawani."

— The Rev. Pat McCaughan is a correspondent for the Episcopal News Service. She is based in Los Angeles.