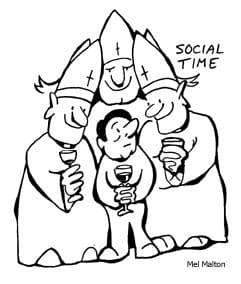 Scrumptious spreads of cheese, crackers, fruit, mini wraps, pate, vegetables with dip and kebabs were laid out for delegates during socials held at various nights after the end of plenary sessions at General Synod.

Wine, beer and juice flowed as delegates mingled, exchanged pleasantries as well as their take on various issues debated on the floor. There were no heated debates, however, as delegates made sure to just unwind after a hard day’s work (which was an endurance test considering that most were up at 6:30 to catch breakfast before rushing to the daily home group meetings at 8 a.m. and to plenary from 9 a.m. to 9 p.m.).

A reception hosted by the diocese of Niagara at the university’s Pond Inlet reception area on the first night of General Synod attracted the most number of delegates who were eager to socialize. A young jazz band played as guests trickled in (many could not find their way since the university buildings were a maze). As the party heated up close to midnight, some delegates took the floor and danced.

Other socials were held at the same venue by the dioceses of Toronto and Rupert’s Land, and theological colleges. Anglican Book Centre also held a book launch of Hugh McCullum’s biography of former primate Archbishop Edward “Ted” Scott, Radical Compassion.

The diocese of Rupert’s Land – which will host General Synod in 2007 in Winnipeg – took pains to have a festive decor, hanging colourful balloons as well as scenic posters of Manitoba on the walls. Its delegates were outfitted as voyageurs.

As the days wore on, however, fewer people attended the socials, although there was no other watering hole on campus or within walking distance. Delegates from the diocese of Calgary were glued to televisions watching a playoff series of hockey games featuring their beloved Flames. Others were simply too tired to stay up for the socials, which, on some occasion, ended way past midnight.

Those who stayed, however, were rewarded with glimpses of their bishops and church leaders just having a good time.