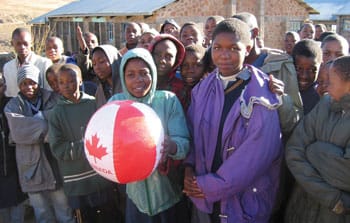 The children of Sefapanong Primary School near the village of Paray, Lesotho, are twinned with Turnbull Learning Centre, a private school in the diocese of Ottawa. The relationship was spearheaded by a parishioner of St. George’s, Ottawa, and her friend, a high school principal in Lesotho.

Peg Herbert, a parishioner of St. George’s, Ottawa, is spearheading a program for children in Lesotho, especially those orphaned by parents who have died of HIV/AIDS.

Project Help Lesotho, which Ms. Herbert developed along with Alice Mputsoe, a member of the Sisters of Charity and principal of a high school in Seboche, Lesotho, has raised funds to provide internships, training opportunities for students, and support for a sewing project aimed at developing young women as entrepreneurs. Ms. Herbert produced a fundraising calendar with her own photographs from Lesotho.

The two women – who became friends three years ago – have also worked on the twinning of six schools, among them, Ottawa’s Rockcliffe Park Public School, with the Guardian Angel Primary School in Pitseng, Lesotho. Rockcliffe students solicited donations from parents and the public at their annual book fair and raised $1,300. The money will fund a student awards program and purchase sports equipment for the Lesotho school.

The project also supports 40 orphans and has arranged for hundreds children in Lesotho to receive letters from Canadian pen pals.

One of the poorest countries in the world, Lesotho has the fourth highest rate of HIV/AIDS infection. It is a small country surrounded by the Republic of South Africa.

More information about Project Help Lesotho is available at www.helplesotho.ca