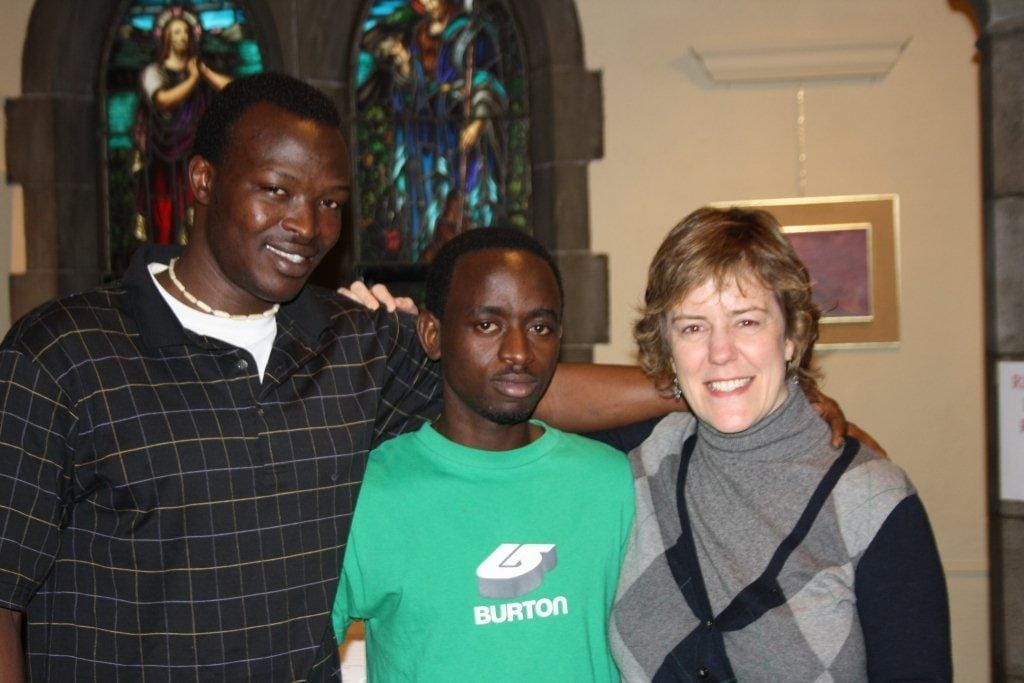 It was an ugly incident that might have left one newcomer to Canada emotionally scarred and jaded. Instead, after one woman’s conscience urged her to act,

it led to a warm friendship.

Gilbert Nshimyumukiza, 23, a Rwandan refugee claimant living in Montreal, was taking the subway to church one Sunday morning last December when he started to feel faint. After he crouched against the wall on the subway platform, police approached and questioned him. Despite protests that he was simply feeling ill, they issued a $100 ticket for lying on the ground.

His condition traces back to his harrowing childhood as a survivor of the Rwandan genocide: “I have many problems in my mind from 15 years ago when I saw my parents killed in front of my eyes,” Nshimyumukiza told the Montreal Gazette in a Dec. 2 story.

The story might have ended there – just another sad tale in a big Canadian city – but instead, it led Nshimyumukiza and his roommate, another refugee claimant from his village of Kinyinya, into a new family, at a Montreal church.

“I read (the Gazette story) when it came out and just felt hideous,” said Fiona Crossling, a member of St. Peter’s Church and associate director at Share the Warmth, a local service organization that provides food and warm clothing to the disadvantaged. “Having known what Rwandan Tutsis have been through, to have him come to a place that’s supposed to be safe and then be treated that way…”

The story bothered Crossling for nearly a week before she searched the man’s name on the Internet and phoned him. She first spoke to Nshimyumukiza’s roommate, Jean-Baptiste Mukiza, 24, whom she invited to St. Peter’s, where her husband, Rev. Chris Barrigar is rector.

The congregation and Mukiza prayed for Nshimyumukiza, who was by then being treated in hospital, and for both men’s refugee hearing, which was imminent. (Both refugee claims were approved Dec. 15 and the men are now applying for permanent resident status while they study to become nurses’ aides).

The worship led to lunches, ice skating and skiing outings and now the men are an integral part of St. Peter’s, a church situated in Montreal’s affluent neighbourhood of Mount Royal. The parish borders a multicultural area and its makeup reflects the cultural mosaic. Last year, the Christmas service featured 16 languages, including a Bible reading by Mukiza in his native language of Kinyarwanda.

The Rwandan men also now lead the Friday night Bible study and have volunteered at Share the Warmth, stocking the foodbank.

Nshimyumukiza, whose father was a pastor, said his new church community has given him and Mukiza “a chance to be closer to God.

“St. Peter’s is family, because if we are with them, we feel at home,” said Nshimyumukiza.

The church is now helping with the men’s costs of becoming permanent residents. Yet, for all that St. Peter’s has given to its new members, it is the parish that feels most fortunate.

“I know God is doing something very important through them,” said Crossling. “I think a big theme for us has been what does it mean to be community?

“I think this has put feet on that question: being community means representing our community and being diverse and hearing from the suffering world and participating with them in that. Bringing people into community and also being changed as a community because of those who come.”

An observer in a neighbouring parish, Rev. Canon Nick Brotherwood, who leads a congregation called Emerge in downtown Montreal, said he was struck by the fact that while many people heard the news about Nshimyumukiza’s ordeal, Crossling was moved enough to track him down via the Web, phone him and invite him and his friend to St. Peter’s Church.

“Just the fact that a lay person pursued it and it led to something, I thought was exciting,” said Brotherwood. “Something kind of small and seemingly insignificant can be very significant.”

– Leanne Larmondin is former editor of the Anglican Journal.