Of old and new gospel paradigms 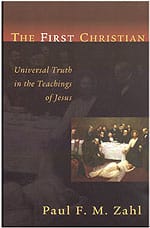 The First Christian
Universal Truth in the Teachings of Jesus
by Paul F.M. Zahl
Eerdmans
148 pages, $25.99

Every few centuries the Christian community convulses in a period of acute upheaval. It is called Reformation and it would appear that today we are well launched into such a period. It began in the mid-twentieth century (Vatican II, Anglican Congress, 1960s culture, etc.) and only God knows when it will end. The l6th century version began in the 1520s and went on until the 1650s. Usually Reformations are messy affairs and there is no reason to think that it can be otherwise today, although it may be less bloody.

The debate is always between those who want to move forward in faith into renewed understandings of the gospel and those who resist any change from a past with givens they consider absolute. And while this divides bishops, theologians, pastors, and usually a limited proportion of the laity, it must never be forgotten that greater numbers in the Christian community will continue to worship and live their lives as the Christians they believe themselves to be while the debate goes on. There are also those who search for a middle ground to maintain unity within the Body of Christ and we should thank God for that.

Our attention lately has been centred on issues of sexuality, thanks in large part to the proclivity of the secular press to centre its attention on whatever may appear to be sensational and divisive in the churches. Beneath the surface, however, what is at stake is of far greater significance ? our understandings of the role and authority of the scriptures as the Word of God and our understanding of Jesus, who he is and what he represents. Two recent books may assist in gaining a perspective on the debate.

Marcus J. Borg, a professor of Religion and Culture at Oregon State University who was an active member of the “Jesus Seminar,” in The Heart of Christianity addresses the question, “What does it mean to be a Christian today?” In constructing his answer he identifies what he calls “an earlier vision of Christianity” and presents what he believes is “an emerging vision.” It calls for a change which, in our day, becomes “virtually a tale of two Christianities.” He sees the earlier vision, however appropriate in former generations, as locked up in a past world of dogmatic certainties, incapable of achieving a true “born again” transformative experience which is both individual-spiritual-personal and communal-social-political which, “though not identical, are indissolubly linked.”

Central to western Christianity is the question, “Do you believe that Jesus died for our sins?” His answer: ” ? historically, no, I don’t think that Jesus literally died for our sins ? I don’t think he thought of that as his divinely given vocation ? I do have faith in the cross as a trustworthy exposure of the evil of domination systems, as exposure of the defeat of the powers, as the revelation of the ‘way’ or ‘path’ of transformation, as the revelation of the depth of God’s love for us, and as the proclamation of radical grace.” His view of the scriptures is that they are the Word of God, metaphorically and sacramentally present to us as 21st century people living in the 21st century.

The traditional paradigm is more evident in The First Christian by Paul F. M. Zahl, dean of the Cathedral Church of the Advent in Birmingham, Ala. He is critical of the “quests” for the historical Jesus including the work of the Jesus Seminar. He is concerned mostly about the direction of contemporary New Testament scholarship which he feels waters down the discontinuity of Jesus from his Jewish roots. “The distinction is the thing, notwithstanding the bloodlines, and more, of continuity.” He wants to get at Universal Truth in the Teachings of Jesus, the sub-title of his book, which he believes to be the basis for claiming the universality of Jesus as the world’s saviour.

It is his theory that, “Jesus was the first Christian, whose discontinuities were the seed of his universal interest and aptness. This was because of his astonishing will to say one thing: “Repent, everyone, for you cannot save your far-gone selves.” He believes that “Repentance is the defining human act, the existential definition of what it means to be a man or a woman. Jesus’ centering on this act expunges all theologies of effort and also of willpower.”

Where will a middle ground be found between such divergent, passionately held positions? Perhaps we should never forget that God is beyond our imaginings ? and always more than our theologies.