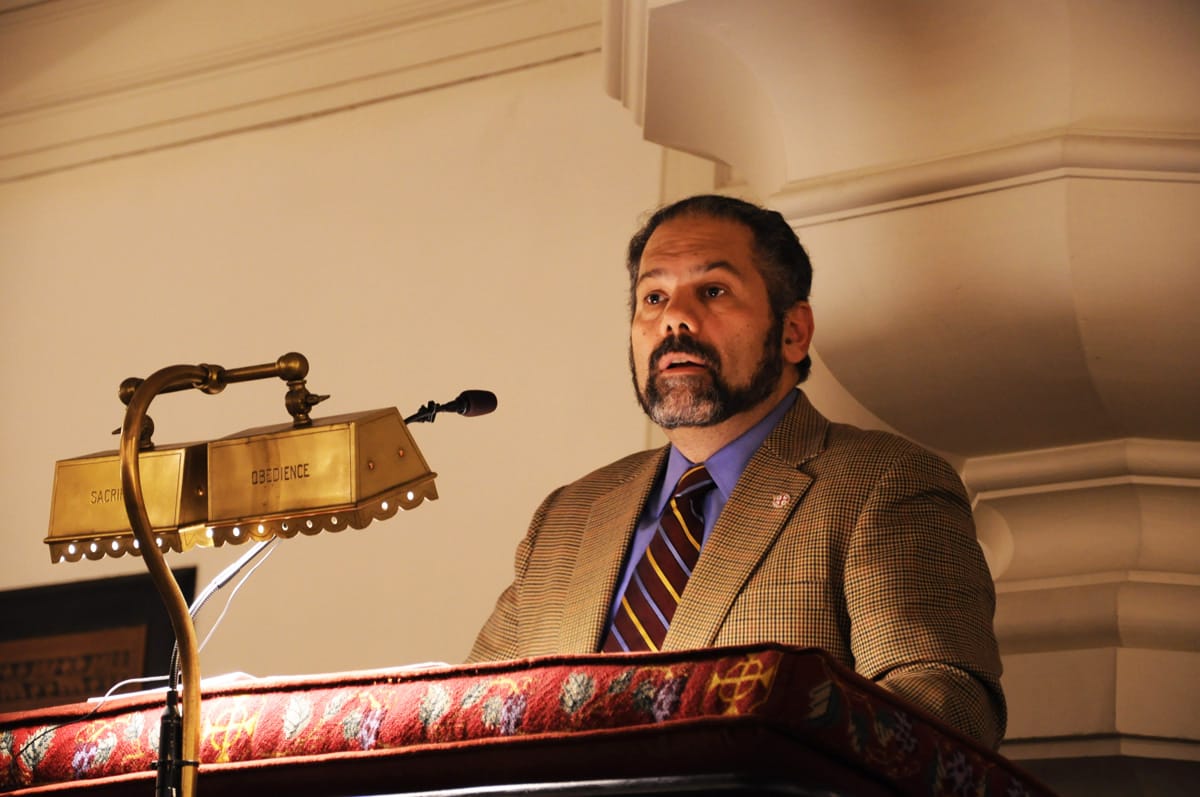 Just inside the door of the Church of the Holy Sepulchre in Jerusalem is the Stone of Anointing on which tradition says Jesus was prepared for burial. Watching pilgrims from all over the world fall to their knees to kiss the stone "makes you reconsider what it all means to them to you, to the people who live there, to the people who live far away," according to Public Broadcasting Service Senior Correspondent Ray Suarez.

Suarez made his remarks Oct. 7 at St. Peter’s Episcopal Church in the historic part of downtown Philadelphia. His talk was hosted by the American Friends of the Episcopal Diocese of Jerusalem with the sponsorship of Philadelphia Theological Institute, the Diocese of Pennsylvania‘s Middle East Study Group and St. Peter’s Church.

In 2009 Suarez hosted a PBS documentary, "Jerusalem: The Center of the World," which gave viewers a historical look at the city where Jews, Christians and Muslims have come for centuries to look for God. His presentation in Philadelphia highlighted the process of making the film and his observations about the disputed city and its fate.

Those observations, he acknowledged, stem in part from his faith and thus present a greater challenge than does his reporting of other stories during which "by professional habit and by temperament and by a lifetime’s practice I keep careful arm’s distance to all of it."

In Jerusalem, however, "my own life and personal profession as a Christian means that these places are not just places on a map to me," he said. Suarez is a member of St. Columba’s Episcopal Church in Washington, D.C. and preached during the church’s last meeting of General Convention,

Suarez noted that many members of the world’s growing middle class can afford to come to Jerusalem and experience it first-hand.

He noted that "the more people go there, the less abstract the question [of Jerusalem’s future] is and maybe the less willing you are to see people really spill blood over the future of this place."

And yet, he said, there is no simple solution to the Israel-Palestine stalemate.

Jews and Muslims cannot assert their vision of the future "without having to control, sanitize, engineer memory" and attempt to erase each other’s histories "as if the two aren’t intimately related," he said.

"If there’s going to be a settlement to the endless haggling over Jerusalem, one of two things has to happen," Suarez said. "Either one side wins and gets everything it wants, and the other side agrees, or the two sides work out an agreement that give each side just enough that leaders can turn about to their respective people and say ‘OK, we didn’t get everything we want, but this ends the conflict and that’s a blessing in itself.’"

Neither outcome seems very plausible, according to Suarez, in part because both sides "operate out of endless hostility and suspicion of each other’s motives." It was abundantly clear, he said, on Sept. 24 when Israel Prime Minister Benjamin Netanyahu and Palestinian President Mahmoud Abbas addressed the United Nations. Each gave a litany of grievances about the other and staked out positions that will be hard for the other to accept, he said.

"Since a one-state solution is, to say the least, extremely unlikely … it is hard to know at this point what it is Israel will offer except, given what Prime Minister Netanyahu had to say at the U.N., whatever the offer, it will be difficult for Mahmoud Abbas to swallow," he said. "But, Palestinians, even though they are dealing from a position of weakness, haven’t always known either when stretching to accept the difficult compromise was going to be in their best interest."

Coupled with that stalemate is the growing polarization in the United States around what stance to take about the future shape of Israel and Palestine, Suarez said. A generation ago there was a mix of opinion in both the Republican and Democratic parties, but that is not the case today, he suggested.

"No American president from any party now in the 21st century can see him or herself having a totally free hand in making Israeli policy," he said. "It’s now so enmeshed in domestic politics."

For instance, he said that Republicans are now claiming that President Barack Obama has "thrown Israel under the bus" in his recent attempts to restart negotiations, when what he has really done is simply restate "long-standing U.S. policy."

In addition, the old adage that the United States’ domestic political disagreements end at the water’s edge no longer applies, Suarez said. He noted that leaders of both parties now feel free to approach foreign leaders to form relationships, broker their own deals and make their own assurances "about what the future might look like if they are in power as opposed to the other guys."

The political divisions reach into U.S. religions organizations as well, he said. While leaders of non-denominational and evangelical groups are building new links to American Jewry "around unquestioning support for Israel," he said, "the mainline denominations have risked being painted as anti-Zionist, hostile to future security of Israel … and have tried to be heard on this issue as the space for constructive holding of both sides to account."

Arab Christians – "better educated, more mobile and more connected to the West" – are steadily leaving the Middle East, most of them emigrating to the Americas, Suarez says, while "Muslims in Gaza and the West Bank have been cultivated, organized and enflamed by ever more extreme Islamic elements."

On the ground in the region are organizations like the Episcopal Diocese of Jerusalem, which covers Israel, Jordan, Lebanon, Syria and the Palestinian Territories. The diocese runs St. George’s College in Jerusalem as well as 14 other schools and training centers, two hospitals, four out-patient clinics, four institutes for the disabled and homes for the elderly as well as guesthouses. There are 7,500 members of the diocese.

Suarez told ENS that the diocese’s "value is in being an honest broker, I think, by being perceived as being so out of the hot center of the conflict, but still a stakeholder and very interested in the future of the place."

All the major churches of world have an interest in what happens to Jerusalem but as the conflict gets drawn as more of a Jewish-Muslim divide, "Christians have a chance to be who they are and keep fidelity to their historic presence and profess their care for both of the other people who are contending for that land."

The Episcopal Diocese of Jerusalem does have to contend with "a bit of disequilibrium" in that effort, Suarez said. Its schools "have had a tremendous role in educating the Palestinian elite of all religions and it can’t say the same about the Jewish elite. It is very present and invested in one side of the argument so it has to be careful to keep its bona fides sound with both sides."

Anne K Lynn, AFEDJ executive director, told the audience after Suarez’s presentation that Christians in the Holy Land are its stewards but, they suffer "physical need and emotional isolation."

Lynn noted that the diocese’s schools "embed respect for differences, reconciliation and conflict resolution in their curriculum which is delivered to people of all faith traditions. The Episcopal Diocese is a big tent."

She also called the diocese "an antidote to extremism" and a "respected pillar of stability."

"It preserves the Christian presence and it’s a beacon of hope," she said.

– The Rev. Mary Frances Schjonberg is an editor/reporter for the Episcopal News Service.