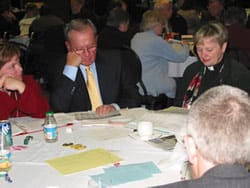 Members of Niagara synod could not pass a 2005 budget. They will meet again this month for a special financial synod.

Unable to pass a 2005 budget at its November meeting, the diocese of Niagara has scheduled a special financial synod for Jan. 8, 2005 at Christ’s Church Cathedral in Hamilton, Ont.

Many delegates at the last meeting, held Nov. 12-13 at the cathedral, were confused by the process used to present a budget to synod, said diocesan treasurer Robert McKinnell. The diocesan budget committee, using a series of priorities that emerged from workshops held around Niagara last year, presented five possible budget scenarios to synod. “People found it challenging to have a number of alternatives from which to choose and were unable collectively to select any,” he commented.

Some delegates also objected to the diocese’s projection of revenues from the parishes – $3.14 million in 2005. “We have heard the concern about the receivables and we need to look at the assessment rates,” said Archdeacon Marion Vincett, Niagara’s executive officer. Each parish is assessed a percentage of its revenues under a formula that allows for certain deductions, she said, adding that the percentage varies from parish to parish. The budget committee combined the five scenarios presented last fall, said Mr. McKinnell, and when synod delegates reconvene on Jan. 8, they will be presented with one option. Revenue projection from the parishes is now at $3,077,200, he said, due to the concerns expressed at the November synod.

The diocese’s revenues have grown from about $2.9 million five years ago, said Mr. McKinnell, but have been subject to a series of strains. Spending decisions made by previous administrations reduced investment funds to the point where the diocese projects just $105,000, or about three per cent, from interest on trust funds. Neighbouring dioceses such as Toronto and Huron receive a larger portion of their budget from investment income, said Mr. McKinnell and Ms. Vincett. “We are still working on restoring the trust fund balances that we borrowed against,” said Mr. McKinnell.

The national residential schools settlement fund, which caps church liability in lawsuits concerning a now-defunct boarding school system for native children, has also created pressure, he said. Niagara has pledged to contribute $1.9 million over five years and began contributions in 2003.

The diocesan office in Hamilton has cut staff and rearranged jobs and hours to be more cost-effective, said Ms. Vincett. About one dozen full- and part-time workers are employed at the office, down from about 15 four years ago.