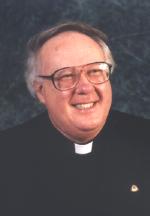 HE’S BEEN bishop of the Diocese of Niagara for two years and he’s visited 97 per cent of its parishes, but Ralph Spence, 58, says he’s just getting over that “new kid on the block” feeling.

“I don’t know when I’ll stop being the new bishop,” he said in an interview at the synod office next to Christ’s Church Cathedral, Hamilton, Ont. “It’s a big adjustment, being the bishop. There are wonderful moments in the job and then there are – other moments.”

A large man, amiable yet intense, Bishop Spence works out of a high-ceilinged office that displays the usual photographs, mementoes and gifts that bishops invariably collect, but also the fruits of his avocation: designing, collecting and researching flags and coats of arms.

His feeling of newness is somewhat ironic, since Bishop Spence grew up in Hamilton and has spent much of his career in the diocese, but he has said it takes a year to figure out the job and another year to figure out what to do. He’s now putting his stamp on the diocese in two important areas: coping with its grave financial problems and building for the future with a fundraising campaign called Survive and Thrive.

One of the older dioceses in Canada, Niagara was trimmed off the diocese of Toronto and founded in 1875. However, the first stirrings of its birth can be glimpsed in 1827, when Bishop Charles James Stewart of Quebec wrote in his journal that “a village seven miles from Ancaster named Hamilton is asking for the services of a clergyman.” Churches had been built on the Niagara peninsula since the late 18th century. Rev. Robert Addison, who arrived as the first resident missionary in Niagara in 1792, was put under house arrest by the invading Americans in the War of 1812 and saw his church, St. Mark’s, burned to the ground.

The first church built on the present-day site of Christ’s Church Cathedral was consecrated in 1842. After renovations and expansions, the cathedral was opened in 1876, with the city’s first Anglican minister, John Gamble Geddes, as dean. Dean Geddes had arrived in Hamilton in 1835 to find part of his congregation meeting in the town’s log courthouse and others holding pews in the First Methodist church. The cathedral’s stone baptismal font was installed in 1890, to commemorate Dean Geddes’ 55 years of ministry during which, it is estimated, he baptized nearly 5,200 persons. It was said that when the first church was being built, people began to call it “Geddes’ Church.” He maintained that it was not “Geddes’ Church,” but “Christ’s Church,” which led to the present name of the cathedral. He died in 1891, age 81.

The 20th century has seen great shifts in the diocese’s demographics, providing both challenge and opportunity for the church, Bishop Spence noted. Where church buildings were once hacked out of the wilderness, now the diocese is “profoundly urban,” with real rural areas only in its northern reaches, he said. Residential and commercial development is exploding in the areas north of Oakville and west of Mississauga as population growth moves outward from Toronto. Total current population in the diocese is about 1.5 million, with concentrations in the industrial cities of Hamilton, St. Catharines and Burlington.

Attracting newcomers – who may or may not be Anglican – is much on Bishop Spence’s mind. “People aren’t denominationally loyal any more. They may move into a subdivision and ask what the local church offers. They go because the kids love going to Sunday school or there is a good youth program or mother is in the seniors’ drop-in centre. People make their decision on whether it is a friendly place and what they are offering.”

At the same time, membership is dwindling in some parishes. Post-Second World War immigration patterns changed the ethnic character of the diocese. “In 1951, St. Catharines was the most Anglican city in Canada,” Bishop Spence said. However, Italian and Portuguese immigration brought Roman Catholics, Dutch arrivals brought the Dutch Reformed church and Ukrainians were members of the Orthodox church, he noted. In 1991, the area covered by the diocese, according to the Canadian census, was 33 per cent Roman Catholic, 15 per cent United Church and 12 per cent Anglican, to cite the three major religions in the area.

“We are encouraging parishes to talk together about how we might do ministry differently. Two parishes in Hamilton agreed to dis-establish and come together in one of the buildings,” he noted.

Another difficult issue is the diocese’s financial problems (see Anglican Journal, April issue). A variety of spending decisions in the last few years have depleted the diocese’s investment fund by $2 million. Bishop Spence is reviewing staff positions at synod office, has cut back the diocese’s 125th-anniversary celebration and negotiated a reduced assessment to the national church, among other measures.

With an eye toward the future of the diocese, Bishop Spence has launched Survive and Thrive, a major fundraising campaign with a goal of $8 million. “Everybody said ‘you are nuts’ to go out on a financial campaign, but we’ve got $2 million. We’re one-quarter of the way there,” he said. Survive and Thrive isn’t meant to build the investment fund back up – that’s what the cutbacks are for.

Half the money is intended to go toward education and training for clergy and lay people, since Bishop Spence strongly believes continuing education should be a priority for future generations of parish leadership. He also wants to see the campaign support training in children’s and youth ministries and explore the creation of shared positions that might serve clusters of parishes. The campaign’s third target is outreach, including university chaplaincy, Missions to Seafarers, poverty initiatives and seniors’ ministries.

Two major controversies in the church today – the question of same-sex unions and ordination of homosexuals, and Native residential-school lawsuits – haven’t been much of a factor so far in Niagara. Bishop Spence describes himself as “a conservative in my theology and a liberal pastorally.” His preference is to deal with the same-sex issues “quietly and slowly, although if someone is being persecuted, that is a different matter.” The diocese has a very small Native population and did not contain any residential schools.

Although much of his 60-hour-per-week job involves administration, Bishop Spence misses parish ministry and often gets out from behind his desk. He has visited most of the diocese’s 115 congregations. His wife, Carol is a retired schoolteacher and they have three grown children.