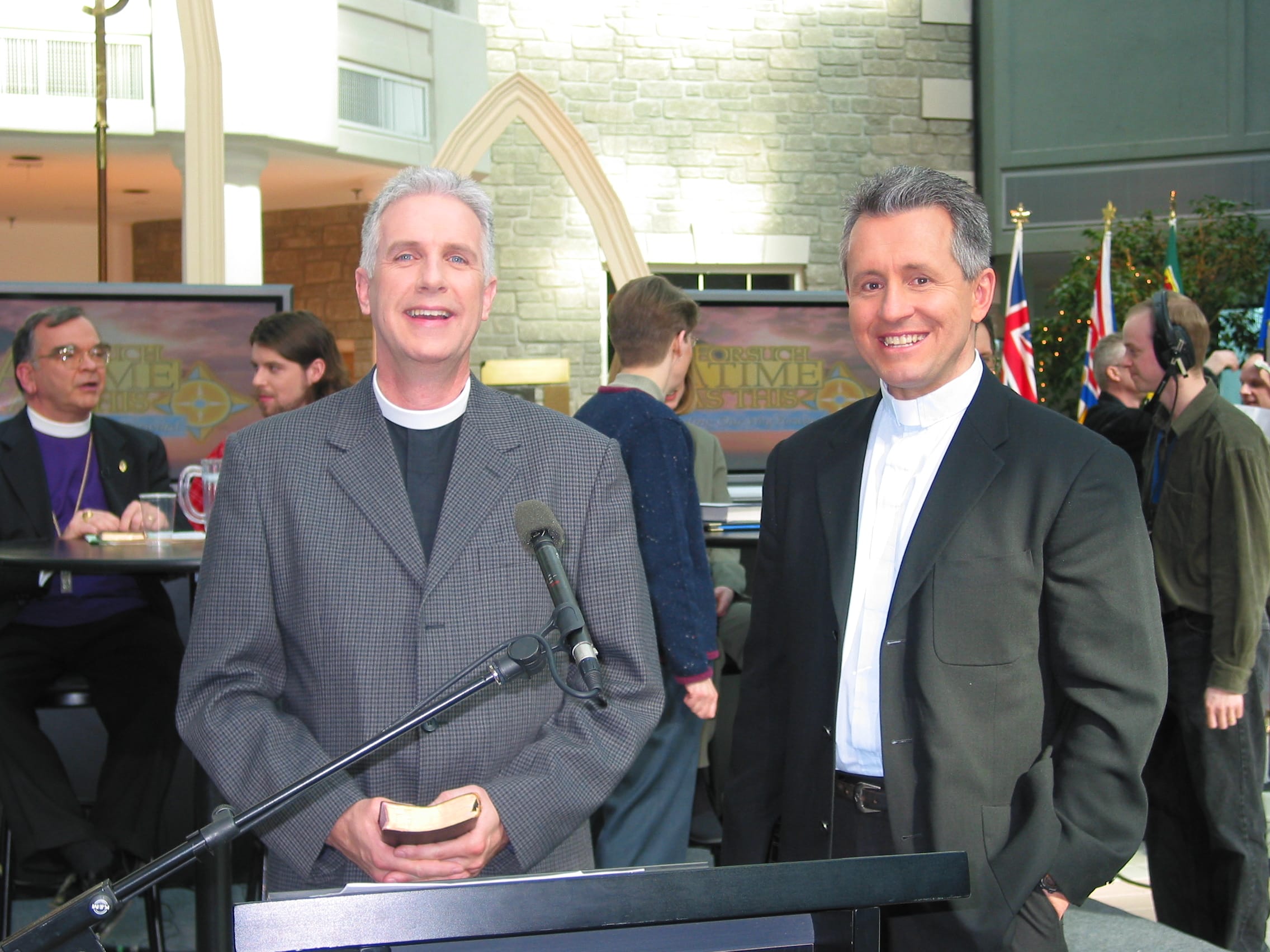 L to R, Canon Charles Masters of St. George’s Lowville (Ont.) Anglican church and Rev. George Sinclair, of St. Alban the Martyr, Ottawa, participated in a teleconference in 2004. Their churches voted on the weekend to leave the Anglican Church of Canada.

Six churches in five dioceses, voting at their general meetings on the weekend of Feb. 16-17, decided to leave the Anglican Church of Canada due to disputes over theological issues, including homosexuality, and join a South American Anglican church.

A seventh congregation, which is not a member of the Canadian church, also voted to come under the jurisdiction of Archbishop Gregory Venables of the Province of the Southern Cone, which covers the southern part of South America. Such jurisdiction is to be administered through retired Canadian bishop Donald Harvey, leader of a breakaway group called the Anglican Network in Canada.

An eighth parish, encompassing the Bearbrook-Navan-Vars congregations in the diocese of Ottawa, saw about 60 of its parishioners leave their church buildings and gather in a private home for worship on Feb. 17. Most of the Navan congregation decided to stay with the diocese. Rev. Alex Lewanowicz resigned from the Canadian church in order to serve under Archbishop Venables; a substitute priest led Sunday services. The churches are Holy Trinity, Bearbrook; St. Mary, Navan and St. Andrew, Vars.

The split was prompted by moves by the majority of the Canadian church toward greater acceptance of homosexuality, but conservatives say the differences are more profound. “All of these churches have acted because they are concerned about what is happening in the Anglican Church of Canada. They are determined to stay true to historic Christian teaching but see the (Canadian church) changing its teaching on fundamental, historic Christian teaching such as the authority of the Bible and salvation through Jesus Christ alone,” read a statement from the network.

Archbishop Fred Hiltz, primate, or national archbishop, of the Canadian church, in an interview with the Anglican Journal, said he does not agree. “The issue is very much focused on issues of sexuality. The Anglican Church of Canada is not in a crisis when it comes to matters of faith such as the divinity of Christ, the incarnation or the resurrection. I don’t know a bishop or a member of the clergy who week by week doesn’t confess their faith in Christ as redeemer and as our savior,” said Archbishop Hiltz.

He said he regrets the churches’ decision to leave, especially since Canadian bishops have agreed to allow conservative Canadian bishops to minister to disaffected congregations in their dioceses. However, conservatives say they want the visitors to have full jurisdiction, which the diocesan bishops refuse to grant. Archbishop Hiltz said he does not intend to consult with legal advisers since “matters having to do with (clergy) discipline and property are primarily diocesan in nature. I would not be interfering in any way.”

Meanwhile, following the weekend votes, the diocese of Niagara moved quickly and on Feb. 19 informed St. George’s and St. Hilda’s that it was appointing new administrators for the parishes and that the clergy were suspended with pay, according to Archdeacon Michael Patterson, the diocesan executive officer.

“I’m still a priest and very committed to St. Hilda’s. My main goal is to keep the family together. The church wanted to face this together,” said Rev. Paul Charbonneau, St. Hilda’s rector, in a phone interview. He mentioned several outreach ministries, such as food deliveries to needy families and a drop-in lunch for nearby high school kids, that he hoped would not be lost. He confirmed that St. Hilda’s had received Archdeacon Patterson’s letter, but declined to comment on the diocese’s move or whether he was considering resigning, as some other Anglican clergy have done.

Canon Charles Masters, the rector at St. George’s, did not return a telephone message seeking comment.

“We believed it was our responsibility to claim the property under the legal jurisdiction of the diocese of Niagara,” said Mr. Patterson. The administrators – Rev. Susan Wells at St. George and Canon Brian Ruttan at St. Hilda – have not yet visited the churches. The diocese also said that the bishop and diocesan lawyers planned to place clergy and wardens “loyal to the Anglican Church of Canada” into the two churches.

In letters to the two congregations, diocesan bishop Ralph Spence and his recently-elected successor, Michael Bird, said “congregations are not at liberty to leave the diocese,” although individuals may do so. “Our canons (church laws) clearly state that those who chose to leave the church cannot take property and other assets with them,” it said.

In an open letter to the diocese after the votes, the Niagara bishops noted that a diocesan representative was welcomed to St. Hilda’s meeting and delivered a statement from the diocese, but was turned away from St. George’s.

In the diocese of British Columbia, the diocesan archdeacon, Bruce Bryant-Scott, acting on behalf of Bishop James Cowan, who was out of the country, brought disciplinary action on Feb. 15 against St. Mary Metchosin’s priests, Archdeacon Sharon Hayton and Rev. Andrew Hewlett.

Archdeacon Bryant-Scott ordered Archdeacon Hayton and Mr. Hewlett not to perform any priestly duties, such as leading worship, not to discuss the matter with any parishioners and to “stay away from the premises of the parish,” according to a diocesan news release. In an interview, he said the priests continue to receive pay and benefits and he plans to meet with them this week.

On Feb. 17, Archdeacon Bryant-Scott appointed himself priest-in-charge of St. Mary’s, led one Sunday service and attended the church’s annual general meeting on the same day. He attempted to chair a subsequent special meeting that had been called to vote on the issue of separation, but the lay leadership challenged his right to act as priest-in-charge and moved the meeting to a non-Anglican church.

In a Jan. 30 letter to clergy, Bishop Cowan said “no parish or congregation in the diocese of British Columbia has any legal existence except as part of the diocese” and that those chairing official meetings are obliged to rule motions for separation out of order.