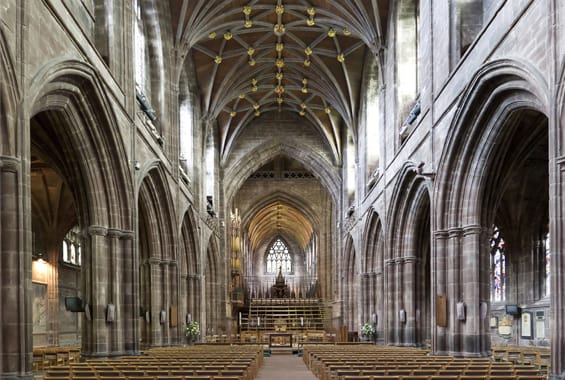 Revitalizing the work of cathedrals in North America is just one of the many recent fresh expressions of church. Photo: posztos

At a time when attendance in many parish churches is declining, attendance at cathedrals is on the rise.

The Rev. Karen Ward of Seattle hopes to inspire both the Episcopal Church and the Anglican Church of Canada to sign onto a three-year Mission Shaped Cathedrals Project (MSCP) to do just that.

Ward, founder of the Seattle-based Episcopal Village, a grassroots emergent church initiative that supports congregations and dioceses in creative outreach, said she was inspired in part by the Church of England‘s Fresh Expressions movement.

"It [the MSC project] is driven by passion for mission with the Episcopal Church. The idea is to expand the ‘mission-shaped’/Fresh Expressions conversation as it is known in the United Kingdom, and apply such principles to the work of cathedrals" in North America, she said via a recent e-mail.

She cited Gloucester Cathedral, among others that employ pioneer missioners like the Rev. Steve Clarke, whose role it is to develop new communities among spiritual seekers not connected to church. In a video posted on the MSCP website, Clarke said he has used the cathedral "as a kind of holy playground" to draw young people, with a variety of events ranging from a monthly feast and a DJ to more structured programs.

In the diocese of Massachusetts, the Cathedral Church of St. Paul is one of 10 that has already joined the MSC project, and hopes to build on established outreach and emergent church programs.

At least two of the cathedral’s "five-and-one-half communities" — Ecclesia and The Crossing — are considered fresh expressions, reaching out to the homeless and to young adults, respectively, said the Very Rev. John P. Streit, cathedral dean.

Ecclesia was recently featured in a five-part video series, produced by the Episcopal Church’s Office of Communication and Office of Congregational Vitality, which highlighted thriving congregations throughout the country.

Founded in 1996, and also known as the "Common Cathedral," Ecclesia gathers anywhere from 20 to 120 of "the housed and unhoused" on Boston Common, across the street from the cathedral, at 1 p.m. on Sundays for worship, according to the Rev. Kathy McAdams, rector, in the video.

"We are the church outside with the people who live outside," she added. "People say, ‘why don’t you get a building of your own?’ That’s not it. We’re here in solidarity with people who can’t or won’t come inside.

"We’re able to be a lot more welcoming by not having a door that someone has to walk through. It makes worship more fluid. A lot of our regular congregation has said they walked by and found us and joined in. Not having a building means we don’t have to maintain that building; we’re able to be out on the streets every day and run a lot of programs for a small amount of money, programs that organically grew up."

Programs include "Common Art," an open studio space stocked with art supplies for those who desire to use it, and City Reach, an urban immersion program that draws youth and young adults from across New England.

The Rev. Stephanie Spellers, a priest at Boston’s St. Paul’s Cathedral and author of "Radical Welcome: Embracing God," says there are two ways to understand the role of cathedrals in the life of a diocese. One, "almost like the repository or the model of the best of the best of traditional Anglican expression. There’s also the picture of the cathedral as the community that leads a diocese in mission, that stretches into the frontier and invites the rest of the diocese" to follow suit, she said.

She began The Crossing in April 2006. The 6 p.m. Thursday service in the cathedral chancel encompasses Anglican chant to R&B, Anglocatholics to Pentecostals, includes lay preaching and spontaneous prayer, along with art, music and talk stations to help absorb Scripture and other readings. It appeals mostly to 20- and 30-somethings, she said.

"It is led by a multicultural community, with a definite African-American tradition and we weave in those with other Anglican voices. It is identifiably Anglican but at the same time, it stretches the Anglican tradition to meet a group of people our church has had a lot of trouble doing mission with," she said. "At least half are not Episcopalian but we come out of a desire to explore these traditions and make them real in our community. There’s spiritual practice, anything from dance to singing spirituals to contemplative centering prayer. It’s more fun than you’re supposed to have in church but it is also deeply, deeply sacramental."

The Crossing is its own congregation, has its own leadership, and its own budget, "everything that a church would do except manage a building and that’s where our relationship with the cathedral is just essential," she added.

Cathedrals also tend to have the "flexibility that a parish doesn’t have in terms of reaching out" and of incorporating a broader identity. "It’s already in the DNA of a cathedral to think bigger than a particular location and to really carry the mission of the entire diocese as its own," she said.

But Ecclesia and The Crossing are "are just the tip of the iceberg" in terms of possibilities for mission, Ward said during a recent telephone interview. "Cathedrals have huge potential that is not being actualized."

Through the project, she hopes to raise awareness, both about existing creative ministries and also about new possibilities for cathedral outreach, she said.

"There’s a lot of things happening in our cathedrals but people don’t know about it, and they don’t seem to have any way to disseminate the information or to file-share. This would be a way of introducing them to what others are doing and sharing, like a marketplace for missional ideas."

The project would help cathedral deans, and through them, their congregations, begin to take the risks necessary to start outreach ministries. "Some are already doing this," she acknowledged. "Like kindling, I want to be able to blow on the sparks that are already out there and help turn them into flames."

The Rev. Charles Robertson, canon to Presiding Bishop Katharine Jefferts Schori, said via e-mail that the mission-shaped cathedrals project "is an exciting work that could provide a wonderful opportunity for growth and new mission possibilities for our cathedrals."

The Very Rev. Dr. Logan McMenamie, dean of Christ Church Cathedral, Victoria, in the Anglican diocese of British Columbia said he is hoping the MSCP will help the cathedral "consider how we can engage the city in a new way."

The cathedral already employs a priest for the city whose role it is to engage the business community in conversations about the role of the cathedral in the city. "People usually talk about history, tradition, architecture.. We try to push them into talking about more, about what other values we offer," he said.

Similarly, a deacon for the city engages the marginalized. "It’s not how we can get people into the church, but how we can get the cathedral outside of itself, to what is happening in the city," he said.

"It’s still in the very early stages. They take part in the usual liturgical things on Sunday, but their main function is to look outside of the cathedral to see what’s happening in other places.

"We try to look at mission in a different way, to move from the colonial model of mission, the colonial idea that we’re the ones who know God, that God is part of our culture and we’re bringing God to you, to challenge people that God was here when we arrived and how do we help discover God’s presence outside of church."

For the Very Rev. John P. Downey, dean of the Cathedral of St. Paul in Erie, Pennsylvania, MSCP is an interesting possibility, since "cathedrals are places that are very well-established in traditional forms and thriving pretty well in most places."

Cathedral attendance and vitality are reportedly growing in England and "it’s my impression that they are doing pretty well in the United States and Canada, too," he said.

"We’re in a time when it’s important to be trying lots of different things while at the same time maintaining things we’ve been doing, as best we can," he said. But he added that it will be both interesting and challenging to see what the future holds for "fresh expressions and emergent church worship.

"The question will be about sustainability and how Fresh Expressions will sustain itself over time as people become part of it and it grows and develops and changes," he said during a recent telephone interview.

In addition to Ecclesia and The Crossing, St. Paul’s offers a Chinese-language ministry, two traditional services, and a Muslim prayer group. Yet, he believes more can be done. "We need to be more intentional, to always be thinking what more might we do to be more welcoming and supportive of these communities," he said.

At a May gathering of cathedral deans in Houston, at which Ward presented the idea for the project, there was a "sense that a lot of deans were struggling with these issues," Streit recalled. "People have the sense that cathedrals can be places of experimentation, and maybe they have a little more latitude to try things that you might not try in a parish."

The challenge for cathedrals, added Streit, is: "How do we maintain where we’ve been with what God is calling us to do that may look very differently from what we’ve been doing, and how can we have the faith and courage to move into that?"