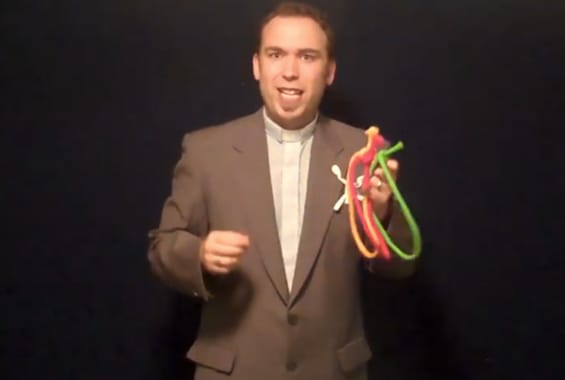 The Rev. Kyle Norman: “I make it clear that I do tricks but Jesus does miracles.”

Prestidigitation in the pulpit? Well not quite, but the Rev. Kyle Norman is a gifted amateur magician who uses a bag of some 50 magic tricks to help kids understand the Gospel.

It’s called Gospel Magic and he’s been doing it regularly at his church for the past year without repeating a routine trick. “We have a children’s time at the front of the church before the service and that’s when I perform,” says the rector of Holy Cross Anglican Church in Calgary.

As a youngster, Norman watched magic specials on TV and thought they were cool but he never had any aspirations to become the next David Copperfield. “It was actually my father who started me on magic. He’s a priest in North Battleford, Saskatchewan, and he would play a little trick for children primarily at funerals to relieve their boredom,” he says. Norman also picked up the trick-the classic vanishing handerkerchief-to amuse the kids during funeral receptions when the adults were busy chatting.

Next, he added a spiritual twist: “I’d say, Jesus makes our sins disappear like this handkerchief. Then it just kind of steamrolled after that.”

His favourite shtick and the biggest crowd-pleaser in his two basement shelves’ worth of tricks? “It’s one called “always having Jesus in our hearts,” where a sponge ball goes underneath a cup and I take the ball out from under the cup but it keeps on returning,” he says.

Norman, who sometimes calls himself Mr. K., has also performed at his son’s school, a clergy retreat and a friend’s Easter party but “by no means am I considering going on the corporate circuit.” When he first started magic, he concedes, “some parishioners came in with some very appropriate questions. ‘Are you making Jesus into just a magician?’ ‘And what about the language of magic and the occult in the church? ‘Are you leading the kids down a dangerous path?'”

So he never uses the parlance of magic in the church, No abracadabra, no hocus pocus, no Harry Potter. “I just say, I want to show you a trick, something interesting.’ I make it clear that I do tricks and games; Jesus does miracles. And that provides a teaching moment to explain the differences between ourselves and God.”

Norman is passionate about this valuable teaching tool and if further objections were raised, he says he would “really engage the conversation in a very intentional way.”

To see Gospel Magic in action, go to: http://reverendkyle.posterous.com/gospel-magic-all-about-jesus