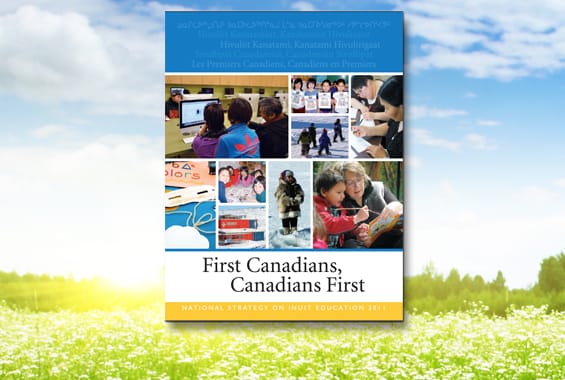 As Canada’s Inuit emerge from the long shadow of the residential-school experience, the national Inuit organization Inuit Tapiriit Kanatami (ITK) has released a comprehensive blueprint for education. First Canadians, Canadians First: National Strategy on Inuit Education (NSIE) 2011 was made public in Ottawa on June 16 by national Inuit leader Mary Simon.

“The reality of Inuit education in Canada is that too many of our children are not attending school, too few are graduating, and even some of our graduates are not equipped with an education that fully meets the Canadian standard,” said Simon in her chairperson’s message.

During two years of intense preparation, NSIE researchers consulted parents, youth, education leaders and policy specialists from across Inuit Nunangat and concluded that the key to improving educational outcomes for Inuit lies in three core areas:

The strategy seeks to close the education gap between Inuit and other Canadian youth and to get Inuit parents behind the new educational momentum. “Our vision is to graduate bilingual Inuit children with the skills and knowledge to contribute with pride and confidence to the 21st century,” said Simon. “However, no strategy will walk children to school, no strategy will ensure that children arrive in class well fed and well rested. This role falls to parents and guardians. We will need their continued support if we are to succeed in transforming our education systems.”

She added that any plan must restore the trust of those parents deeply hurt by their own educational experiences. “We must build an education system grounded in the Inuit culture, history and world view, and with respect for the role of parents.”

For the full report, go to www.itk.ca and click on National Strategy on Inuit Education under Dispatches.