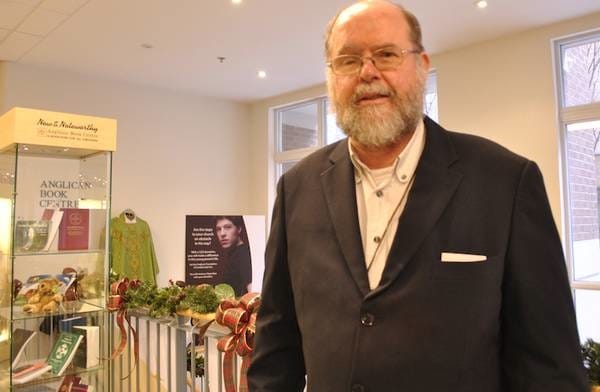 It was Sunday evening. The House of Bishops was gathering for its fall 2011 meeting at Mount Carmel Spiritual Centre in Niagara Falls, Ont. Standing in the dining room, I caught my first glimpse of Father Michael Lapsley, an Anglican priest from South Africa who had been invited to lead us in reflection on the nature and work of reconciliation.

Michael has no hands. They were blown off when he received a letter bomb in Zimbabwe, where he was living in 1990. He also lost an eye in the attack and suffered significant hearing loss.

Michael described his journey from victim to survivor to victor-a movement from horrific physical and emotional pain to months of rehabilitation, and finally to living life “as fully and joyfully as possible.” Through the many messages and assurances of prayer that he received, he “felt loved by the people of the world.” He expressed deep gratitude for the many notes from Canada and especially for a collection of pictures painted by children from North Bay in Ontario. “The walls in my hospital room,” he said, “were papered with love.”

In the course of recovery, Michael had to discern the nature of his priestly vocation for the future. Archbishop Desmond Tutu, the spiritual giant of the road to freedom from apartheid, encouraged Michael in his work with victims of trauma, who longed for the healing of their bodies and minds and their very souls. At the Institute for Healing of Memories, which Michael heads, personal stories of trauma are “reverenced.” Those who come to the institute speak of “recovering their humanity” and “daring to hope” again.

We were deeply moved by Michael Lapsley’s presence and the grace through which he lives and ministers in the name of Christ. His story is a testament to the power of prayer, the gift of companionship, the beauty of reconciliation and the recovering of our humanity in the sight of God.

Archbishop Fred Hiltz is primate of the Anglican Church of Canada.