With the 500th anniversary of the beginning of the Reformation this year, many are marking the occasion using an item not often associated with theology: a child’s plastic toy.

In 2015, German toymaker Playmobil launched a new figurine in advance of the anniversary year: a 7.5-cm Martin Luther, wearing a scholar’s gown and holding a German Bible in one hand and a quill in the other.

“Little Luther” turned out to be an enormous hit for Playmobil; soon after its release, the figurine became the company’s fastest-selling toy ever;  last month, Playmobil announced it had just shipped its millionth copy.

At some point, Luther enthusiasts hit upon the idea of photographing the toy at various places they found themselves, and posting the photo on Twitter and Instagram.

The idea caught on, and the hashtag #littleluther now conjures up myriads of Luther toys in the most varied spots—in church

sitting on a Bible opened at a favourite verse

and at some of the world’s most famous landmarks.

Among Little Luther owners are the Rev. Dawn Leger, an Anglican priest who serves as pastor at First Evangelical Lutheran Church, Toronto; and the Rev. Mark Kalvaitis, pastor at St. Paul’s Evangelical Lutheran Church in Richmond Hill, Ont., both of whom will be in Wittenberg, Germany, this summer to take part in the 500th anniversary of the Reformation commemoration.

“I took him with me when my husband and I travelled all over the country, so I’ve got pictures of him barbecuing sausages and checking out a lighthouse!” Leger says with a laugh. “It’s been really fun.”

But the Little Luther phenomenon also has a more serious spiritual side, Kalvaitis says: bringing the toy along to take part in everyday activities demonstrates the idea of living your faith daily.

“It’s a sign of taking your faith outside of just a Sunday morning, of having something that can be applicable to every aspect of your life,” he says. 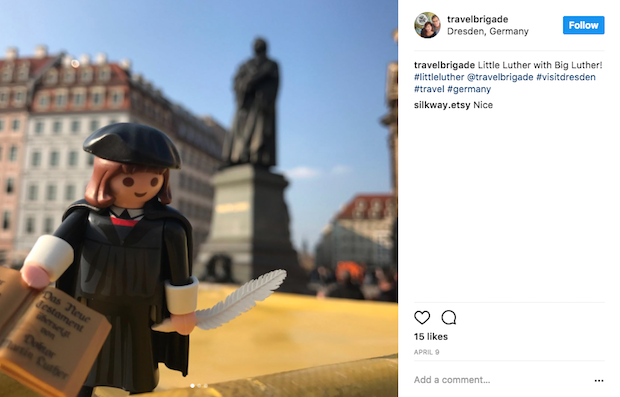 The toy has been dogged by some controversy. Last June, retired German education professor Micah Brumlik asked why the opened Bible that Luther is holding reads (in German), “The New Testament, translated by Doctor Martin Luther” on the page to the right, and “Books of the Old Testament. END.” on the page to the left. The prominently-written “END.” could be taken to mean that the Old Testament, the Jewish Bible, is outdated and done with, as many Nazis argued, he said.

Others, including a group of German Protestant theologians, added their voice to Brumlik’s, and since then the “END.” has been removed from new copies of the toy.