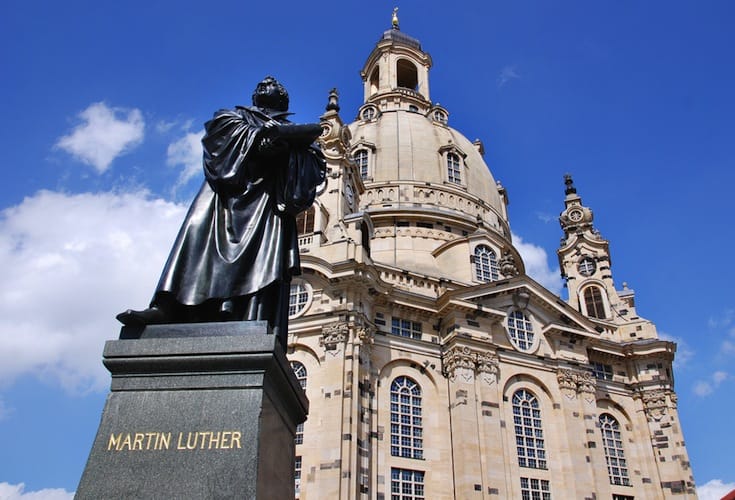 The Lutheran World Federation (LWF) and the International Lutheran Council (ILC) are discussing joint commemorations of the 500th anniversary in 2017 of the Protestant Reformation. Photo: Meunierd

Geneva – Representatives of the Lutheran World Federation (LWF) and the International Lutheran Council (ILC) said they will continue discussing joint commemorations of the 500th anniversary in 2017 of the Protestant Reformation.

In a communique following their annual meeting, March 27-29 in Geneva, the ILC and LWF stated they had discussed a number of positive developments that had taken place among their member churches since they last met in 2008. In view of the Reformation anniversary, they expressed the hope to work together through seminars, educational events and publications, and agreed to update each other on their continuing plans, according to a news release from the LWF.

"Both the ILC and the LWF thanked one another and affirmed the positive spirit of the meeting in which frank and candid conversation could be shared about mutual concerns, while building upon a common Lutheran heritage in Christ’s Church," the communique stated.

The meeting was hosted by the LWF and co-chaired by General Secretary the Rev. Martin Junge and Interim ILC Executive Secretary Ralph Mayan.

Mayan reported that the ILC will consider at its September 2012 Conference, the LWF Council invitation to join in the "Mennonite Action" of repentance and reconciliation, which Lutherans and Mennonites endorsed at the July 2010 LWF Eleventh Assembly in Stuttgart, Germany. Junge pointed out that the action had proved to be a profoundly moving experience, which "resulted in unexpected fruits including a new trilateral dialogue on baptism involving the LWF, Roman Catholics and Mennonites."

Discussion also focused on a number of local situations where tensions have occurred, particularly in the Philippines, Papua New Guinea and the United States, with the meeting encouraging "ongoing communication in all these situations." With respect to the Lutheran Church in the Philippines, the LWF and ILC representatives agreed to send a joint letter to the church, encouraging continued dialogue toward reconciliation, the LWF said.

Also discussed were a number of theological topics including the different expressions of faithfulness to Scriptures, the meaning of "confessional Lutherans," human sexuality, ministry and biblical hermeneutics.

Wittenberg, Germany, was suggested as a possible venue for the next meeting, scheduled for November 2013.

The ILC and LWF meetings are held under the auspices of a 2005 "Memorandum of Understanding," which agreed to regular gatherings to increase mutual understanding between the two Lutheran world bodies and their member churches.

The ILC was established in 1958 as an association of confessional Lutheran church bodies that support one another and study theological issues together. Founded in 1947, the LWF currently has 145 member churches. Some of the LWF member churches also have membership in the ILC.