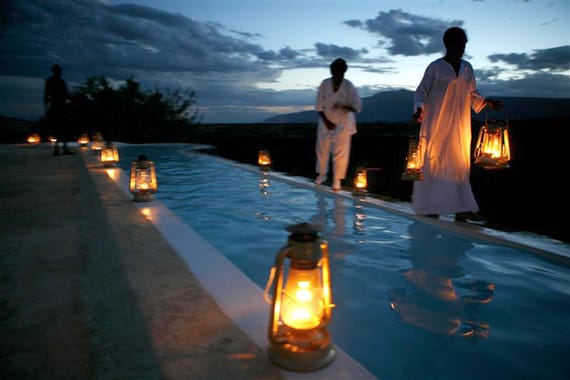 A Maasai waiter brings lanterns to be placed around the swimming pool at little Shompole, a luxury eco-tourism lodge near Nairobi. Photo:REUTERS/Radu Sigheti (KENYA)

"Biodiversity works like a magnet for tourism. Yet, ironically, it is also one of its greatest victims," said the Ecumenical Coalition for Tourism, in a statement released on September 24 ahead of World Tourism Day on September 27.

The coalition is made up of regional ecumenical organizations and other groups. It is based in Chiang Mai, Thailand, and aims, "to promote socially, ecologically and ethically responsible tourism".

"Saturation mass tourism, with its impact on the environment, does not help biodiversity," the coalition said. Such tourism disrupts ecosystems’ delicate balance as contributing to the loss of forms of life.

"At the cost of countering the growth-without-limits economic philosophy, the tourism industry needs to understand that a tourism built on no limits to tourism numbers and destinations that places undue pressure on the environment cannot be sustained indefinitely," the coalition added.